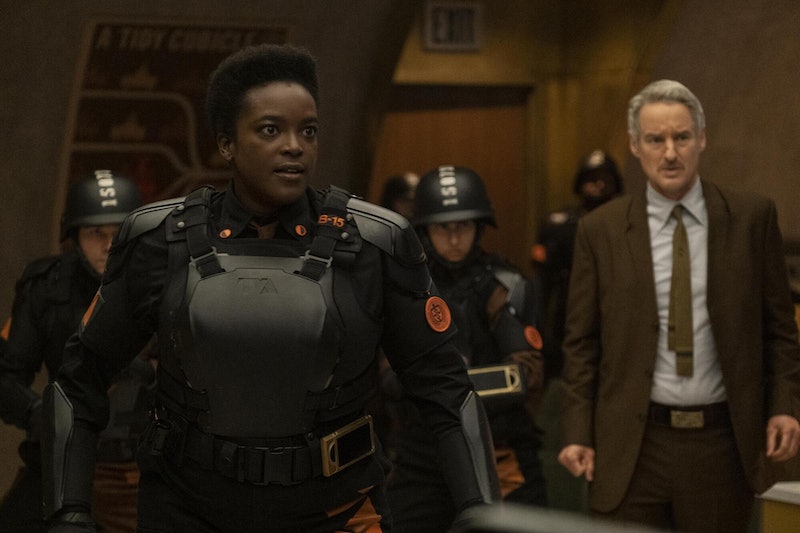 Following the events of 2019’s Avengers: Endgame, the Marvel Cinematic Universe (MCU) has fully embraced time travel. In fact, it’s the backbone of Marvel’s newest Disney+ series, Loki. Fans will recall that Loki died in 2018’s Avengers: Infinity War, but thanks to the time travel storyline in Endgame, the God of Mischief is now alive and well in the show. He’s currently wielding the Tesseract, which he used to escape through an interdimensional portal before he could be hauled off to an Asgardian prison. Loki will follow that iteration of Loki, as well as the organization tasked with stopping him: the Time Variance Authority.

So...who exactly are the TVA? Here’s what to know.

What Does The TVA Do?

The Time Variance Authority (TVA) is a bureaucratic organization that exists outside of time and space, overseeing any and all timelines within the Multiverse. They govern countless realities, keeping tabs on all time and existence. Their job is to manage the policies of time, intervening when timelines are tampered with and opening investigations into the sanctity and flow of time itself.

Who’s In The TVA?

Their roster includes Judge Ravonna Lexus Renslayer (played by Gugu Mbatha-Raw) as well as two soldiers, Hunter B-12 (Wunmi Mosaku) and Hunter C-20 (Sasha Lane). One of the superiors in the organization is Mobius M. Mobius (Owen Wilson), an agent of the TVA who specializes in investigations that involve particularly dangerous entities and criminals, like Loki. To carry out its services, the TVA uses generic beings called Chronomonitors, each of whom are tasked with monitoring a specific timeline. They observe and watch for timeline splits before calculating the probable consequences of the deviation. With each new timeline split, a new Chronomonitor springs to life. On top of that, the TVA also has its own mascot: an adorable holographic clock called Miss Minutes.

Why Is The TVA After Loki?

When the 2012 version of Loki steals the Tesseract and disappears into a cloud of space dust — as one does — he causes a massive fissure in the timeline, thereby garnering the attention and frustration of the TVA. Based on the trailer, the TVA has labeled Loki a ‘variant,’ having split from his original timeline, essentially fracturing reality. In order to protect the proper flow of time, the TVA utilizes Loki as both hostage and partner to restore the appropriate flow of time.

What’s The TVA’s Story in the Comics?

The TVA made their first comic appearance in 1986, showing up in Thor #371. Existing in the Null-Time Void, a dimension in a pocket outside of time, they serve essentially the same purpose in the comics as they do in the MCU: they monitor realities throughout the Multiverse and keep temporal disruption to a minimum.

However, the TVA has an even bigger roster of high-ranking officials than Loki appears to feature. Characters like Justice Peace, Justice Love, and Justice Goodwill are part of an expansive list of justices who help govern the agency. There’s also Mr. Alternity, the highest ranking member of the TVA. They’ve all been known to cause the same temporal problems they’ve vowed to prevent.

Comic book iterations of the TVA help to fill in the finer details of the agency itself. For instance, all TVA employees are given lifetime employment. Employees are created to uphold their specific responsibilities, and are cloned from the same genetic stem to maximize efficiency. The comics also introduce complex entities called the Time-Keepers, who appear in the Loki trailer and will assumedly be a key part of the show. The Time-Keepers are semi-humanoid beings created by He Who Remains, the final director of the Time Variance Authority. He created them just before the heat death of the universe in order to guide the next universe in a better direction. However, the Time-Keepers turned out to be all-powerful, amoral beings, forsaking their original purpose and forming an alliance with Immortus (aka Kang The Conquerer), a time-traveling villain currently positioned as the villain of Ant-Man and the Wasp: Quantamania.

The reason any of that matters is because according to the Loki trailer, the Time-Keepers created the TVA, and massive monuments to the Time-Keepers can be seen throughout the trailer. This means the MCU could be using the TVA to introduce some of its most powerful and limitless characters to date. Which brings us to...

How Will The TVA Connect to the Broader MCU?

In the comics, the TVA has ties to Thor, Wanda Maximoff, Doctor Strange, Kang The Conquerer, the X-Men, the Fantastic 4, and She-Hulk, all of whom either already exist in the MCU or are slated to appear in future MCU shows and movies. Oddly enough, they don’t have an expansive history with Loki, encountering him only once briefly during a Wolverine-centric comic. Their introduction here seems like an organic and useful way to tether together the rapidly expanding MCU — and Loki seems like it’s on the verge of unlocking, if not completely rewriting, the MCU’s potential.

More like this
'Bridgerton' S3 Teases Exciting Social Season For Penelope Featherington
By Bustle
You Definitely Know The Voice Of Shuri's AI In 'Black Panther: Wakanda Forever'
By Brad Witter
Everything To Know About 'Andor' Season 2
By Gretchen Smail
The First Trailer For 'That '90s Show' Includes So Many Nods To The Original Series
By Jack Irvin, Alyssa Lapid and Grace Wehniainen
Get Even More From Bustle — Sign Up For The Newsletter