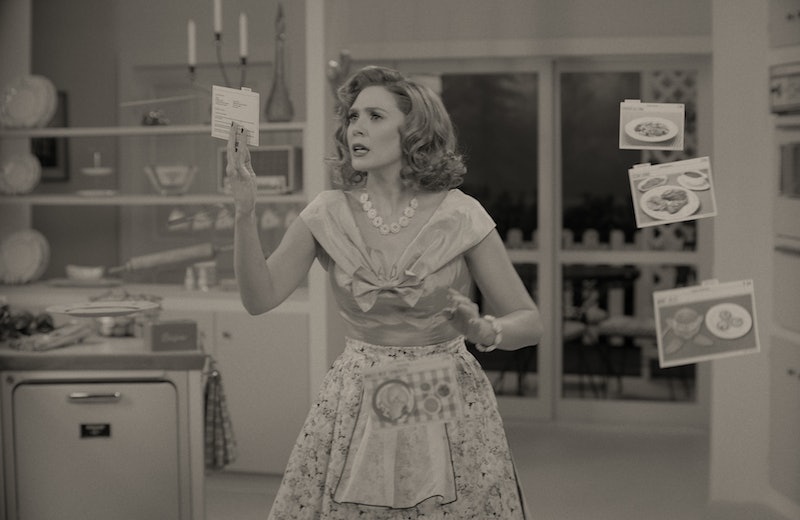 Out of all the upcoming Marvel shows, Disney+'s WandaVision is likely the strangest. At base level, it's a magical sitcom that pays homage to classic TV shows and follows the domestic life of Vision (Paul Bettany) and Scarlet Witch, aka Wanda Maximoff (Elizabeth Olsen). But there's something very wrong bubbling beneath the surface, and it all ties back to what happens to Wanda in the comics.

The first thing to understand is that Wanda's origins are very different compared to what you see in the Marvel Cinematic Universe (MCU). Per Vox, her origin story was first fully explored in the 1979 issue Avengers #185. Writers David Michelinie, Steven Grant, and Mark Gruenwald explained that Wanda and her twin brother Pietro were born at a place called Wundagore Mountain and birthed by a sentient cow named Bova the Midwife. Their mother was named Magda but their father was the mutant villain Magneto — yes, that Magneto. Abandoned by both, Bova handed the twins off to the Maximoffs, a Roma couple; later, the twins were chased out of town when Wanda's powers accidentally started a fire that killed their adoptive parents.

This tragedy led the twins to their first comic book appearance in Stan Lee and Jack Kirby's 1964 issue The X-Men #4. By then, they'd become members of Magneto's Brotherhood of Evil Mutants; they didn't fully buy into Magneto's human-hating ideology, but Wanda felt they owed Magneto for saving them from an angry lynch mob. At the time, Wanda's powers were explained as "hex powers" that used probability to make random events happen. After breaking away from Magneto and joining the Avengers, she eventually learned witchcraft from the witch Agatha Harkness. Her powers were then redefined as "chaos magic," which vaguely meant that she could use it to, among other things, alter reality. (Notably, Kathryn Hahn's WandaVision character, Agnes, has been speculated to be Agatha.)

Wanda soon fell in love with her teammate, Vision, with whom she briefly retired from the Avengers and even had twin sons created by her magic. But their domestic bliss didn't last: as Wanda's powers grew, her mental health worsened. (A lifetime of tragedy doesn't mix well with limitless power!). The "death" of her magically-created sons was her breaking point, and it culminated in the 2005 story event "House of M" and its follow-up, "Decimation." At that point, Wanda's powers allowed her to warp reality on a planetary scale, and she used it to create a whole new reality where her sons were alive and everyone had their greatest wish granted. When the Avengers and X-Men tried to confront her about it, she got angry and wiped out all mutants in retaliation. The good guys eventually fixed everything, but that act made Wanda a pretty reviled figure for years. Eventually, she was brought back into the fold by her sons, who were re-born as real boys and became members of the Young Avengers.

That's just a surface-level look at Wanda's deeply complicated comic book history, none of which was part of her live-action introduction in the 2015 film Age of Ultron. At the time, Marvel still didn't have the rights to any of the X-Men characters, so Wanda was just introduced as a Sokovian orphan who got telekinesis powers from HYDRA experiments. Because MCU Wanda didn't have the power to change reality, both her loved ones, Vision and Pietro, were permanently killed in battle.

And that brings us to the start of WandaVision. Though Vision was killed by Thanos in Avengers: Infinity War, he's somehow alive in the show. It's implied that, as in the comics, Wanda created a new reality to try to hold onto her lost love. The X-Men rights reverted to Marvel in 2019 with the Disney-Fox merger, so is WandaVision a way for the MCU to finally bring in Wanda's original powers and origin story? Possibly. The trailers shows glimpses of her manipulating the living room and holding twin boys, so the creators are definitely weaving in aspects from the comics. And while merging MCU Wanda with comic book Wanda opens the door for an eventual X-Men introduction, it also means that, unfortunately, Wanda's woes are far from over.