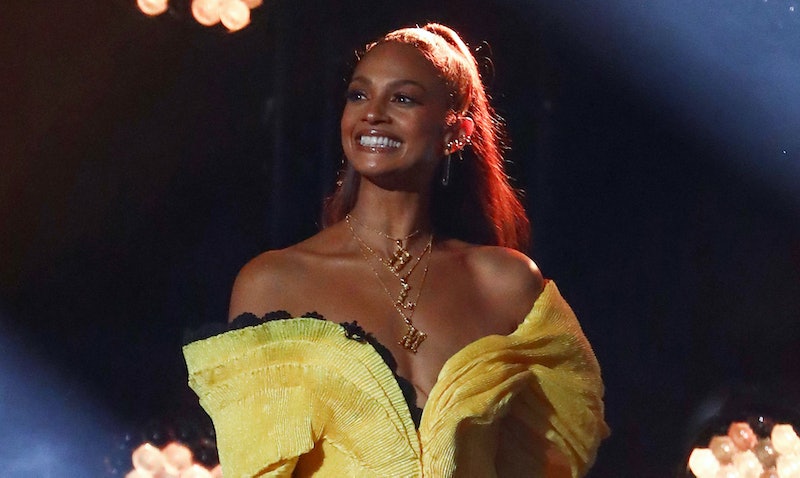 Following Diversity's landmark Britain's Got Talent performance on Sept. 5. 2020 and the subsequent backlash it received, Alesha Dixon made her position clear by wearing a Black Lives Matter necklace during the show's semi final. The performance from fellow judge Ashley Banjo saw 24,000 complaints to OFCOM and Dixon's subtle gesture also clogged the watchdog's phone lines with complaints. Regardless, the singer's choice of jewellery was praised all over social media and has left many of us wanting to know exactly where the beautiful BLM necklace came from.

Ahead of the Britain's Got Talent semi-final on Sept.19, Dixon shared a close up of the three-layered gold BLM necklaces on Instagram. She didn't provide a caption in the post, preferring to let the outfit do the talking.

The stunning gold pieces were made by jewellery brand Veiled Rebel. The Black-owned, London-based company is run by the Alison Morris who aims for the brand to celebrate "individuality" and inspire customers to "express [themselves] freely."

Per the Veiled Rebel website, Morris started off as a solicitor before becoming a jewellery designer and, looking at her gorgeous collection, I would say the job switch is a great idea.

It's not the first time Dixon has worn Veiled Rebel jewellery. The performer wore the brand's Duo Claw Maxi Earrings and Claw Maxi Ring on a previous BGT also.

Though there was backlash to the necklace, many people loved Dixon's show of support. One person tweeted, "I didn't think I could love Alesha Dixon more ... but that BLM necklace is a mood & a vibe." Another viewer wrote "living for @AleshaOfficial's BLM necklace" and podcaster Michael Morgan wrote "Alesha Dixon said #BlackLivesMatter literally with her chest..."

Dixon isn't the only person that has been defiant in their support for Black Lives Matter. Ofcom announced it will not be pursuing BGT complaints, and have published their full report to explain why. ITV also took out a full-page ad featuring a photo of the performance which read "ITV. Stand with Diversity."