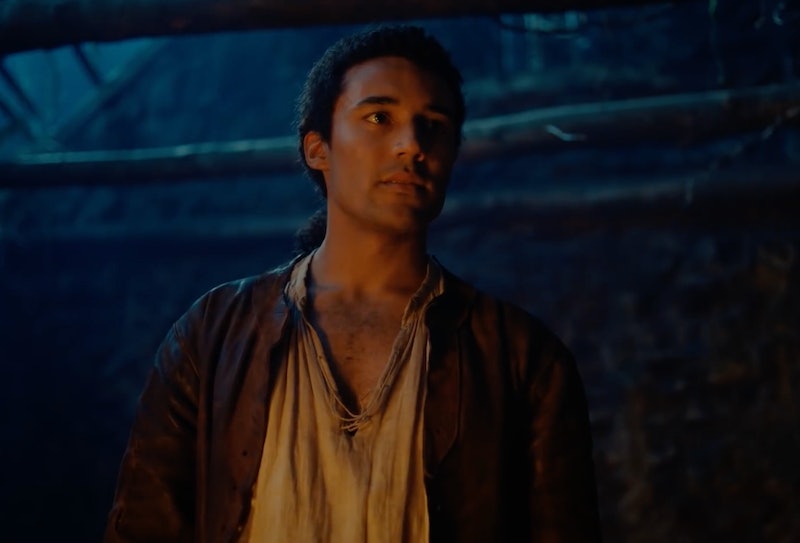 While Netflix's Cursed focuses almost exclusively on the story of Nimue (Katherine Langford) — otherwise known as the Lady of the Lake — many prominent characters from Arthurian legend also make an appearance. From Merlin, to Guinevere, to Lancelot, and, yes, king Arthur himself. In making Nimue the center of the story in this prequel, Cursed's Arthur (Devon Terrell) is shown in an interesting, new light. One where he supports Nimue, who is wielding Excalibur long before him.

Cursed — which is based on the graphic novel of the same name —follows Nimue, a young woman descending from Fae ancestry. At the beginning of the series, Nimue is tasked with delivering a mythical Sword of Power to the fabled wizard, Merlin (Gustaf Skarsgård). To do that, she'll have to navigate her way through a treacherous battle between the zealous Red Paladins, hell-bent on waging war against "demons" (read: anybody able to wield magic), and the Fae, her own people driven to becoming refugees as the Red Paladins move to eradicate her kind. She's not journeying alone, however, as she's joined by none other than a sellsword named Arthur, who she meets very early on in the series.

When Nimue meets Arthur, he's a long way from his destiny as a future King. Rather, he's singing a song for a growing crowd at a marketplace, a love song about a woman that he quickly changes to be about Nimue upon seeing her for the first time. He manages to run into Nimue a few times after that, before officially joining her in her quest to deliver the Sword of Power to Merlin. He becomes something of an ally and traveling companion for Nimue, who's on a dangerous, seemingly doomed path towards ever-increasing dangers.

Terrell, who spoke with SciFiNow about his character, emphasizes that his Arthur is very far from the highly-confident Arthur of legend. "The character of Arthur [in Cursed] is a young mercenary who makes many mistakes. He’s continually trying to break down his walls and build new foundations and through Nimue, that’s what he discovers," says. "He’s definitely not the ‘knight in shining armor’ or the perfect guy. There’s a charm to him with the continuous mistakes he makes."

Also, stalwart fans of the original King Arthur legend should note that this quite a departure from that fable. As Terrell contiually stressed, Cursed isn't Arthur's story, it's Nimue's, and that very much influenced how he played his role. "I wanted to play him as 'Arthur.' I didn’t want to play him as this potential king – don’t expect him to go on to that journey," he says.

More like this
Netflix Shut Down 'Bridgerton' S3 Rumours About A “Very Dark” Storyline
By Bustle
'Wednesday' Star Emma Myers Thinks A Wenclair Storyline Is “Possible” In Season 2
By Alyssa Lapid
You Might Want To Rewatch This Key 'On My Block' Scene To Understand 'Freeridge'
By Grace Wehniainen
The 'Freeridge' Cast Shared Their Hopes For A Potential Season 2
By Grace Wehniainen
Get Even More From Bustle — Sign Up For The Newsletter
From hair trends to relationship advice, our daily newsletter has everything you need to sound like a person who’s on TikTok, even if you aren’t.