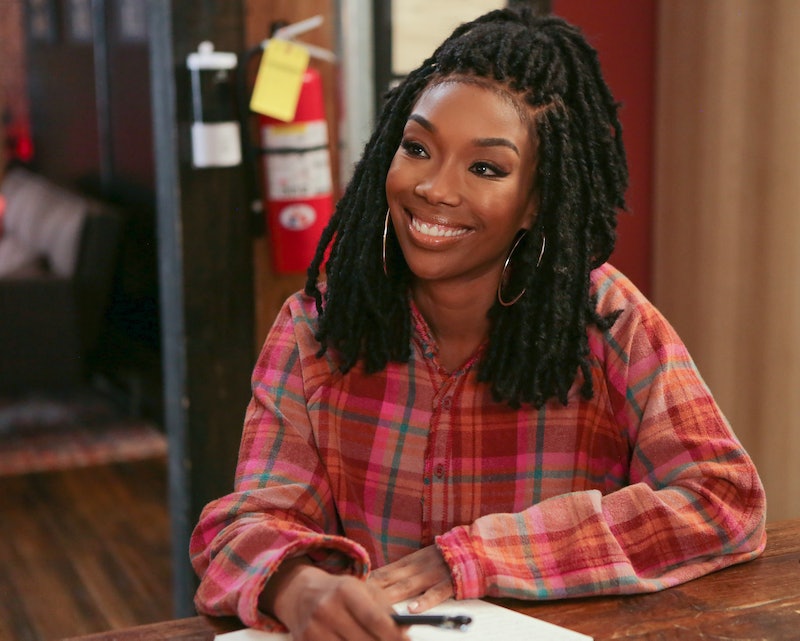 For nearly three decades, Brandy has remained one of the most revered and hard-working entertainers in pop culture. At 15 years old, she dominated the music charts with her self-titled album and hits like “Baby” and “I Wanna Be Down.” By 18, she put on glass slippers and stepped into the leading role of Cinderella in a now-beloved televised version of the fairytale alongside Whitney Houston, Bernadette Peters, and Paolo Montalban. Six albums, three headlining tours, multiple acting roles, and a Broadway stint later, Brandy is once again returning to screens on ABC’s series Queens.

The musical drama, which premiered Oct. 19, centers on four members of the popular (and fictional) ’90s hip-hop girl group The Nasty B*tches. On the show, 40-somethings Naomi (played by Brandy), Brianna (Eve), Jill (Naturi Naughton), and Valeria (Nadine Velazquez) decide to get the band back together four days before their performance at the BET Awards. After such a long time spent apart, the group’s members each find themselves at various different stages in their lives as they navigate motherhood, friendships, and relationships.

When it comes to Brandy’s real-life relationship status, however, she’s publicly stated she’s not interested in a relationship and doesn’t want to get married. Speaking about it on The Real in 2016, the “Borderline” singer revealed she was “satisfied” being on her own. “I’ve never taken this much time on myself. I haven’t been on a date in like a year. I just like me right now,” she said. “I just feel like the way it feels being by myself and taking care of my daughter and just doing my thing. I’m all about my career right now.” When asked if she’d potentially be interested in getting married in the future, Brandy replied: “I know I don’t want to go down that road.”

In 2010, amid speculation that she was dating musician Flo Rida, Brandy published a blog post titled “I’m Scared To Give My Heart Away,” which focused on dating in the public eye. “I’ve been very cautious of who I date because I haven’t really dated in five years, so I’m very, very selective when it comes to that because I want to make sure that it’s real,” she wrote. “Dating is hard, period, whether it’s in the industry or not. But it’s just a little bit harder because everybody’s all in your business. Everybody wants to know what’s what and the pictures and the paparazzi, all that stuff is crazy.” She described her then-ideal man as “a nice guy” who has his “stuff together” and believes in family. “I don’t know where to find a good guy,” she added. “I just think that they’re around and I think you have to be good and at some point you’ll attract that. ... Just let love find you.”

As she awaits love to find her, and to mark her role on Queens, here is everything we know about Brandy’s dating history.

Brandy and recording producer Robert “Big Bert” Smith were first linked in 2001. In 2002, the couple revealed they had been quietly married the previous summer. “I’ve fallen in love with a very warm, gentle, understanding and focused person,” Brandy said in 2002 per People. “This summer we married quietly. A new experience, a new day for me — I couldn’t be happier!” It was later revealed in 2004 that the couple allegedly hadn’t actually gotten married at the time and instead pretended to be wed in the public eye.

In June 2002, the couple revealed they had a daughter together: Sy’rai Smith. Brandy’s pregnancy journey was chronicled in the reality television show Brandy: Special Delivery, which aired on MTV the same year. In June 2003, the couple announced they were separating, with a source telling People, “They will remain friends and raise their daughter jointly.”

Now 19 years old, Sy’rai has her own Instagram and is frequently featured on her mother’s page. Brandy recently posted a photo of her daughter with the caption, “My Everything is EVERYTHING.”

In July 2004, Brandy revealed she was engaged to basketball star Quentin Richardson. According to People, Richardson proposed to Brandy in front of their friends and family at the Century Club in Los Angeles with an 11-and-a-half carat diamond ring that was “valued at $1 million.” However, the couple ultimately ended up going their separate ways.

Brandy’s last known partner was music executive Ryan Press. The couple were first confirmed to be dating at a New Year’s Eve party in Las Vegas in 2011 and were engaged by December 2012. In 2013, she revealed she had no idea Press was planning to propose and called her then-fiancé’s decision “a spontaneous thing” that “he just felt” in his heart.

In August 2014, a representative for Brandy confirmed to People that she had “ended her engagement” with Press. According to the source, it was a “mutual decision” between the pair. “They’re both taking a step back regarding their relationship,” the source said. “They’re definitely friends and will continue to be friends.”

More like this
Michael B. Jordan Tackled His "Public Breakup" With Lori Harvey On 'SNL'
By Brad Witter
Who Is Pete Davidson Dating? He & Chase Sui Wonders Got Caught Kissing
By Jake Viswanath
Everything You Need To Know About Kanye's Post-Kardashian Dating Life
By Bustle Editors
John Corbett's Wife Bo Derek Once Revealed If She's Team Aidan Or Team Big
By Alyssa Lapid
Get Even More From Bustle — Sign Up For The Newsletter
From hair trends to relationship advice, our daily newsletter has everything you need to sound like a person who’s on TikTok, even if you aren’t.