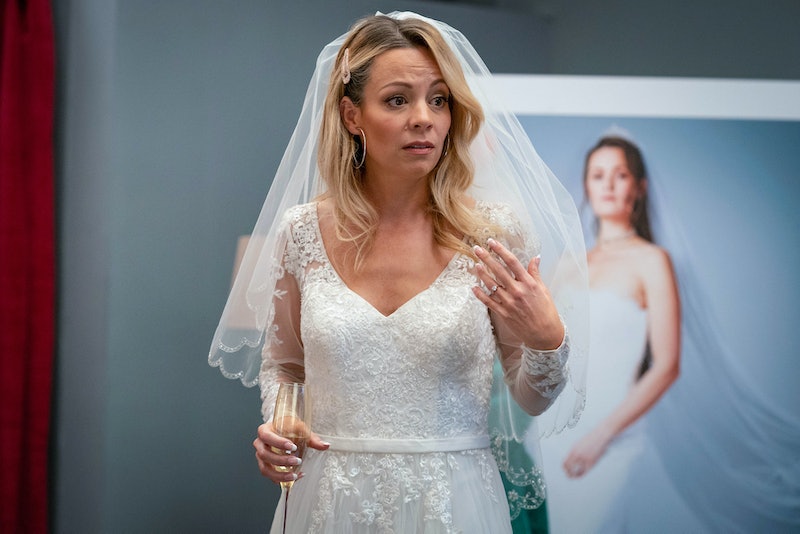 Comedian and TV panelist Sara Pascoe's turned her brain "into a theme-park" and invited everyone along for the ride with her new BBC Two sitcom Out of Her Mind. Showcasing the realities of being a 30-something, fresh out of a relationship, Pascoe's on-screen persona is trying to figure things out, only to be sent spiralling after her sister Lucy (played by Fiona Button) gets engaged. But who is Fiona Button?

Button is probably best known for playing Rose Defoe in BBC One's The Split, the legal drama about divorce and family, starring Nicola Walker, Annabel Scholey, and Deborah Findlay. You may also recognise her from her roles in Grantchester, You, Me and the Apocalypse, and Lip Service.

While Button is becoming increasingly known for her TV appearances, most of her career has actually been spent on stage. She has appeared in a number of bold theatre productions, including Madame de Sade in 2009, performing with likes of British legend Dame Judi Dench (whom Button says "loves a practical joke"), They Drink It In The Congo at the Almeida Theatre, and Ella Hickson’s marvellous revisionist, feminist take on Peter Pan, in which she took on the lead role of Wendy. More recently, she played Cecily Cardew in The Importance Of Being Earnest in 2018.

Now a mother of one – a daughter named Fordy, with writer husband Henry Fleet, whom she married in 2014 – Button grew up in Henley-On-Thames and was born in Switzerland. The 37-year old studied Drama at Birmingham University and attended the Webber Douglas Academy of Dramatic Art in London. Speaking to WhatsONStage, Button said the reason she wanted to become an actor was because: “I liked making people laugh when I was little, I would put on plays with my older sister for our parents. They were all pretty similar and involved me falling over a lot.”

Catch Fionna Button in Out Of Her Mind on October 20, 10pm on BBC TWO