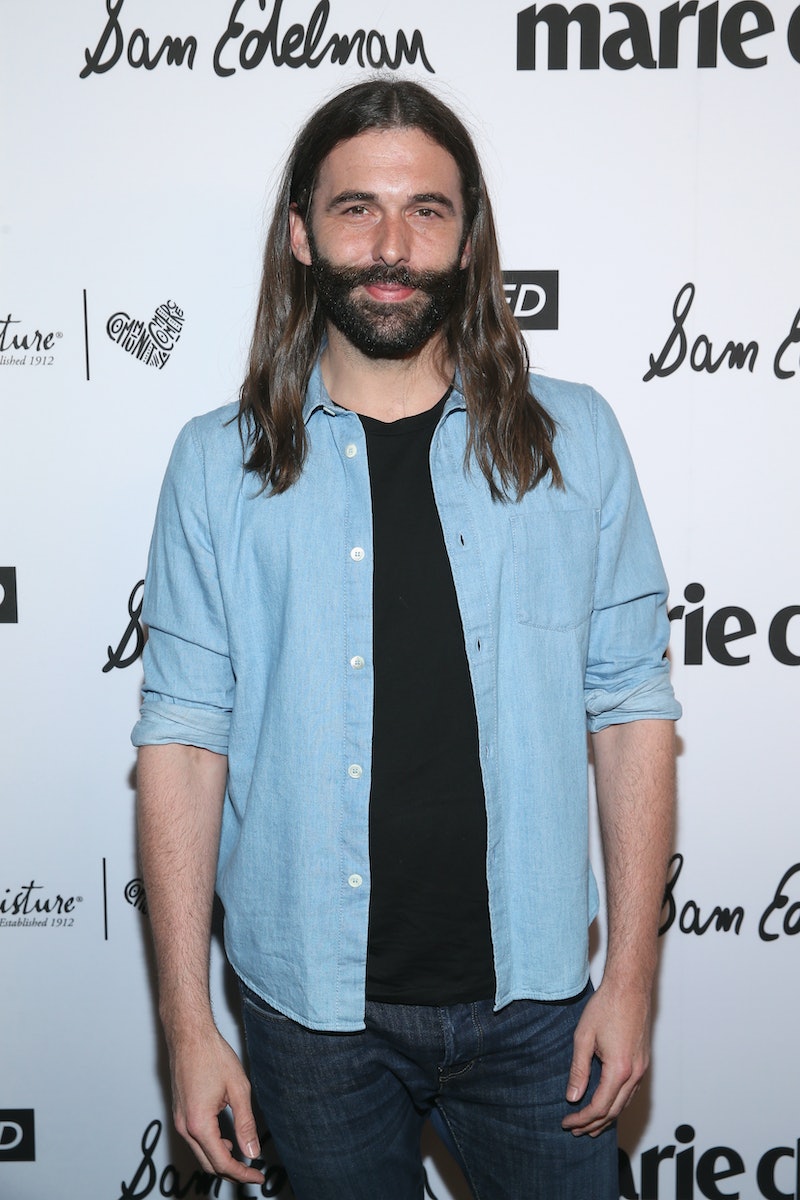 Just days after revealing his secret wedding, Jonathan Van Ness opened up about husband Mark Peacock on Instagram, sharing more about his low-profile relationship with the London native. The Queer Eye star had revealed on Dec. 31 that he had "married my best friend" during quarantine, but opted not to name or tag his love at the time. In his Jan. 2 post, JVN filled in some of the details of their courtship, including when they began dating, as well as thanked fans and followers for their many messages of support.

"We went on a date in London, which turned into more dates whilst I was on comedy tour," Van Ness — who identifies as nonbinary and uses he/she/they pronouns — wrote, referring to his Road to Beijing tour, which brought him to the U.K. in October 2019. "At the end of that time I was taking my mom, aunt & friends on a mini break to Amsterdam. I wanted [Mark] to come with but, was it a bit intense to ask Mark to come after a couple weeks worth’s of dates to come meet my mom & and friends on a mini break? Maybe so, but something about Mark felt different and I’m quite sure he felt the same."

Peacock ultimately did join Van Ness and his loved ones on that October 2019 trip, as both shared photos on their respective Instagram accounts from Amsterdam. They also made trips back and forth between London and New York, where Van Ness is based, and Peacock revealed in November 2019 that he had begun taking gymnastics lessons, a sweet nod to his amateur gymnast partner. The pair also rang in 2020 together in London (alongside Van Ness' friend and Bridgerton star Nicola Coughlan), and even adopted a dog in July, whom they have named Pablo.

Though they kept their relationship out of the spotlight for quite some time, Van Ness' Instagram post reveals that Peacock has been by his side for many big moments since 2019. Not only does the slideshow include a photo from Elton John's 2020 Oscars party in February, there are a few more snapshots from the pair's backyard wedding, and the coordinating cream suits the pair wore on the big day.

On his own Instagram account, Peacock shared the same wedding photo that Van Ness posted on Dec. 31, as well as some other candid pictures from the past year. "2020 brought on more changes than I’ve ever been a part of before," he wrote on Jan. 1. "I left London and moved across the Atlantic, got dressed up for numerous seriously hilarious zoom quizzes, re-discovered a love for gardening, learn to drive on the left, got married to my soulmate and one true love and adopted a little Jack Russell called Pablo and entered a family with 4 amazing cats."

While he acknowledged that "2020 brought so much pain and sorrow for folks," Peacock explained that he hoped that "some of the love I’ve found this year can make its way into the world in 2021." The happy couple both received messages of love and support in response to their social media posts, with Van Ness' friend and Queer Eye co-star Antoni Porowski writing, "Love you both," alongside plenty of heart emojis.

Van Ness' Dec. 31 IG post also reflected on the past year, including, of course, his relationship with Peacock. "2020 was a year unlike any other," JVN wrote. "I got married to my best friend & have a loving partner to continue building my life with."

Hopefully, the year ahead will bring even more happiness and joy for the newlyweds — and maybe some more social media posts about each other as well.

More like this
Is Nathan Fielder Dating Anyone? What 'The Rehearsal' Star Has Said About His Relationships
By Grace Wehniainen
Kim Kardashian & Pete Davidson’s Relationship Timeline From Start To Finish
By Jordyn Tilchen and Bustle Editors
All The Celebrity Relatives Revealed On 'Claim To Fame' So Far
By Brad Witter
Ashton Kutcher Opens Up About His Battle With Rare Autoimmune Disorder
By Radhika Menon
Get Even More From Bustle — Sign Up For The Newsletter