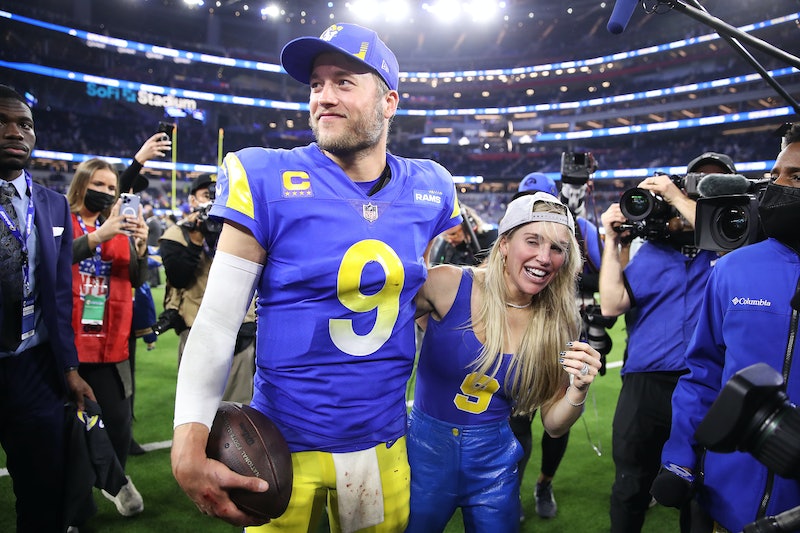 After 12 years with the Detroit Lions, Matthew Stafford was drafted by the Los Angeles Rams last year. On Sunday, Feb. 13, Stafford and his new team will head to the biggest event in the NFL season, where they’ll face the Cincinnati Bengals.

Matthew may be new to his Super Bowl-bound team, but he and his wife, Kelly Stafford (previously Hall), have been known in the football arena for years. Matthew, 34, has been breaking records as a pro-athlete and was once the highest-paid quarterback for Detroit with a $135 million five-year contract. Kelly, 32, has become somewhat of a media personality in her own right with a huge social media following. She’s also made headlines in the past for sharing her medical journey that required removing a brain tumor. And who could forget last November, when she threw a soft pretzel at a 49ers fan who was heckling her family during a Rams versus 49ers game. She has since apologized for the “pretzelgate” incident. Clearly, there’s a lot to learn about Kelly, so here’s everything you should know about her, her relationship, and four kids with Matthew.

Kelly Is An Influencer And Podcaster

With over 338,000 followers on Instagram, Kelly is a bonafide social media star with brand partnerships with labels including Mission Produce and leather goods line Hammitt.

Last September, Kelly took to the mic and started her own podcast called The Morning After with Kelly Stafford. In her no-holds-barred show, she shares anecdotes about her IVF journey, her mom’s first impression of Matthew, and the most famous person she’s ever met in LA (Kim Kardashian).

Before immersing herself in the media industry, Kelly got her nursing license in 2014 and worked as a registered nurse.

Kelly Has Four Kids And More Familial Ties To The NFL

Their love story is a sporting tale as old as time. Matthew was a quarterback, and Kelly was a cheerleader at the University of Georgia. Matthew attended the university from 2005 to 2008, and she was a year behind him. The two continued their romance even after Matthew graduated and was drafted to the Detroit Lions.

In 2015, the two got married. Their Atlanta wedding, which was featured on The Knot, even had an airbrush station where guests could personalize neon trucker hats (Matthew’s fashion signature).

A year later, Kelly posted a sweet wedding photo to celebrate their anniversary. She wrote, “It's been somewhat of a tough year when it comes to everything else besides this marriage. I might be kinda bias, but I think we are pretty good at it!”

Matthew doesn’t have Instagram, but that doesn’t stop Kelly from featuring her husband on her feeds and writing tributes to him. After the NFC Championship on Jan. 30, Kelly celebrated by posting a picture of Matthew and saying how proud his family is of him.

Kelly Had To Undergo Brain Surgery

In 2019, the Stafford family went through a medical nightmare. When Kelly experienced several dizzy spells that began in January of that year, she thought she had vertigo. But after getting an MRI scan, she was diagnosed with acoustic neuroma, a rare non-cancerous brain tumor. Though the tumor was benign, it had to be surgically removed since it could cause hearing loss and facial paralysis.

Before her surgery in April, Kelly shared that she was “completely terrified of brain surgery” and asked for prayers.

The surgery lasted 12 hours due to complications. In September 2019, Matthew and Kelly gave an interview to NBC Detroit affiliate WDIV. Speaking about how Matthew supported her throughout her recovery, she said, “He never left my side. I mean, when I say I couldn't do anything, he had to be by my side at every moment.” She added, “Every day, Matthew would come and help me out of bed, walk to the sink, brush my teeth.”

She still experiences symptoms from time to time. In December 2020, Kelly posted, “It’s been almost 20 months since my brain surgery. I don’t think I’ll ever be the same.” Still, she knows how far she’s come. Last April, Kelly posted a throwback photo from the hospital bed. She wrote, “Two years ago, waking up after a 12 hour surgery, [brain] tumor free. Today celebrating the clean 2 year scan and all the new adventures my family and I are going to have in this next year!”

More like this
The 2023 Super Bowl Commercials Feature A 'Breaking Bad' Reunion & Missy Elliott
By Alyssa Lapid
RHOP’s Robyn Dixon Explained Why Juan Paid For Another Woman's Hotel Room
By Brad Witter
Michael B. Jordan Tackled His "Public Breakup" With Lori Harvey On 'SNL'
By Brad Witter
Who Is Pete Davidson Dating? He & Chase Sui Wonders Got Caught Kissing
By Jake Viswanath
Get Even More From Bustle — Sign Up For The Newsletter
From hair trends to relationship advice, our daily newsletter has everything you need to sound like a person who’s on TikTok, even if you aren’t.