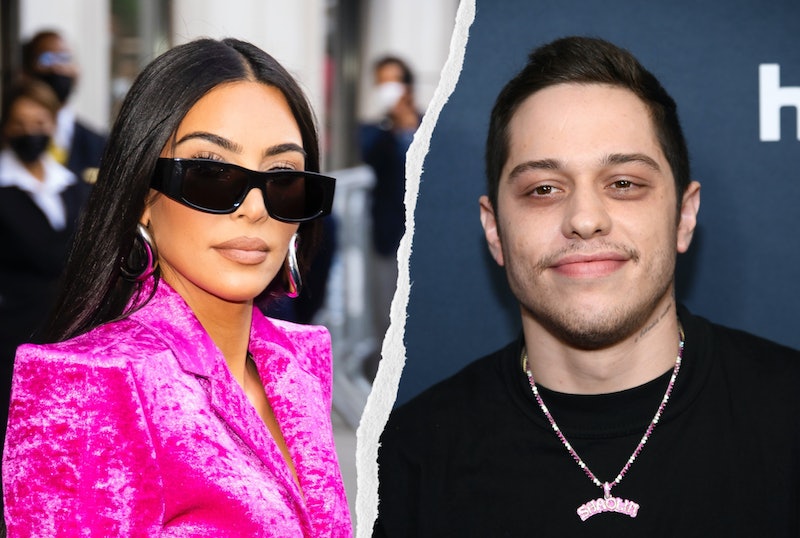 After months of speculation, Pete Davidson seemingly confirmed his relationship with Kim Kardashian. During an interview with People, Davidson was asked about his life in the spotlight. He responded that he doesn’t have social media and mostly focuses on work. "Or, if I'm off, I just either hang with my friends or chill with my girlfriend inside. So I don't do much," he said, referring to Kardashian.

Rumors that Kardashian, 41, and Davison, 28, are dating have been swirling since October 2021, when the two shared a kiss during a Saturday Night Live sketch in which they portrayed Aladdin and Jasmine. Shortly afterward, they were photographed holding hands on a roller coaster ride at an amusement park in Southern California. They’ve since been spotted out together on numerous occasions, including celebrating Davidson's birthday in November, enjoying a movie date in Davidson's hometown of Staten Island, New York in December, and vacationing in the Bahamas in January 2022.

They’ve even earned the support of Davidson’s SNL co-stars. “I mean, you’ve got to be happy for love, I guess,” Keenan Thompson told People in November. “They look like they’re having a good time. ... I’m always happy when he’s happy.” Added fellow SNL cast member Chris Redd: “Pete and Kim? Damn, Pete. Damn! They’re wearing matching outfits so I think they’re on their way.”

Kardashian is currently in the midst of a divorce from her estranged husband Kanye West. She filed for divorce in February 2021, and requested to be declared legally single in December 2021 after West made multiple comments about her relationship with Davidson and his intention to win her back. West, however, has also seemingly moved on and is currently dating Uncut Gems star Julia Fox.

More like this
Did Pete Davidson Remove His Kim Kardashian Tattoos? Photos Point To Yes
By Alyssa Lapid
Kim Kardashian Gives “Bucket List Dream” Lecture At Harvard
By Alyssa Lapid
North West Will Make Her Acting Debut Alongside Mom Kim Kardashian
By Radhika Menon
Kim Kardashian & Kylie Jenner Squabble Over Skims On Instagram
By Alyssa Lapid
Get Even More From Bustle — Sign Up For The Newsletter
From hair trends to relationship advice, our daily newsletter has everything you need to sound like a person who’s on TikTok, even if you aren’t.