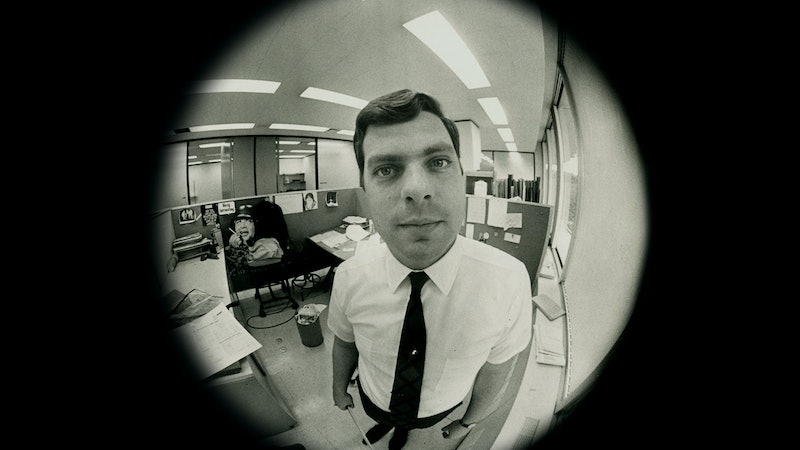 Netflix docuseries The Sons of Sam: A Descent Into Darkness introduces viewers to Maury Terry, an investigative journalist who was convinced that convicted “Son of Sam” killer David Berkowitz didn’t act alone in murdering six people. His theory centered around a satanic cult and a supposed network of conspiracy that stretched across the country. Throughout his career, Terry repeatedly petitioned to have the case reopened, and for the police to investigate the people Berkowitz might have worked with. Berkowitz, who left letters at the crime scenes and insisted he was doing the work of a centuries-old demon that communicated via his neighbor’s dog, confessed to the murders but later seemed to confirm that a larger conspiracy was at work.

Terry’s files are the basis of The Sons of Sam. Director Josh Zeman connected with Terry before his death in 2015, and the series is as much about Terry as it is about the case. Here’s what you need to know about Maury Terry, the journalist who devoted his life to probing the Son of Sam killings.

Who Was Maury Terry?

A graduate of Iona College, Terry worked for IBM until he learned about Berkowitz’s arrest. Finding it strange that his mug shot didn’t match some eyewitness descriptions of the killer, (and that Berkowitz didn’t own a Volkswagen, the car seen by some witnesses), Terry became convinced that there was more than one killer — and set out to prove it. He began circulating his theories in the press in the late 1970s, but the police dismissed the claims immediately. Terry continued to pursue the theory; and in 1981, Berkowitz wrote to him seemingly confirming it, but added, “Maury, the public will never, ever truly believe you, no matter how well your evidence is presented.” Terry even interviewed Berkowitz on television to verify the story.

However, Berkowitz’s recollections about the killings have changed over the years; he’s even said that his story about the dog’s demonic possession was a hoax. Some investigators believe that his later confessions were a result of Terry’s leading questions, or Berkowitz being untruthful. The predominant conclusion is that he carried out the murders by himself. According to The Sons of Sam series, Terry’s increasingly obsessive work led to stress, health troubles, and a divorce, and may have contributed to his death at age 69.

What Was Maury Terry’s Theory About The Son Of Sam Killings?

Terry believed that a satanic cult known as “The Children” was ultimately responsible for the murders, and that Berkowitz was simply a single player in a much larger conspiracy. Berkowitz told Terry that he was recruited in a park in Yonkers, and that, apparently, “They were working with Satan to try to bring in a lot of chaos.” He claimed the killings were a part of that work. James Rothstein, who worked in a vice unit in New York, said he did find leads about cult activity in Untermyer Park, including pedophilia, animal sacrifice, and satanic signs and rituals.

Terry believed that John Carr — who lived near Berkowitz and whose father, Sam, owned the dog that Berkowitz said gave him orders — played a larger role in the killings. His nickname was “John Wheaties,” which Terry believed corresponded with a Wheaties reference in one of the letters found by police. In his interview with Terry, Berkowitz named John as a shooter on one of the killings and John’s brother Michael as another perpetrator. Both men died in the years following Berkowitz’s arrest: Michael in a car accident, and John in a suspected homicide. Berkowitz, who’s still serving several life sentences, hasn’t elaborated further on this alleged conspiracy or his role in it. There are, however, investigators who do believe that Terry’s work offers evidence to support part of the story — that Berkowitz might not have acted alone. In 1996, the Yonkers Police Department reopened the case, but subsequently closed it again.

What Did Terry Talk About In His Book?

In The Ultimate Evil: The Search for the Sons of Sam (originally published in 1987), Terry devotes 500 pages to various potential clues that ultimately led him to suspect that Berkowitz, the Carrs, and various other supposed cult members who he believed conspired to commit the Son of Sam murders (as well as other potentially interrelated killings across the U.S.). He also connects The Children to another known cult, The Process Church of the Final Judgment, which was thought to be linked to the Charles Manson killings (although there’s no verified proof of that). The result is Terry’s theory that the Son of Sam killings had a deeper societal goal — widespread chaos — and were at the center of a vast conspiracy. One of the shooting survivors, Carl Denaro, who cowrote a new book ‘The Son of Sam’ and Me: The Truth About Why I Wasn’t Shot By David Berkowitz, was good friends with Terry and intends to extend the research. He is also interviewed in the docuseries.

The Sons of Sam: A Descent Into Darkness is now streaming on Netflix.

More like this
The Mysterious Gunther Corporation From 'Gunther’s Millions' Has Dissolved
By Brad Witter
Rachel Nickell’s Son Wants The Police To Take Accountability Over Errors
By El Hunt
Here’s Everything Coming To & Leaving Netflix In February
By Jake Viswanath
Yes, Maurizio Mian's Cult In 'Gunther’s Millions' Was About Eugenics
By Gretchen Smail
Get Even More From Bustle — Sign Up For The Newsletter
From hair trends to relationship advice, our daily newsletter has everything you need to sound like a person who’s on TikTok, even if you aren’t.