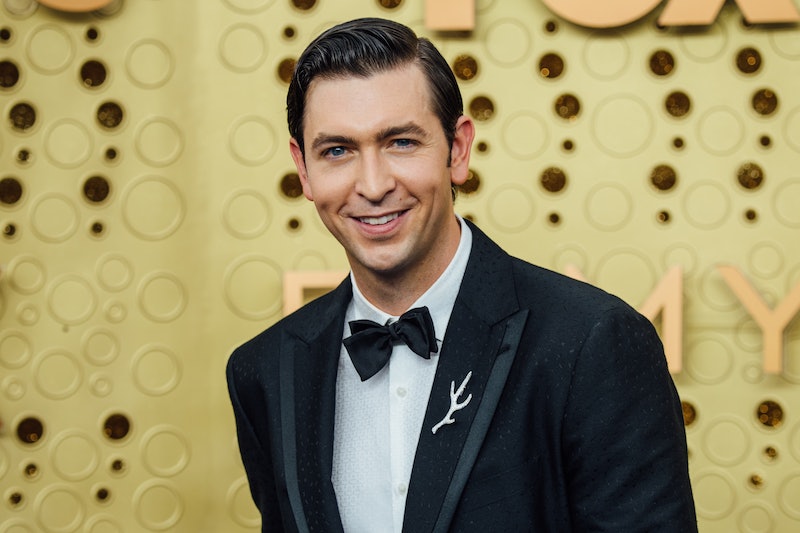 He's nominated for an Emmy for his scene-stealing performance as Cousin Greg on HBO's Succession, but Nicholas Braun's dating life isn't as busy as one might think. Like many, Braun just doesn't feel comfortable dating during an ongoing pandemic, but that doesn't mean hasn't tried. And after the 32-year-old went on one date with a woman — who slid into his Instagram DMs, in case you were wondering — he quickly realized that it's just too "dicey" right now to try and have a relationship.

Braun apparently went on a socially-distanced first date over the summer — they took a walk outside and wore bandanas as face coverings, he told Esquire. "We met up, and I didn't even see her face until right at the end of the day, we were like, 'Hey, by the way, here's what it looks like,'" he dished. But, alas, even though they got to see each other's faces, the experience was an uneasy one. Speaking with Bustle about dating during these uncertain times, Braun called it "the trickiest part of quarantine."

"It's interesting going on dates with bandanas on, with masks on, and [realizing] all the normal stuff where you might sit close to each other at a restaurant, you might put your arm around them or something, that all of that is gone until date three, four, until you feel like OK, I can get close to this person, and they can get close to me," he explained. "There’s a new fear of human contact, so it just changes it, which I think is really interesting. It sort of forces you to get to know somebody better before you go in for a hug... or something more." He also told Bustle that now that he's back living in New York City, where Succession films, he's steered clear from dating. "It's just a little dicey here," Braun admitted.

Even though he doesn't appear to be in a relationship currently, Braun wrote an entire song about dating during a pandemic, the appropriately titled "Antibodies (Do You Have The)." He released both the song and a music video that was shot on his iPhone at the end of July.

As much as dating makes him uncomfortable, Braun recognized while chatting with Esquire that "people miss each other." He explained, "I don't know if people miss bad dates, but they miss the good ones, and I think people are craving that. They're always craving that. It's just a human need, to try and meet new people."

More like this
Joey Essex Is Rumoured To Be Dating A 'Love Island' Favourite
By Sam Ramsden
Gemma Atkinson & Gorka Márquez Are Strictly The Sweetest Couple
By El Hunt
Vanessa Bauer Is Reportedly Dating Her 'Dancing On Ice' Partner
By Darshita Goyal
4 Surprising Celeb Throuples That Got The Internet Talking
By Sophie McEvoy
Get Even More From Bustle — Sign Up For The Newsletter
From hair trends to relationship advice, our daily newsletter has everything you need to sound like a person who’s on TikTok, even if you aren’t.