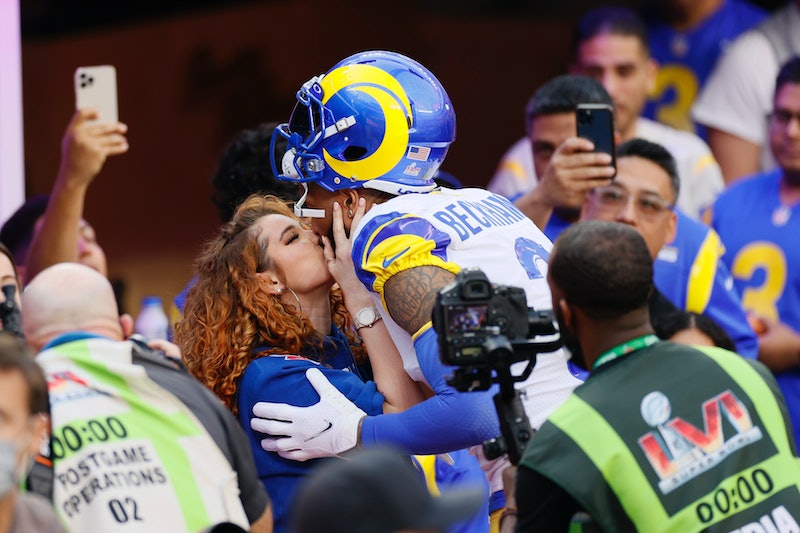 Odell Beckham Jr. is one of the most important players of Super Bowl LVI, but he’s about to take on another significant role very soon: father. The Los Angeles Rams player has been dating fitness trainer Lauren Wood for more than two years, and the couple are preparing to welcome their first child, who is expected to arrive any minute. Beckham Jr. even told reporters on Feb. 12 that he’s “on standby” in case Wood goes into labor while he’s on the field on Super Bowl Sunday.

Wood revealed that she was pregnant with their first child in November 2021 by posting an Instagram slideshow of Beckham Jr. caressing her baby bump. “ilyilyily,” she captioned the post, which the footballer commented on by writing, “Can’t wait baby!” Despite his excitement, he told reporters that he didn’t even want to consider the possibility of Wood giving birth during the game. “I don’t need you to put that energy in the air about the Saturday night or the Sunday thing,’’ he said. “I think God has a different plan. I don’t need it during the Super Bowl. I want to see my child being born, so I’m on watch.”

The couple went public with their relationship in November 2019 on Instagram, posting some PDA snapshots on Beckham Jr.’s 27th birthday. While the two are pretty quiet about their romance, Beckham Jr. did open up about their relationship while paying tribute to Wood on her birthday in March 2020. “It’s all about the person u can be ya self wit, I find that this world takes itself a little to [sic] serious,” he captioned his post. “Life is full or moments, happy or sad but…what u choose to fill them wit… is on u, I thank u for bein u…YUMI…happy born day.”

Prior to Wood, Beckham Jr. had been linked to a number of celebrities, including Zendaya, Khloé Kardashian, and Amber Rose. However, Rose denied that they were ever an item, calling him “one of my best friends in the entire world” in April 2017. “We are very very close, very tight, we talk a lot,” she said. Zendaya’s own father, Kazembe Coleman, also shut down rumors they were a couple. “There’s no relationship, we’re just friends,” he told TMZ, before poking fun at all the dating rumors about his daughter. “When you see my daughter out on a date without me, it’s a relationship.”

And as for Kardashian, Beckham Jr. told GQ that the encounter that sparked dating rumors between them was simply a friendly conversation at Drake’s house, where he lived for a brief time. “We were in the kitchen of the house, where there was only 15 people,” he said in 2016. “It’s just kind of like … ‘dating?’ I just met this person. This is maybe the second conversation we’ve had.”