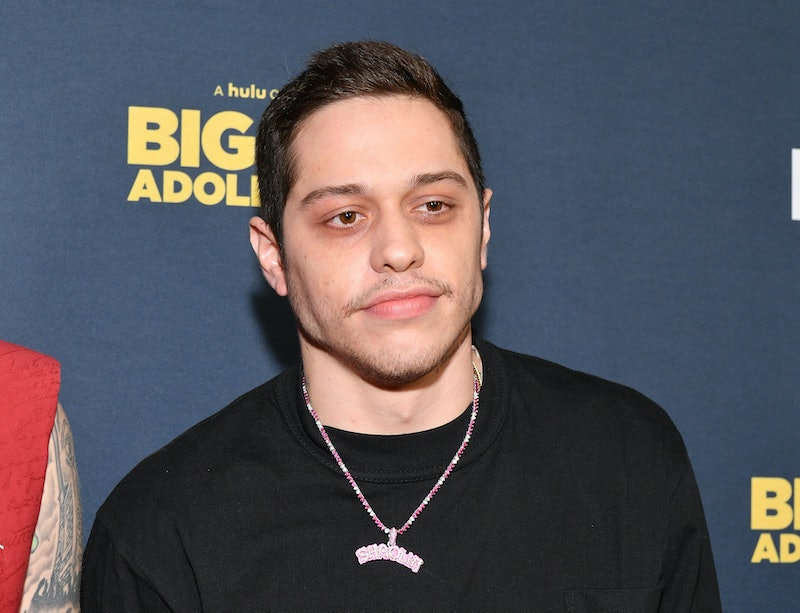 Pete Davidson's dating life has cast a long shadow over his own career. The 26-year-old comedian, who has been a cast member at Saturday Night Live since 2014, often makes more headlines for his relationships than his jokes. But it's hard to ignore his personal life, especially when he's still getting name dropped in his ex's music videos long after their breakup. So is Pete Davidson dating anyone? After a few rapid-fire romances, it seems Davidson might be taking a break from love.

Back in December 2019, Davidson commented on his love life to SNL's Weekend Update co-host Colin Jost. "It's not fair, Colin. You get to date a famous woman, and everyone's delighted," said Davidson, referring to Jost's engagement to Hollywood star Scarlett Johansson. "But when I do it, the world wants to punch me in the throat. What'd I do?"

Davidson's dated numerous high profile celebrities with enormous fanbases, including Kate Beckinsale and most infamously Ariana Grande, who he was briefly engaged to. More recently Davidson's had whirlwind romances with supermodel scions, including a two month fling from August to October 2019 with Andie MacDowell's daughter Margaret Qualley, followed by a three month relationship ending in January 2020 with Cindy Crawford's daughter Kaia Gerber. He's been a near constant feature on celebrity gossip sites the last three years and even proliferated the term "big dick energy" across the internet, all while remaining a high-profile member of SNL.

These days, Davidson seems to be keeping it more low key. Since his breakup with Gerber, Davidson hasn't been attached to anyone else. It makes sense, given that Davidson told Charlamagne Tha God his split from Gerber was rooted in wanting to work on his mental health. "She’s very young, and I’m f–king going through a lot and it was before I went to rehab," Davidson said during the interview.

But just because Davidson's been staying single doesn't mean his relationships have stayed out of the news. Last week, Grande released the song "Positions." And fans are convinced that Grande used her lyrics as an opportunity to throw shade at the comedian. Singing, "Heaven sent you to me, I'm just hoping I don't repeat history," the artist breaks down the word "repeat" into individual syllables, separating the "re" from "peat." Which sounds an awful lot like, "Pete." So far Davidson hasn't commented on her word play, but who knows what he has up his sleeve for SNL next week.

More like this
Tanya Burr Is Expecting A Baby With Her Mystery Partner
By Maxine Harrison
Who Is 'Umbrella Academy' Star Elliot Page Dating After His Divorce?
By Jake Viswanath
Khloé Kardashian Set The Record Straight On A New Dating Rumor
By Grace Wehniainen
Britney Spears Shared More BTS Photos & Video From Her “Fairytale” Wedding
By Brad Witter
Get Even More From Bustle — Sign Up For The Newsletter