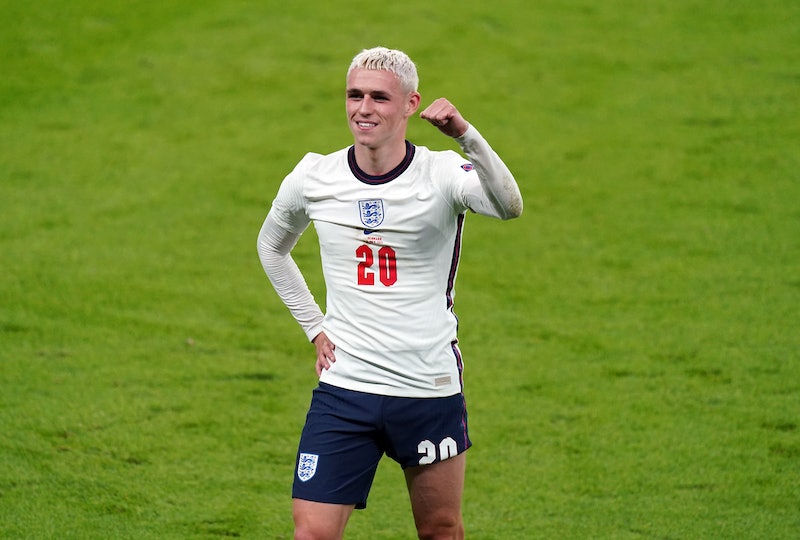 When the England team reached the Euro 2020 final, the focus on the team was in full force. Among those likely to catch viewer’s eyes was (and remains) Manchester City player Phil Foden. Beyond his excellent midfield skills, the 21-year-old has also been sporting a fetching peroxide blonde do at the Euros, which his teammates were rumoured to copy, had they won the final, he said. But what of Foden’s dating life? Who supporting him during what was potentially one of the biggest moments of his professional career?

Foden has quite the love story, in fact. The footballer is in a long term relationship with his childhood sweetheart, Rebecca Cooke. (Much like Harry Kane and his wife, and Kalvin Phillips and his girlfriend.) Though we don’t know exactly when Cooke and Foden started dating, we do know that they both grew up in Stockport, Manchester, and went to the same school. Per the Sun, the young couple have one son, Ronnie, born in January 2019, and welcomed their daughter, in late July.

Foden’s partner has largely remained out of the spotlight – her Instagram account is set to private – and Foden has also limited how much he shares about his relationship and family on social media. His last Instagram post featuring Cooke and Ronnie was back in November 2020, with the young family posing in front of a mural of the Man City star in Manchester. He captioned the post: “Nice drive through northern quarter and saw this! 🤩 Amazing to show my son. Thank you @easportsfifa#FIFA21!”

Speaking about the birth of his son, Foden revealed in an interview for Manchester City’s official website: “I was there for the birth. I walked out of the room, gave it a little tear and then went back in like nothing happened. I’m not one for crying in front of people. I like to be on my own, but I was there in the room, watched it happen and it was a special moment. Your life changes.” All eyes on Foden come Sunday night.