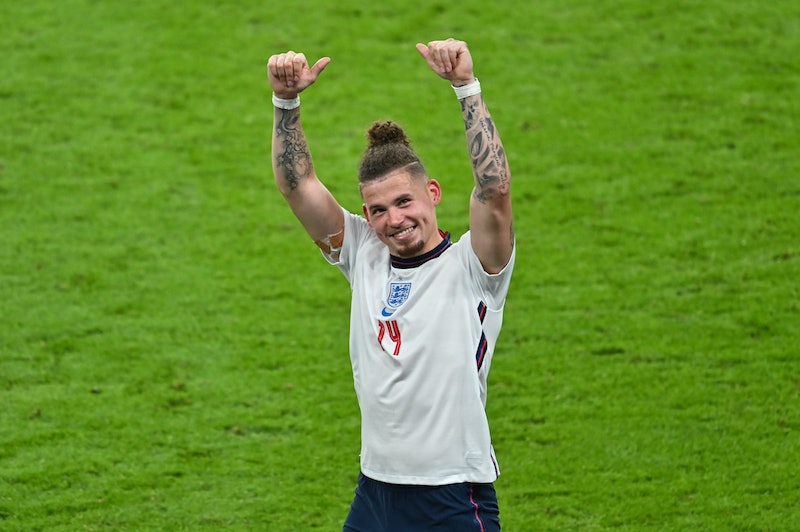 With England through to the Euro 2020 finals against Italy, all eyes are on the talented squad of men who (fingers crossed) will be bringing it home on Sunday, July 11. Midfielder Kalvin Phillips is an important member of the England team, and is a talented footballer who’s also signed to Leeds United. But what about his personal life; does he have a partner? And if so, who are they?

In short, Phillips does indeed have a girlfriend, and their story is incredibly sweet. The Midfielder has been with partner Ashleigh Behan for some time now, although reports are mixed on how long exactly. The two are childhood sweethearts, that’s for sure, but while some publications report they have been dating for eight years now (they’re both 25, making them 17 when they started dating), others such as The Daily Mail say they actually met when they were just 11.

Interestingly, Phillips is not the only England squad member who is happily partnered up with their childhood sweetheart. Team Captain Harry Kane, as well as Jack Grealish and Raheem Sterling are all in relationships with the women they met as teens.

However long they’ve been together, Phillips and Behan seem super close and often share snaps of each other on Instagram. Phillips most recently wished Behan a happy birthday on social media, with pictures of her accompanied by the cute message: “Happy Birthday to the realest and most beautiful woman in the world. You deserve everything.”

Behan has also posted pictures at Wembley Stadium, where she’s been supporting her boyfriend throughout the Euros. One recent snap showed her wearing a ‘Phillips’ football shirt, which she shared alongside the caption: “I’m a fan.”

Both Phillips and Behan hail from Leeds, and according to sports site Oh My Football, Behan is a makeup artist who has her own beauty salon in Leeds. She has over 17 thousand followers on Instagram, and counting.

Phillips is fairly private when it comes to his relationship, but he did reveal in one interview with ITV that Ashleigh is one of his “all-time fans.” Cute!