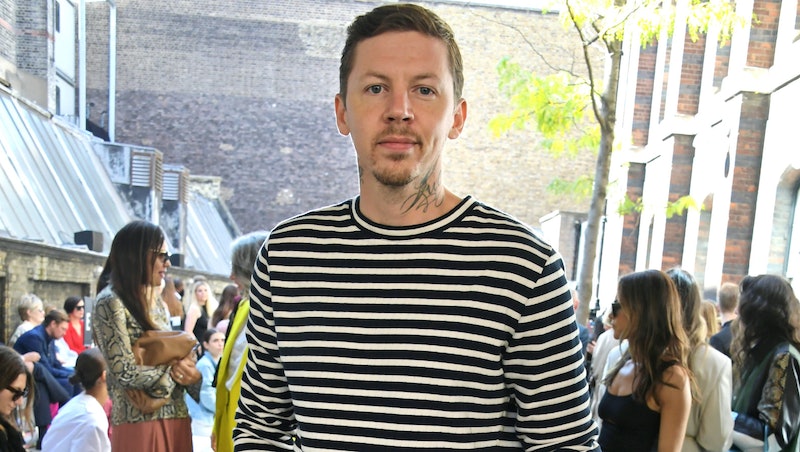 Congratulations are in order for Professor Green who has revealed that he is to become a first-time father. The British rapper announced the news on Instagram last week after keeping the pregnancy a secret throughout 2020. With the cat out of the bag, many have wondered who is Professor Green dating?

Taking to Instagram, Professor Green — real name Stephen Manderson — shared a snap with pregnant girlfriend Karima McAdams, an actor and fashion model. According to IMDB, McAdams' acting credits also include Vikings and TV series Deep State. The pair have been dating since 2019, and met through friends, reports The Sun.

In the intimate photo, McAdams is seen sat on the bathroom floor holding her baby bump, while Professor Green looks on from the bath. Green shared a gushing post praising the mother-to-be as well as the difficulties in keeping the happy news a secret.

"It’s finally gotten to the point where it’s impossible to hide," he wrote in the post, joking that Karima wanted him to "wear prosthetics" to continue "sneaking into appointments."

In the lengthy caption, Green also spoke of his "excitement, admiration and curiosity" about his pending fatherhood.

"I’m excited about meeting you. Holding you. Teaching you. Learning from you," he continued.

"Never have I admired anyone as much as I have your mamma. She’s nothing short of remarkable, remarkable in fact is an understatement. To see the body change in such a way is fascinating, incredible, unbelievable, amazing, ASTOUNDING. Weird. Ridley Scott had to get his inspiration from somewhere..."

The rapper also wished his fans a joyous and healthy 2021.

Karima McAdams also shared the happy news to her own Instagram page, describing her longing to meet their "little babe."

"So my mate and I are procreating," she wrote.

She added: "We weren’t gonna say anything but trying to get him past hospital security, scans, and various other appts masked and cloaked has failed on occasion also 2020 has been a trip/non trip of sorts and the only thing that has spurred me/us on is the longing to meet our little babe (also if I hear another friend tell me to lay off the deliveroo I might get violent)."

The mother-to-be also described her pregnancy as a "tumultuous" process but also marvelled at her transforming body.

"Women you are remarkable, some of you have done this multiple times, I’m on my knees giving you praise," she wrote.

The happy couple celebrated their one-year anniversary in April last year and have shared some funny moments from their relationship during lockdown on social media.

Celebrity friends have flocked to Instagram to wish the couple well including broadcaster Stacey Dooley who wrote: "Omg YES...Delighted for you and of course, my crush (supermoddy/mum!)"