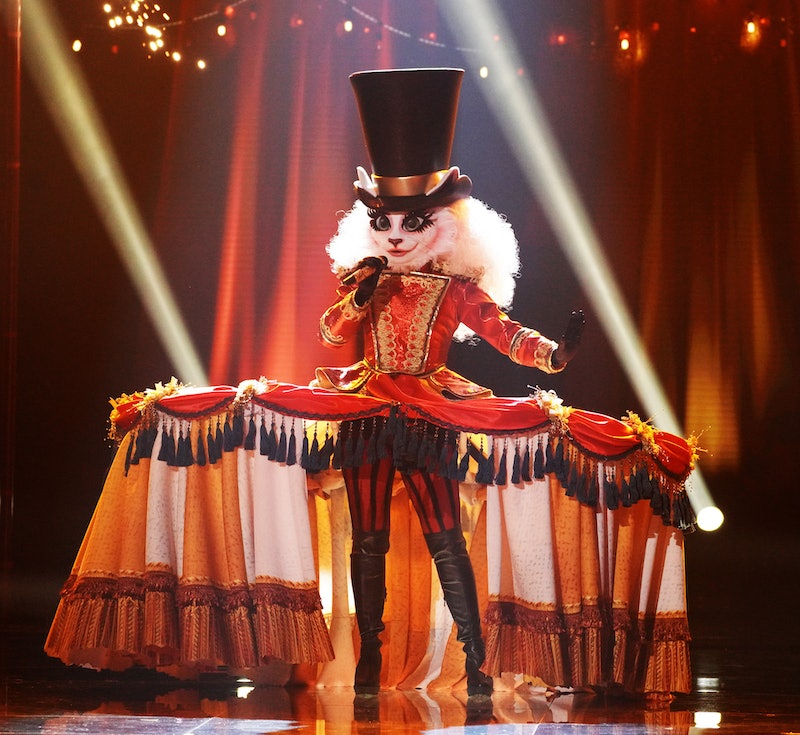 After crowning Firefly the winner of Round 1, The Masked Singer has moved on to Round 2 of Season 7 with a handful of new contestants. The singer who seems most poised to give Firefly a run for her money is Team Good’s Ringmaster, a cat decked out in a circus tent and top hat. She performed a powerful rendition of Miley Cyrus’ “The Climb,” leading the judges to guess that the person is a professional singer like Olivia Rodrigo, Kacey Musgraves, or Noah Cyrus. (Ken Jeong also guessed Kelly Clarkson, but everyone hated that theory.)

Based on her first clue package, it does seem like Ringmaster is somebody who’s been in the music industry for a while. The clip opened with a mug with Miley Cyrus’ picture on it and a golden state image of Montana. There was a tic-tac-toe box, and a bottle of “sweet southern” alcohol. There was also a Class C driver’s license for “Golden State.” After her performance, Ringmaster told Nicole Scherzinger that it was “good to see [her] again.”

Scherzinger guessed Rodrigo because like Cyrus, she’s starred in a Disney TV show and sung the hit song “Drivers License.” Robin Thicke guessed Musgraves because she’s a Southern country singer who’s from Golden, Texas, and she also has an album titled Golden Hour. But on YouTube, some viewers have theorized that Ringmaster is American Idol alum Gabby Barrett, based solely on a preview clip that demonstrated Ringmaster’s tone of voice.

Barrett finished third on the 16th season of American Idol. She certainly sounds a lot like Ringmaster, and she sang “The Climb” while competing on the series. She was also featured as Radio Disney’s “Next Big Thing.” Though Barrett was born Pennsylvania — making it hard to line up the “Golden State” clue — her 2020 debut album was called Goldmine.

Another possibility is Emily Osment, who starred alongside Miley Cyrus on Hannah Montana as Lilly. Osment is both an actor and singer who performed duets with Cyrus on the show and has released her own albums. She was born in Los Angeles — in the “Golden State” of California — and tperforms mostly rock songs, but it’s not out of the question that she could belt out her longtime friend’s pop hit. We’ll have to wait for more clues to see if any of these guesses are correct, but for now it’s clear that Ringmaster is going to be a tough contender to beat.

More like this
What’s New On Netflix: Lana Condor’s Ghostly Comedy & A Sexy Reality Series
By Arya Roshanian
Yes, You Can Really Charter Below Deck Med’s New Superyacht, Home
By Brad Witter
Chrishell Stause & G Flip Have “No Rules Or Regulations” In Their Relationship
By Brad Witter
Joey Essex's Net Worth Is Not What You Expect
By Sam Ramsden
Get Even More From Bustle — Sign Up For The Newsletter