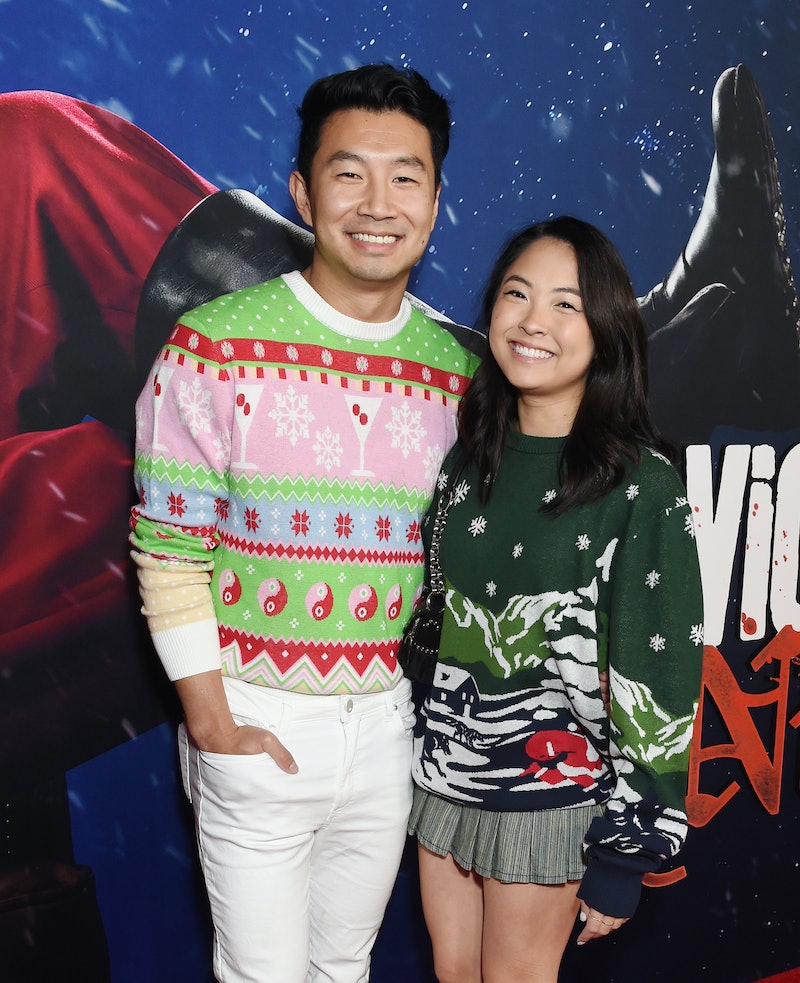 A lot has changed for Simu Liu since he starred in the MCU’s Shang Chi and the Legend of the Ten Rings — including his relationship status. Now he’s recognized around the world, and his love life is attracting more attention. When the Kim’s Convenience alum shows up at, say, a red carpet event with a woman — and then posts one of the photos to his Instagram — people take note. And given that he did, in fact, recently do just that, Liu is rumored to have a new girlfriend. (Bustle has reached out to Liu’s representative for comment, but did not receive an immediate response.)

The actor had a high-profile movie night with Allison Hsu — a digital marketing manager who works at Interscope Records, per People — on Nov. 29. The two attended the Los Angeles premiere of the Christmas action-comedy Violent Night at TCL Chinese Theatre, so they showed up in holiday sweaters. Liu’s featured cocktail glasses, snowflakes, and yin-yang symbols, while Hsu’s was decorated with more snowflakes but also appeared to show Santa Claus running from wolves. (So jolly, right?) The two posed for photographers, and Liu posted one of the images to his Instagram on Dec. 2, captioning it, “pictured: two asians in front of santa’s crotch.”

Their first post together on Liu’s grid quickly sparked conversation in the comments. Jubilee Media CEO Jason Y. Lee wrote, “HARD launch alert,” while another follower began working on couple names. “Allimu. Silli. Need to workshop these,” they wrote. Others complimented their festive sweaters and called them cute, including Oliva Munn, who went with an extended “Cuuuuuute.”

It was actually on Hsu’s Instagram where they made their true Instagram debut, though. Two weeks before, on Nov. 20, she posted a photo of them snuggled up at a Blackpink concert in LA. Pop Crave had already caught them and tweeted out photos of their date the night before, which apparently inspired Liu’s comment on Hsu’s post: “Omg can’t believe I got a photo with the girl from PopCrave.”

It’s unclear how long the two have been seeing each other, but Liu revealed that he was “going through a breakup” on Sept. 22, during the tech conference Dreamforce, according to SFGate. He noted that it probably contributed to how he’d been feeling— “burnt out” and not quite “where [he] needed to be with [himself].” Over the summer, through mid-August, he’d been seen out and about with actor Jade Bender, per Us Weekly. The two did not, however, publicly comment on their relationship.

Earlier in 2022, there was also speculation about a potential romance between Liu and Selling Sunset’s Chrishell Stause. She helped him find a house during Season 4 of the Netflix reality show, but she told a fan on Watch What Happens Live with Andy Cohen in February that he is “just a friend,” with no benefits. “He’s so lovely, he’s amazing … I don’t think he’s public with his whole [dating] situation,” she added.

With a Shang-Chi sequel and the Barbie movie on the way, it probably won’t get any easier for Liu to keep his dating life private.

More like this
Who Is Allison Williams Dating After Her Divorce? She’s Engaged With A Child
By Jake Viswanath
Selena Gomez Confirms She's Single Amid Drew Taggart Dating Rumors
By Martha Sorren, Jake Viswanath and Jack Irvin
John Corbett's Wife Bo Derek Once Revealed If She's Team Aidan Or Team Big
By Alyssa Lapid
Jennifer Lopez Calls Moving In With Ben Affleck's Family An “Emotional Transition”
By Alyssa Lapid
Get Even More From Bustle — Sign Up For The Newsletter
From hair trends to relationship advice, our daily newsletter has everything you need to sound like a person who’s on TikTok, even if you aren’t.