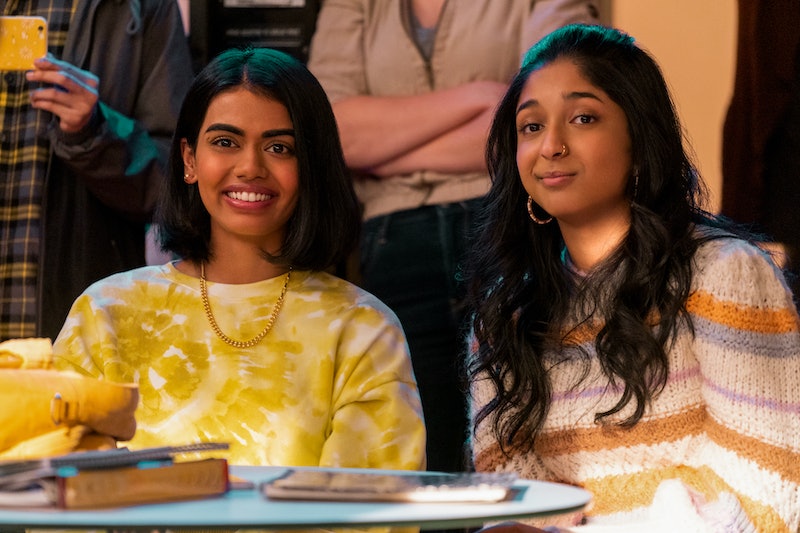 In Never Have I Ever Season 2, Devi meets her match: Aneesa, a new Indian American student who transfers into her class. As the only other South Asian girl at Sherman Oaks, Devi immediately sees Aneesa as her competition. The character appears to be everything that Devi isn’t: laid-back, charismatic, and able to fit in with the popular kids in the way that Devi has always desperately wanted to. Aneesa also draws the attention of Ben, who Devi realized she was falling for at the end of Season 1. But as the season goes on, Devi learns that there’s a lot more depth to Aneesa than she initially realized.

Aneesa is played by Megan Suri, who started acting at a young age. “Was cleaning my closet out and came across this gem. Time flies... I was 8 years old when I booked my first role which happened to be in a commercial for Honda,” Suri wrote in a 2015 Instagram post. “Fast forward to now, and I still get THAT excited for any role I've been blessed enough to book.”

Suri has since appeared in episodes of Bones, Modern Family, and How to Get Away with Murder. She stars as Veena in the upcoming movie Searching 2, which isn’t a direct sequel to the original film but was shot with the same computer screen style. She’s also the lead actor in The MisEducation of Bindu, an indie film about a bullied Indian girl. “Playing Bindu was just a whirlwind,” Suri told Extra Butter in 2019. “I just relate to her on so many levels but I truly found a different sense of love through her for myself ... being quirky and awkward isn’t always a bad thing. It’s awesome, and it makes us who we are.”

Recently, Suri worked on an indie film with her friends titled Dramarama, which follows “five drama nerds [who] throw their final murder mystery party before heading off to college.” But she may be most familiar to fans of ABC’s Fresh Off the Boat. She played Simryn Patel, the daughter of Mina Patel, in an episode that was meant to be a backdoor pilot for a spinoff show centered on an Indian American family. (In one memorable scene, she hilariously danced to Mandy Moore’s “Candy.”)

Titled Magic Motor Inn and written by Rachna Fruchbom, the series was meant to follow Simryn as she attended school with Eddie Huang while her parents ran a motor lodge hotel in East Orlando. However, the show never materialized. “The Fresh off the Boat spinoff that was developed this season did not ultimately come together. I think, in a way that the teams wanted to, so it is not at the moment moving forward,” ABC Entertainment president Karey Burke told Deadline in 2020.

However, there was still enthusiasm about the idea, so it’s possible that Suri will one day star in an Indian American family drama of her own.

More like this
17 Photos Of The 'Wednesday' Cast Vs. The 1991 'Addams Family' Cast
By Grace Wehniainen
The 'Firefly Lane' Book Ending Teases Way More Tears To Come In 2023
By K.W. Colyard
Everything To Know About 'Firefly Lane' Season 2 Part 2
By Gretchen Smail
17 Wednesday Addams Quotes For Every Situation
By Grace Wehniainen
Get Even More From Bustle — Sign Up For The Newsletter