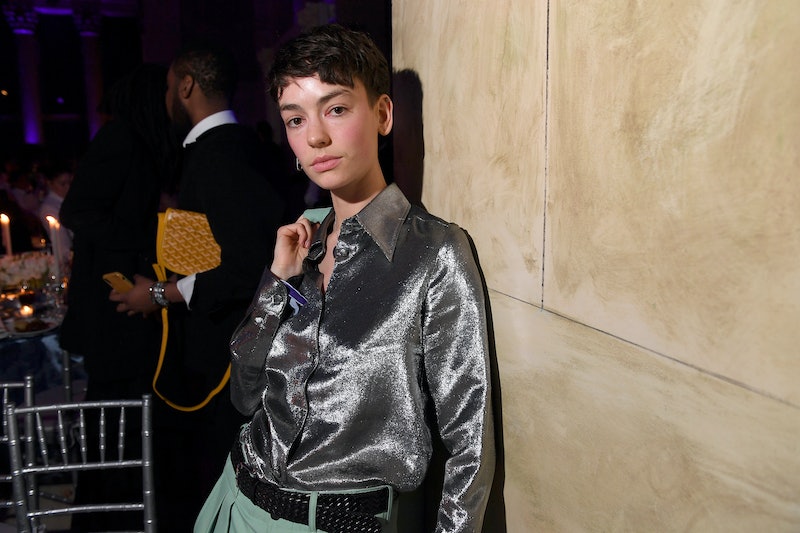 Brigette Lundy-Paine is on their way to becoming a household name. The 26-year-old actor has been starring as Casey on the acclaimed Netflix series Atypical since 2018, and the series has increased in both popularity and critical acclaim in each of its three seasons. Now, Lundy-Paine is starring in what is arguably their highest-profile role to date by portraying the daughter of Keanu Reeves' Ted "Theodore" Logan in the comedy film Bill & Ted Face the Music. The film is the very long-awaited third installment of the cult-favorite franchise that includes 1989's Bill & Ted's Excellent Adventure and 1991's Bill & Ted's Bogus Journey. So since you're probably going to be seeing a lot more of Brigette Lundy-Paine from here on out, it's probably a good idea to get to know them a little better. You can start by reading on.

They Identify As Non-Binary & Queer

In 2019, the queer actor came out as non-binary on Instagram. They do not identify with any specific gender nor sexual orientation, and they prefer to use they/them pronouns. Playing Casey, a teenager with a queer journey of her own on Atypical, helped Lundy-Paine in discovering their own gender and sexual identities. "I think that part of the lesson [that I learned from Casey is] that it’s OK to stand up for yourself and that it’s OK to be your truth, and for me, that truth was that I’m a queer person who doesn’t align with gender," Lundy-Paine tells Bustle. "And that was something that I had been coming to terms with long before the show, but the show was a vessel for me to find the courage to embrace that."

They're In An Improvised Band

In addition to acting, Lundy-Paine is also a member of a legitimate musical act. The band, Subtle Pride, consists of Lundy-Paine and their childhood friends Mina Walker, Zach Donovan, and Misha Brooks. The group performs mostly-improvised live shows regularly at various types of venues and has also recorded some music on their own label. The group had very humble and unexpected beginnings. "One night Mina and I joked that we were releasing an album later in the year called Backpack on a Track, because of some photos we had taken with backpacks on a train track," Lundy-Paine told Flaunt in a 2018 interview. "Somebody called us on our bluff, and they said, ‘Well, sing us one of your singles.’ We looked at each other and we made something up on the spot, and we were so impressed! Later that week, Zach and Misha came over and we decided to kind of try it."

Being An Actor Was Their Backup Plan

Both of Lundy-Paine's parents were heavily involved in theater growing up, so they always assumed they would grow up to be an actor and follow in the family business. But while most people who grow up wanting to be actors ultimately fail and fall back on a safer career, Lundy-Paine had the opposite experience. "A lot of the schools I applied to were for environmental science and that was ... just wanting to do something that I hadn’t been doing my whole life," Lundy-Paine tells Bustle. "But the cards were not stacked that way. I didn’t get into any schools for environmental science, and I only got into two for acting. So I was sort of forced into studying acting in college."

They've Been In Big Movies With Big Stars

Though known mainly for their roles in Atypical and the upcoming Bill & Ted film, Lundy-Paine has kept busy in other high profile projects. They appeared in 2017's The Glass Castle alongside Brie Larson, Woody Harrelson, and Naomi Watts. They played the girlfriend of Christoph Waltz's character in the 2017 Matt Damon film Downsizing. And they played Megyn Kelly's research assistant in the ripped-from-the-headlines 2019 Fox News drama Bombshell, which starred such luminaries as Nicole Kidman, Margot Robbie, and Charlize Theron as Kelly. Not bad company for an up-and-coming actor.