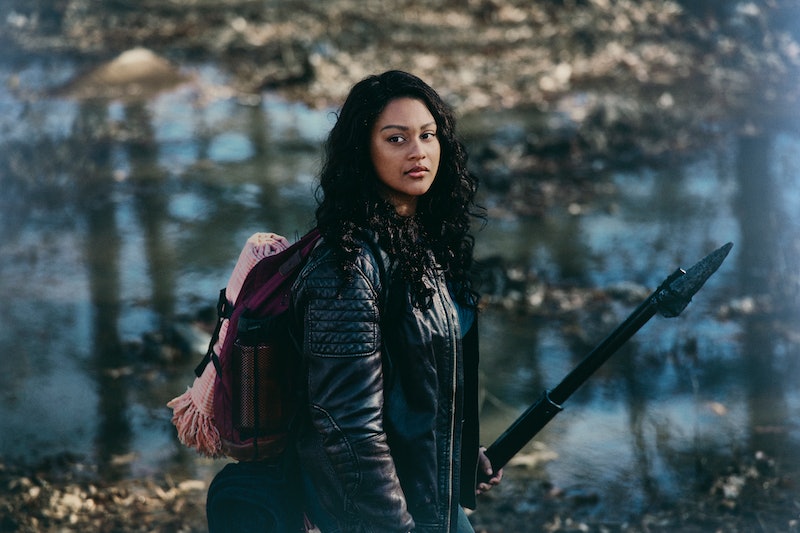 AMC's new YA series, The Walking Dead: World Beyond centers on a new generation of zombie apocalypse survivors. Set in Nebraska 10 years after the apocalypse broke out, the show follows sisters Hope and Iris as they embark on a cross-country journey to save their dad from the shady Civic Republic Military (CRM). In the process, it introduces viewers to two relatively new leading ladies: Alexa Mansour (who plays Hope) and Aliyah Royale (who plays Iris).

Per NBCNews, Royale is a 20-year-old Maryland native who started taking acting classes and performing in church plays from a young age. At 11 years old, she made the decision to move to Los Angeles so she could pursue her craft professionally. “We were chilling in our Michigan home and I told my mom that I might be good at this, and she took a leap of faith,” Royale told NBC. "Now here we are.”

Before World Beyond, Royale starred in Ava DuVernay's 2019 miniseriesThe Red Line as Jira, a teen mourning the death of her Black father after he's mistakenly shot by a white police officer during a drugstore robbery. Playing Jira was an important way for Royale to use her platform to "talk about something real" like police brutality and corruption, the actress told NBC.

That Jira was so outspoken also struck a chord with Royale. "Jira is resilient, and to play a teenage girl who’s definite in her choices and knows what she wants is extremely important," she explained to Collider. "It’s important that we can show how it’s possible for a girl to know that she’s smart and that she deserves better, and has no problem with voicing it, even when it gets her in trouble."

Royale carries this ethos into her role as Iris, a smart and no-nonsense student who's also a respected leader in their thriving community – a youthful colony that's a satellite outpost to the CRM. Though Iris has grown up in relative safety for the past 10 years, she's spurred to leave the comforts of home after receiving a panicked message from her scientist father at the CRM. Accompanying her on the journey are her sister Hope and two boys from the colony, Silas (Hal Cumpston) and Elton (Nicolas Cantu) — three people Iris immediately feels responsible for protecting.

“I like to describe [Iris] as a really good friend. She is very sweet, loyal, and a giver," Royale told AlternativeMindz. At the same time, "Iris is ready to do anything for anyone at anytime," whether it be giving a bullied kid a snack or taking out a walker — called empties in World Beyond — so no one gets hurt.

Royale told LeafyPage that it was interesting to play a slightly younger character like Iris, because she had to "find the balance between what’s curious and what’s naive, what’s a power move and what’s rebellious.”

Ultimately, though, Royale said that the role taught her how to be tenacious in her own life. "[Iris] just want[s] to take care of people around her, including her sister. I’m [also] accountable for several of the really important people in my life, and Iris taught me that even when you are afraid, there’s a way to come out on top and still make choices that seem hard to make at that moment."