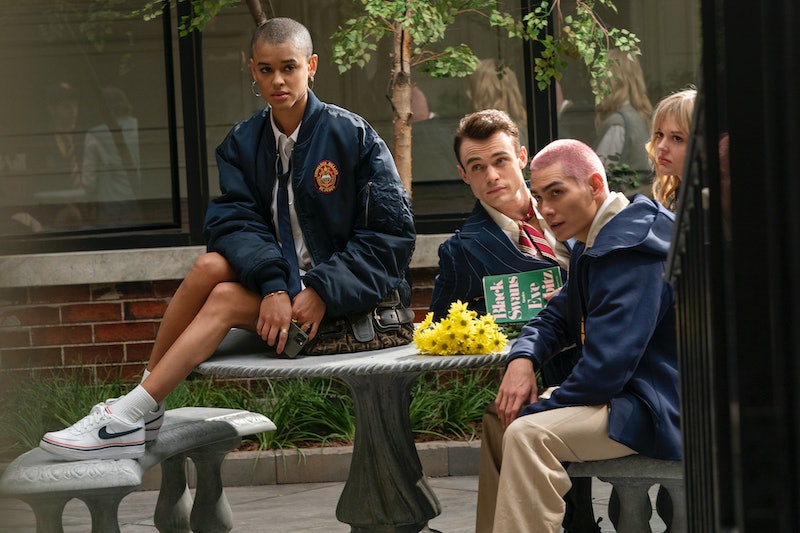 There’s a new queen be ruling over Constance Billard in Gossip Girl. Set nine years after the original series, HBO Max’s reboot once again follows a generation of elite Upper East Siders. Leading the pack is Julien Calloway, a wealthy and enviously fashionable influencer who secretly arranges for her half-sister Zoya (Whitney Peak) to begin attending the same school after a lifetime apart.

She’s played by 27-year-old Jordan Alexander, who sees her character as having an “effortlessness about her that causes people to listen and pay attention and want to do what she does,” the actor told W Magazine. But Alexander added that Julien is intentional about her platform. “That is the essence of her character. She’s navigating that pedestal in a way that I think will be interesting.”

Alexander’s approach to the role was similarly intentional. The original series was known for its opulence and guiltless wealth, and while there’s still be plenty of that in the new show, Alexander likes that the story is more grounded in the real world. “I want to create an inclusive space where we’re not just reiterating the otherness of anyone who is not, you know, the list of things that people were allowed to be [in the original series]: rich and fabulous and famous,” she told W. “[The reboot is] extravagant in every way possible, but they have also very carefully created this world where you are totally adrift in the fantasy and the campiness, but you are subtly being confronted with these issues.”

Learn more about the actor bringing Julien to life below.

As Alexander explained to Fashion Magazine, she was born in Vancouver but spent most of her life growing up in Toronto. Her love of fashion — a distinction shared by her character on Gossip Girl — began as a kid, as she explored her grandmother’s clothing boutique and personal closet. “My little sister and I would go into her closet and wear all her clothes; they were so glamorous and fun, and we didn’t care that none of them fit,” Alexander said.

She also had a pretty adventurous upbringing. “I was kinda rough and outdoorsy. I liked to sleep in trees and catch snakes and tadpoles with my sisters. I loved to play outside and climb on everything,” Alexander told Elle Canada.

Around the time she began pursuing acting professionally at 18, Alexander decided to shave her head. “I think I was just having a moment,” she told W Magazine. “I was trying to figure out what I wanted, and one of the things that I didn’t want was hair.” As a Black woman with Black hair, such a decision can be personal, but Alexander explained that for her it was a practical choice. “I love Black hair and the experience, it's such a spiritual thing. But there's also a lot of money. There's also a lot of work. It's a lot of time,” she told W. “I was just finding myself unable to keep up with it, and the solution for me was to take it off.”

Alexander went into deeper detail about her relationship with her hair while speaking to Elle Canada, stating, “I got into the shower and I’ll never forget the feeling of touching my shaved head for the first time.” Her signature look is on full display across her Instagram, where she also shows off both high fashion and casual looks.

Her role in Gossip Girl is her biggest yet, but she previously played a character named Elsie on the Facebook Watch series Sacred Lies.

Outside of acting, Jordan is a full-fledged musician, having performed alongside the likes of Carly Rae Jepsen and Kehlani. She attributes her love of music to her father as well as her friend Jose, both of whom inspired her to begin writing her own songs. “I couldn’t believe you can just create something so beautiful and it can be yours and you can also share it,” she told Elle Canada. “Gossip Girl keeps me very busy, and I love it. I am also constantly writing music.”

More like this
The 'Gossip Girl' Reboot Creator Is “Looking For A New Home” To Air A Potential Season 3
By Brad Witter
'The Queen’s Gambit' Season 2 Tweet Wasn’t From Anya Taylor-Joy
By Mary Kate McGrath, Jack Irvin and Grace Wehniainen
Ashton Kutcher Wants Danny Masterson “To Be Found Innocent” In Rape Retrial
By Jake Viswanath
Pamela Anderson's Sons Brandon & Dylan Have Their Own Hollywood Careers
By Arya Roshanian
Get Even More From Bustle — Sign Up For The Newsletter
From hair trends to relationship advice, our daily newsletter has everything you need to sound like a person who’s on TikTok, even if you aren’t.