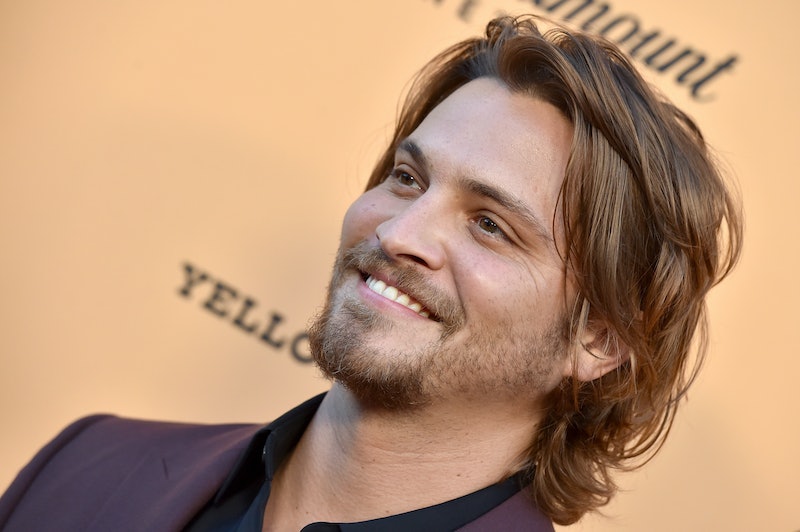 John and Evelyn Dutton’s youngest son Kayce has been a fan favorite on Yellowstone since the show’s debut in 2018. A Navy SEAL who raised a son on a Native American reservation, he was long considered the black sheep of the family. But over the years, he’s slowly proved himself worthy of John’s respect, rising to position of Yellowstone Ranch foreman and narrowly surviving a brutal Season 3 shootout. Now, he has a legion of fans who continue to tune in to see what he’ll do next. “My mom watches for KD and that’s all,” one Instagram user posted.

Kayce is played by Luke Grimes, who you might recognize from a variety of films depending on your taste. In the 2016 Western Magnificent Seven, he played Teddy Q, who helps to hire Denzel Washington’s character to defend their small town. He also portrayed Marc Lee, the first SEAL to die during Operation Iraqi Freedom, in the 2014 biographical drama American Sniper, and Christian Grey’s brother Elliot in the steamy Fifty Shades of Grey franchise. Next, he’s set to lead the rom-com Happiness for Beginners alongside Ellie Kemper. Here’s everything else to know about the Yellowstone star.

Grimes Had A Religious Upbringing

Grimes grew up in Dayton, Ohio as the son of a Pentecostal pastor. “Growing up the way I did and having a dad who’s a pastor, [being religious is] just in you,” the 37-year-old actor told Bradley Cooper during a conversation for Interview Magazine. “I know it so well because I bought it hook, line, and sinker from the time I was born until sometime in my 20s when I’d traveled enough and been around the world enough and learned about other cultures enough to let some of it go. But it’s still very present.”

Once he’d decided to become an actor, Grimes wanted to move out to Los Angeles, but he ended up attending the American Academy of Dramatic Arts in New York instead. “We found a reputable school that wasn’t as expensive as Juilliard or Tisch, but the approach was similar,” he told As If Magazine. “My parents sacrificed a lot to send me there, and I think that changed my trajectory ... My training provided me with a good sense of the kind of actor I wanted to be, and the kind of projects I wanted to do.”

Grimes Is Thoughtful About His Roles

As Grimes explained to Cooper, when he first started in Hollywood, his agent advised him to only take a role if he actually liked it. “I didn’t know anything about the business, so that seemed kind of surprising to me,” he said. But the more he worked, the more he realized each project is a “big experience and you go off for long periods of time. And if you’re doing things that you don’t want to be doing or you’re working with people who aren’t making you better ... you could be wasting your time,” he said. “You might be making some money, but you might not be improving as an actor.”

Though Grimes keeps a low profile on social media, his wife, model Bianca Rodrigues, often posts photos of the two of them on her Instagram page. “I’m so lucky to have you in my life. Happy anniversary anjo! Te amo,” she wrote on Nov. 22 alongside a black-and-white photo of them together.

To Grimes, Yellowstone is important because it explores a number of issues about ranch life and land ownership. “The show addresses how the Native Americans feel having been placed in terrible reservations when the land was rightfully theirs from the beginning of our nation’s history,” he told As If Magazine. “I love my character because he is caught in-between: he is a part of the Dutton family who own the cattle ranch, but he is married to a Native American woman; they have a child together, and live on the reservation. Subsequently, he is not quite accepted by either side ... he doesn’t know where he belongs. There’s something about being in the center of really important issues while playing a character that I relate to that has been very rewarding.” He added that Kayce is refreshing because while he embodies a lot of “masculine traits,” he’s got a lot of heart and vulnerability, too.