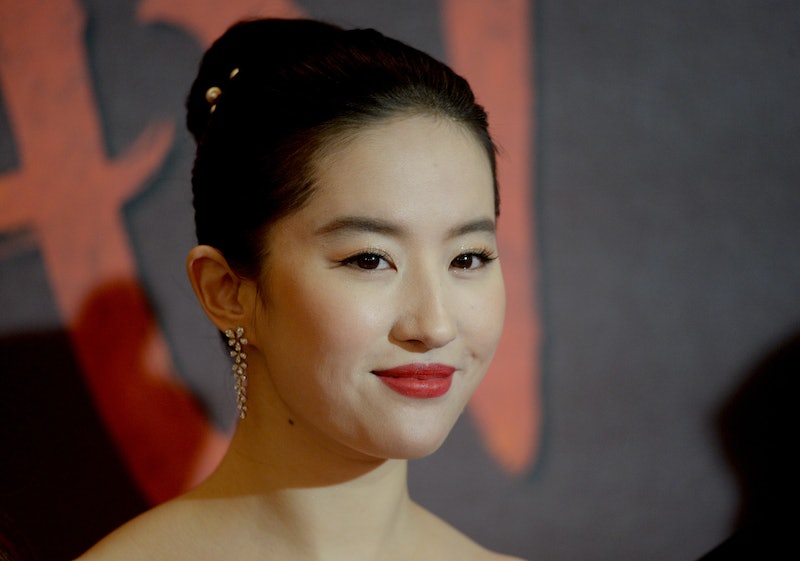 Disney's latest live-action remake of one of their beloved animated classics is none other than Mulan. The film was initially marked for a theatrical release in the U.S., but due to the coronavirus pandemic, it premiered as a premium rental on the Disney+ streaming service. Disney has a lot riding on the movie as an investment, and the person who plays Mulan is posed to be the film's breakout star. But the Chinese actor Yifei Liu who plays Mulan has had her fair share of controversy. Read on for more about Liu.

She’s Been Acting For A Long Time

The animated version of Mulan is a 16-year-old girl, so it stands to reason that the actor cast to play the character in the new live-action film would be rather young. But that's not really the case. Yifei Liu is 33 years old — more than double the age of her cartoon counterpart. She's no new kid on the block when it comes to making movies, either. Though largely unknown to American audiences, Liu has been a big movie and TV star in China for years. According to IMDb, she made her acting debut as a regular on the Chinese TV series The Story of a Noble Family in 2002, and her film debut was in 2004's Love of May. In 2006, she won the first-ever Golden Eagle Goddess Award — a fan-voted award at China's Emmys-like Golden Eagle Awards.

Early on in her career, Liu — who has also sometimes gone by the stage name Crystal Liu — found some success as a singer in addition to her acting career. According to the Huffington Post, she signed with Sony Records in 2005 and released two albums the following year. Liu has continued to shine as a singer in a number of her movies. That includes Mulan, where she sings the film's theme song, "Reflection," in Mandarin over the film's credits, according to USA Today.

Liu was born in China, in the city of Wuhan, and is a Chinese citizen by birth. But at the age of 10, she moved with her mother to Queens, NY, where she lived for five years, as reported by W. According to Elle, That period of time met the threshold for Liu to become a U.S. citizen, which she did. Soon after getting her American citizenship, Liu returned to China to pursue an acting career in her home country. Naturally, things worked out for her.

Mulan has had its fair share of controversy. According to Time in 2019, "Pro-democracy protests have roiled Hong Kong following Hong Kong Chief Executive Carrie Lam’s introduction of a bill last March that would allow for criminal extraditions to mainland China. Lam is backed by the mainland government, and pro-democracy advocates fear the bill would allow Beijing to punish dissidents more easily and forcefully. In August, demonstrators occupied Hong Kong’s airport and clashes erupted with police. Protesters faced batons, pepper spray, tear gas and rubber bullets from the police. Several prominent organizations, including the United Nations human rights office and Amnesty International, have condemned the Hong Kong police’s use of force during the protests. The police were also accused of allowing an armed mob to attack protestors in July, resulting in dozens of injuries."

Which is where Liu comes in. In August 2019, the actor reshared a post on Weibo — a popular Chinese social media site — from the state-backed newspaper People’s Daily that declared her support for the Hong Kong police. According to The Hollywood Reporter Liu wrote, "I support Hong Kong's police, you can beat me up now," followed by "What a shame for Hong Kong." She also added the hashtag #IAlsoSupportTheHongKongPolice and a heart emoji in her post. Backlash quickly ensued with #BoycottMulan trending for a time.