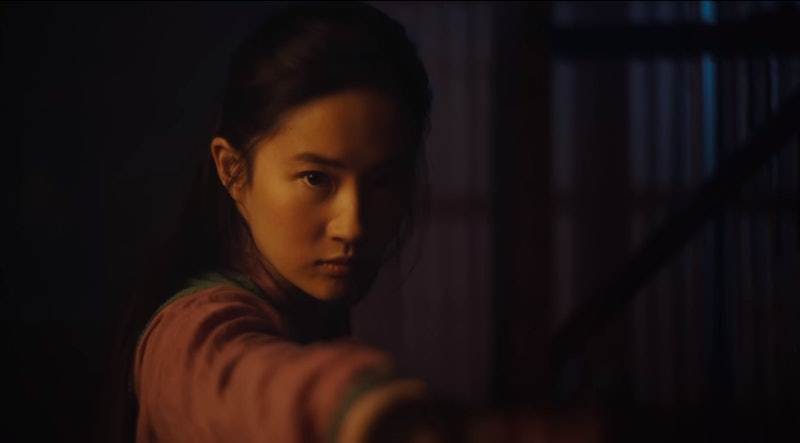 The U.S. Women's Team's domination of the soccer field wasn't the only reason to tune into the World Cup on Sunday. The first trailer for Disney's live-action Mulan premiered, and revealed the famed Disney princess in all of her gender stereotype-busting glory. In the trailer, actor Liu Yifei, also known as Crystal Liu, perfectly embodies Mulan's rebellious spirit as she heads to war to protect her family.

Per Disney's press release, the official description of the plot reads:

"When the Emperor of China issues a decree that one man per family must serve in the Imperial Army to defend the country from Northern invaders, Hua Mulan, the eldest daughter of an honored warrior, steps in to take the place of her ailing father. Masquerading as a man, Hua Jun, she is tested every step of the way and must harness her inner-strength and embrace her true potential. It is an epic journey that will transform her into an honored warrior and earn her the respect of a grateful nation…and a proud father."

The Disney animated film, which premiered in 1998, as per CNN, followed Mulan, who enlists in the Chinese military to prevent her sick father from being drafted for a war. Since women were not allowed to enlist under the rule, she impersonated a man to be taken seriously as a recruit. It's clear from the trailer that elements of this story will remain the same, but the remake is also putting its own spin on the original story.

According to the trailer, Mulan is not on board with being set up by a matchmaker, but her desire to bring honor to her family drives her more than anything else. And she'll get her chance to bring honor not by being a wife, but by being a warrior. "It is my duty to fight," she says at the end of the teaser.

Fans of Mulan will be excited to learn more about the remake. A few details about the film were available before the trailer dropped, including the cast. Yoson An will star as Chen Honghui, the main character's close friend and eventual love interest. The rest of the cast includes Jet Li, Rosalind Chao, Cheng Pei-pei, Nelson Lee, Chum Ehelepola, Gong Li. Fans might note this is small change from the Disney film, in which her main romantic interest was Li Shang. Another change? It doesn't look like Mushu, the character's original sidekick, will appear in the remake. Although, given the serious tone of the trailer that's not too surprising.

On Saturday, actor Jimmy Wong teased the new trailer on Twitter. Wong, who plays Ling, promised fans they would be excited with the first look at the film. "By happenstance, I did get to see a sneak peak of the trailer, just a little bit, and all I can say is a lot of you are going to be very happy with the result," he said. "And this is just a tiny piece of the movie."

The trailer wasn't the first sneak peek Disney has offered from the film. In August of 2018, Mulan revealed the first look at star Liu Yifei in the title role, according to The Hollywood Reporter. Producers reportedly saw over 1,000 auditions from actors to cast the iconic role. The movie filmed in New Zealand and China, which is clear from the scenery in the first trailer.

The new Mulan is directed by Niki Caro, as reported by CNN, and fans might recognize the director from her work on The Zookeeper's Wife. The movie will hit theaters in Mach 27, 2020. From the trailer, it's clear the live-action Mulan is ready to tell this iconic character's heroic story for a new generation.

More like this
The 'Hocus Pocus' Sequel Finally Has A Release Date & It Makes Total Sense
By Shannon Barbour and Radhika Menon
Kimberly J. Brown & Daniel Kountz Looked Back On Their ‘Halloweentown’ Romance
By Stephanie Topacio Long
All The Sneaky Lindsay Lohan Movie Easter Eggs In Her New Ad, Explained
By Stephanie Topacio Long
Anne Hathaway’s ‘The Devil Wears Prada’ Anniversary Post Turned Political
By Brad Witter
Get Even More From Bustle — Sign Up For The Newsletter