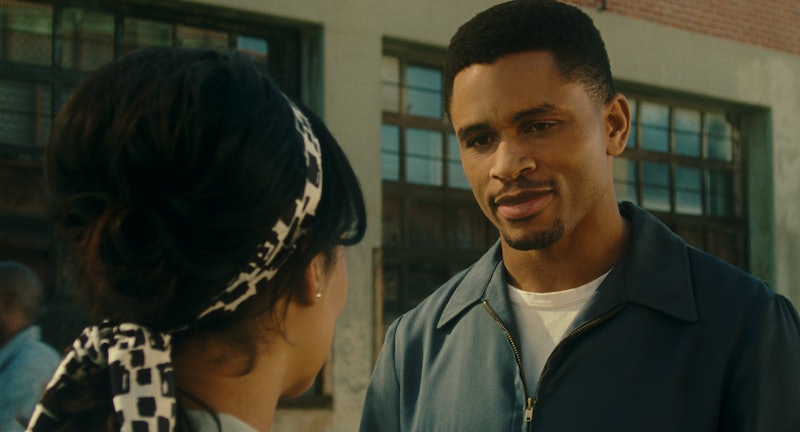 Amazon's latest period romance Sylvie's Love stars Tessa Thompson as a young record store clerk with dreams of making it big as a television producer. Set in 1957, the film is infused with the jazz music of the era and is a sultry, soulful romance. But alongside Thompson, a relatively new face is making his mark in the film scene. So who plays Sylvie's paramour Robert in Sylvie's Love? If you're a football fan, you might recognize him.

Nnamdi Asomugha plays Robert, Sylvie's love interest in the film. The actor and producer is a Louisiana native whose family hails from Nigeria. He's a former NFL cornerback who was drafted in 2003 by the Oakland Raiders. After playing in California for eight years, he played for the Philadelphia Eagles and then the San Francisco 49ers, according to NFL.com. Before leaving the NFL, he dipped his toe into acting with some commercials, a bit on Friday Night Lights, and on Broadway in the play Race where he met his future wife, actor Kerry Washington. He retired from football in 2013, the same year he and Washington got married. She told Marie Claire in 2018, "The last time I did theater, it completely transformed my life. That’s where I met my husband.”

Throughout his entertainment career, Asomugha has produced as well as acted. He executive produced the 2015 Golden-Globe-nominated film Beasts of No Nation, starred in the 2017 indie Crown Heights, produced 2019's Harriet Tubman biopic, Harriet, and appeared on Broadway in Soldier's Play, according to IMDb. He's also produced the 2020 film The Banker, which stars Anthony Mackie and Samuel L. Jackson. To get Sylvie's Love made, he donned his producer hat, too. "The same reason why studios and financiers and other producers were saying no to it was the exact reason that I was in love with it," Asomugha tells Uproxx. "The fact that I hadn’t seen it before."

For Sylvie's Love, Asomugha took up playing the saxophone for real, adding to the film's authenticity. "I wasn't familiar, but I trained for the saxophone for over a year for this part," Asomugha told NPR. "Just to get it down and get down the music. I would love to keep playing, but once we finished shooting, I sort of put it down. My entire family was sort of tired of me playing at all hours."

Asomugha was inspired to jump into show business because of a seriously classic comedy: Eddie Murphy's Coming to America. As he told Vanity Fair, "It was 1989 and we were going back to Nigeria, and I think we were on British Airways or something. And the film that was playing was Coming to America, and I just watched how my dad and my uncle, my mom…Everyone was just cracking up. They could relate because of the storyline, and so that film just made a big impression. And I was like, 'If I can do work that can bring some of these emotions out of people, then that’s when I know it’s good work.'" Here's hoping we'll see him in a comedy next.