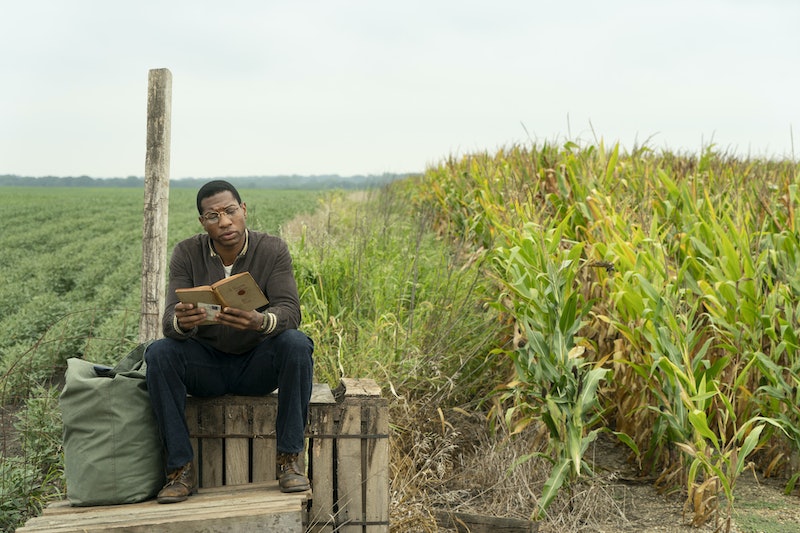 HBO's buzzy new literary adaptation Lovecraft Country includes big names like Jurnee Smollett-Bell and Courtney B. Vance, but there are also a handful of rising actors leading the cast: namely, star Jonathan Majors, who plays Atticus Black (aka Tic). A Korean War veteran, Tic returns home in search of his missing father and ventures out on a road trip with his friend Letitia (Smollett-Bell) and Uncle George (Vance). What follows is a twisted historical fantasy in which they're faced with both the everyday horrors of the Jim Crow South and the Eldritch horrors of H.P. Lovecraft.

Majors may already be familiar from his work in Da 5 Bloods and The Last Black Man in San Francisco, but he'll be new to some viewers, too. According to a 2017 profile in W Magazine, the 30-year-old actor has been acting for nearly two decades. He enrolled in his first acting class at the age of 13, went on to graduate from the North Carolina School of the Arts, and ultimately earned a Masters degree from the Yale School of Drama. He then made his onscreen debut in When We Rise, a 2017 ABC miniseries about the LGBTQ+ movement in the United States in which he played gay rights activist Ken Jones.

Not to be pigeonholed into one genre, Majors followed up with his feature film debut in the period Western Hostiles alongside Oscar nominees Christian Bale and Rosamund Pike. He has also appeared in the crime flick White Boy Rick and the alien invasion sci-fi film Captive State. It was his turn in last year's The Last Black Man In San Francisco in particular that brought Majors to the attention of filmmakers, critics, and audiences alike.

Released by beloved indie film distributor A24, The Last Black Man In San Francisco featured Majors as a man reckoning with the effects of gentrification on his neighborhood, his friends and family, and his own personal history. IndieWire's David Ehrlich called Majors' performance "flat-out phenomenal," and fans on Twitter launched campaigns for the Oscars to recognize his work. Ultimately, the indie film proved too low-profile for the lofty attentions of the Academy, but Majors still received a slew of Supporting Actor and Breakthrough Performance nods from the Gotham Awards, the Independent Spirit Awards, the Black Reel Awards, and many regional critics' groups.

After that breakthrough role, Majors appeared in Spike Lee's Da 5 Bloods, a Vietnam war drama that premiered on Netflix in June and is already earning him awards chatter once again. The strained relationship between Majors' character and his veteran father (played by The Good Fight's Delroy Lindo) is in many ways the beating heart of Lee's sprawling and ambitious narrative.

After graduating with a degree from Yale, making your feature film debut, earning accolades and awards for multiple films, and headlining an HBO series all in the span of four years, what's next for Majors? The actor already has his next two projects lined up: The Harder They Fall, a film produced for Netflix by Jay-Z, in which he'll star as a man seeking vengeance against Idris Elba; and the Korean war drama Devotion, in which he and Glen Powell (Hidden Figures) will co-star as two heroic fighter pilots who forge a meaningful friendship. Majors may not have an Oscar nomination yet, but with a track record this strong, it's only a matter of time…