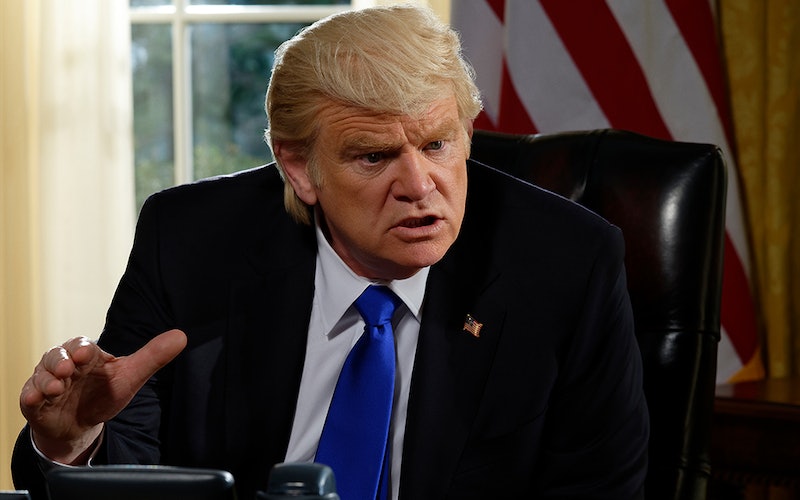 Ever since he was elected president, almost all film and TV depictions of Donald Trump have been comedic. That's no surprise, really, as the 45th president is extremely easy to make fun of. But instead of adding to the collection of satirical impressions of Trump as an orange-faced clown in the Oval Office, Showtime is going a different route with its new miniseries The Comey Rule. And one look at who plays Trump in The Comey Rule will show you that the series is aiming for drama, not laughs.

Brendan Gleeson plays Trump in the two-episode series, which dramatizes former FBI Director James Comey's (Jeff Daniels) role in the investigation of Hillary Clinton's emails and his subsequent dealings with the president, which saw him fired and vilified. Gleeson is bringing gravitas to his role as Trump, making the 45th president and wannabe-authoritarian appear frightening and real in a TV portrayal for the first time. "He and I had a lot of conversations about playing Trump not as a villain, not as a bad guy, not as a cartoon, but just as a human being where his actions define him," series director Billy Ray told Uproxx of Gleeson. "Then, I left it up to Brendan to get the voice right and to get the movements right. And the first time I ever heard him do the voice was actually the first time he ever did it on the set ... It was unbelievably scary." Ray and Gleeson had conversations about keeping comedy out of his Trump portrayal. "Look, we are going to be the first, and perhaps only, dramatic interpretation of Donald Trump ever," he said. "That’s a real responsibility, and we can’t do this as a cartoon. And he didn’t want to do it as a cartoon."

Trump is hardly the first high-profile role Gleeson has taken on. The 65-year-old Irish actor won an Emmy for his portrayal of British Prime Minister Winston Churchill in the 2009 HBO film Into the Storm, and he has been nominated for two Golden Globe Awards; his first for his role in the 2008 cult classic In Bruges, and his second in 2011 for the Irish film The Guard. He's also had his share of blockbuster roles, too: You probably recognize him best as Mad-Eye Moody from the Harry Potter films, but he's also starred in films like Paddington 2, Braveheart, Gangs of New York, and 28 Days Later. Gleeson is also the father of actors Brian Gleeson and Domhnall Gleeson, the latter of whom you may know from his starring roles in Ex Machina, the Star Wars sequel trilogy, or from the Harry Potter franchise, where he appeared alongside his father as Bill Weasley.

With such an accomplished actor taking the role very seriously, you should be prepared for an entirely different kind of Donald Trump portrayal than what you're used to seeing in The Comey Rule.