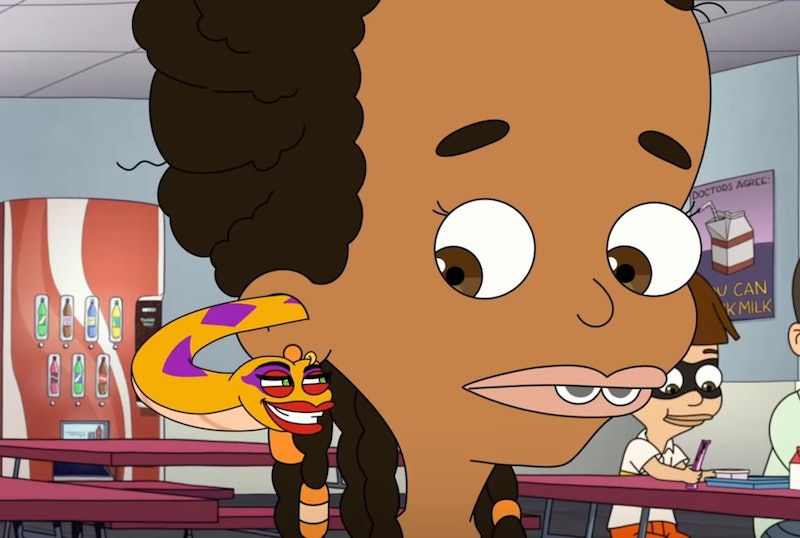 Big Mouth Season 5 introduces a new crop of creatures who, as hormone monster Maurice puts it, “infect your soul.” Sometimes they’re butterfly-like lovebugs, but other times they can transform into spiteful hate worms that seize on the teens’ negative emotions. Missy’s hate worm, Rochelle, is the latter.

Voiced by Keke Palmer, Rochelle appears to Missy after she begins to grow frustrated by Jessi and Ali’s increasingly close friendship. When the two then also co-opt her affinity group, Missy is sent into a rage spiral egged on by Rochelle.

Palmer’s voice will likely be recognizable to fans. She has a lengthy filmography, but most recently starred in the 2019 film Hustlers alongside Jennifer Lopez as well as the third season of the VH1 series Scream. Next, she’s set to lead the upcoming movie Alice, which is based on the true story of a woman of servitude in 1800s Georgia who escapes to realize it’s actually 1973. She’s also hosting and executive-producing the Disney+ competition series Foodtastic, which follows skilled artists as they create extravagant scene work and larger-than-life sculptures made entirely out of food. And Palmer has other voice work in the pipeline too: she voices an activist character named Maya in the Disney+ Proud Family reboot and will reprise her role as Rochelle in Big Mouth’s upcoming spinoff Human Resources.

The new series, which does not yet have a premiere date, will take viewers inside the world and workplace of the many creatures who guide and torment Big Mouth’s teens. Palmer will appear in the show alongside Brandon Kyle Goodman (as Nick’s lovebug Walter) and Pamela Adlon (as Jessi’s lovebug Sonya). Big Mouth stars Nick Kroll (Hormone Monster Maurice) and Maya Rudolph (Hormone Monstress Connie) will also be heavily featured in addition to other creatures such as the Shame Wizard (David Thewlis), Depression Kitty (Jean Smart), and even a Logic Rock named Pete (Randall Park).

Human Resources is billed as being more adult than Big Mouth, which, though raunchy, is centered around the awkwardness of puberty and only shows the monsters as they relate to the kids. The new series allowed Big Mouth’s writing team to depict the creatures more fully. “You have these characters that represent a major force in the human condition,” Kroll told Variety in June. “The challenge has been that these characters don’t only function according to the one thing they do professionally. The Logic Rock is filled with a lot of emotion and love and that defies his nature. Building out the characters in that complex way has been a joy.”