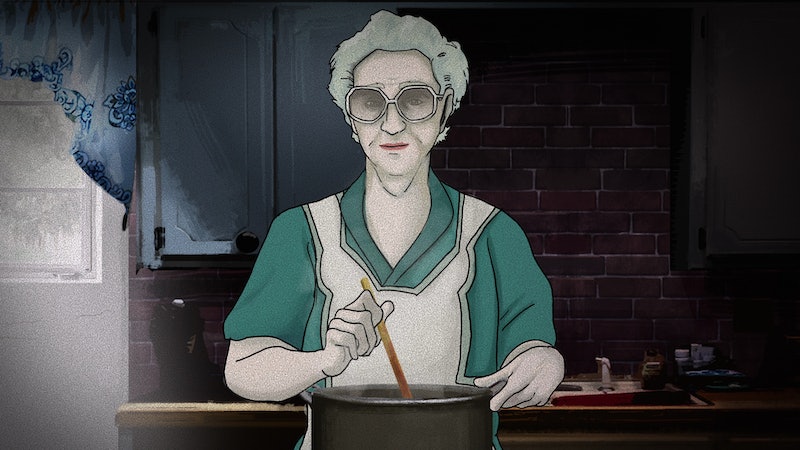 Netflix’s latest true crime series, Worst Roommate Ever, is exactly as its name suggests: a docuseries about nightmarish roommates. The first episode centers around one of the worst of all: Dorothea Puente, a Sacramento, California woman who has been dubbed Sacramento’s most notorious murderer. Puente was convicted in 1993 of killing nine tenants who lived in her downtown boarding home in the 1980s. She was sentenced to life in prison without possibility of parole, but proclaimed innocence until her death in 2011.

According to Sactown Mag, Puente was born in 1929 in Redlands, California as the sixth of seven children. Her parents died when she was young, and she was shuttled around to different foster homes before eventually becoming a sex worker at 16. She had four husbands — the second of whom had her committed to a psychiatric ward in 1961, claiming that she had an unhealthy appetite for drinking, gambling, and sex. Puente separated from the third husband, Mexican immigrant Roberto Puente, in 1969, but she kept his name. Shortly after their separation, she opened an unlicensed alcohol rehab boarding house at 21st and F Street in Sacramento.

Puente developed a strong rapport with social workers in the area because she was willing to accept the most difficult people with substance use disorders, along with disabled and elderly patients. (A prosecutor later described them as “shadow people,” because living on the fringes of society made them easy victims for Puente.) Her three-story Victorian house could sleep more than two dozen tenants, and she acted as an in-home caregiver. She purposely dressed in a matronly gown, softened her voice, wore oversized glasses, and told her tenants that she was 15 years older than she actually was. The purpose of this was to disarm them while she drugged them with tranquilizers and stole their Social Security checks, money, and valuables, per court documents.

Puente always denied this. “Those cases were lies,” she told Sactown Mag reporter Martin Kuz, who visited Puente at the Central California Women’s Facility in Chowchilla in 2009. “I didn’t drug anyone. I’m not that kind of person.”

Puente was eventually arrested in 1982. She was sentenced to five years in prison but released after three for good behavior. In 1986, in violation of her probation, she opened another boarding house at 1426 F Street that could hold eight tenants. Assumedly unaware that Puente was an unlicensed ex-convict, social workers and advocates for houseless people once again sent their clients to her. Federal probation officers actually visited the place several times, but due to Puente’s tidy home and grandmotherly facade, they always left convinced that the people they saw there were friends and family and not illegal tenants. Puente was also particularly immune from criticism because of her standing within the Latinx communities. She often donated to charities, claimed Mexico was her birthplace — using Roberto’s last name helped give her false legitimacy — and provided affordable medical care to Latinx people under the lie that she served as a nurse during World War II.

But in 1988, a social worker noticed that one of their clients had gone missing, and his last known location was Puente’s house. So on Nov. 11, 1988, detectives began looking around the boarding house with Puente’s permission. Everything appeared to be normal, but a tip from a tenant sent them to the backyard, where there were several filled holes. Puente said she’d buried trash there, and strangely even gave them a shovel to check. They eventually dug up five bodies, but by then Puente, then 59 years old, had fled. Shortly afterward, they found two more bodies: some were mummified while others were missing body parts, and all of them were low income elderly people.

On Nov. 17, 1988, Puente was arrested in Los Angeles after a man in a bar recognized her from the news. She admitted that she’d cashed her client’s checks, but maintained that she never killed anyone. ''I used to be a very good person at one time,” she vaguely told police when asked why she was known as a philanthropist.

Puente was ultimately charged with nine murders, including the seven victims buried in the backyard and two other boarders who were found elsewhere. Her five-month trial began in 1993; Puente never testified, and due to decomposition, the prosecution couldn’t solidly determine the victims’ cause of death. But they alleged that Puente poisoned her tenants with a deadly cocktail of prescription drugs and then buried them in her yard in order to steal their money. After 24 days of deliberation, the jury concluded that Puente was guilty on two counts of first-degree murder and one second-degree count. In March 2011, she died in a state prison in Chowchilla at 82 years old.

“She was just pure evil,” retired social worker Mildred Ballenger told Sactown Mag. “I don’t know that she ever did anything good without a bad motive.”