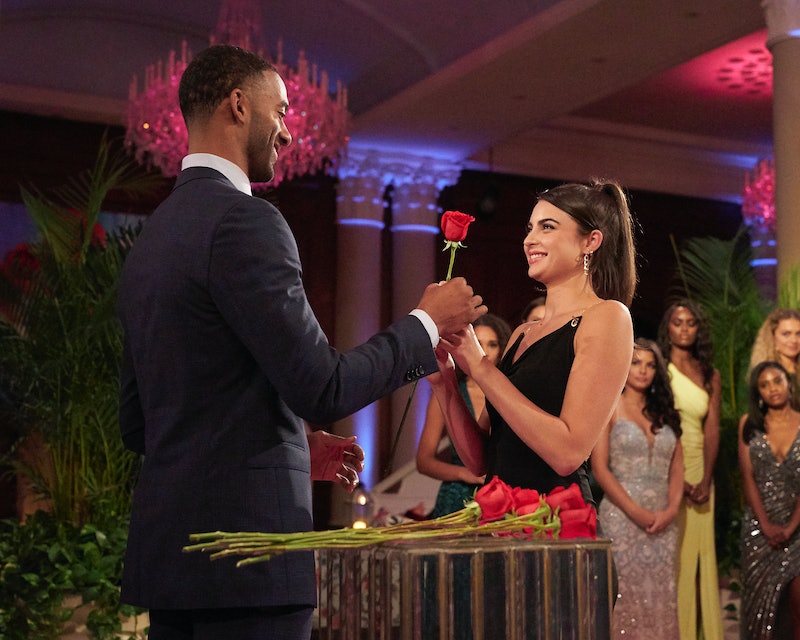 Matt James and Rachael Kirkconnell have two loves in common: each other and charcuterie boards. Every Bachelor Monday, Matt has shared a new charcuterie creation on social media, which fans think may be another hint that Rachael wins his season.

According to Rachael's ABC bio, "nothing makes her happier than a good movie, good wine, and charcuterie boards." And since filming The Bachelor, Matt seems to be embracing those things, too. He's been sharing a number of charcuterie boards on TikTok: first, a very romantic Teddy Graham heart; then, a board with Bagel Bites, dino-shaped chicken nuggets, and PB&J sandwiches. Matt's most recent work featured a cake that was sent to him reading "LEARN HOW TO KISS WITH YOUR EYES CLOSED," which he complemented with Little Debbie zebra cakes, oatmeal cream pies, and Twinkies.

This all comes after Instagram fan account @bachelorsleuths noticed that Matt has also been listening to one of Rachael's playlists on Spotify. While it's possible the two have kept in touch on a friendly basis, it seems more likely that these are all clues that Rachael and Matt are together — particularly considering Bachelor blogger Reality Steve has reported she makes it to Matt's final four.

Nothing is certain until the final rose is handed out, but the evidence is certainly piling up.

More like this
The Bachelor’s Christina Mandrell Comes From One Of Country Music’s Most Famous Families
By Brad Witter
Zach Swears He Didn’t Look Up Contestants Before The Bachelor Began Filming
By Brad Witter
10 Photos Of The Wildest Limo Arrivals From 'The Bachelor' Premiere
By Brad Witter
Nicole & Chris Hinted They’re Still Together After 'Married At First Sight'
By Brad Witter
Get Even More From Bustle — Sign Up For The Newsletter
From hair trends to relationship advice, our daily newsletter has everything you need to sound like a person who’s on TikTok, even if you aren’t.