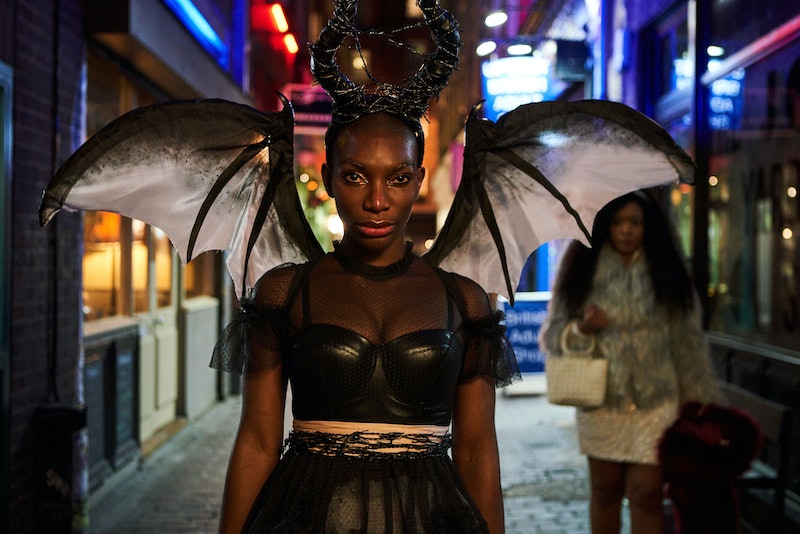 I’ve definitely peed in between two cars when hopes of finding a toilet seemed impossible. I've thrown up into a plastic bag in the middle of an Aldi aisle. And, to my horror, I've dropped a full menstrual cup on the floor of a pub toilet. These aren’t my life's most defining moments (nor are they my worst), they're simply real things that I’ve done. Yet, as a Black British woman, I rarely get to see any representations of those small, often embarrassing, incidences that make us human. Black women who are messy, making mistakes, or simply working things out are all but absent from our screens. But I May Destroy You changed all that, providing us with one of the most accurate depictions of Black British millennial women I’ve personally seen on TV.

Created, written, and starring Michaela Coel, I May Destroy You tells the story of Arabella, a young successful author who has her drink spiked and is sexually assaulted. We follow her on a journey as she tries to continue living her life while unpacking what happened to her. Although the main themes of the drama are about consent and assault, laced through the plot are spotlights on friendship, drug use, and work-life balance.

Black women who are messy, making mistakes, or simply working things out are all but absent from our screens.

There’s one scene where Arabella is in Italy with her best friend Terry (played by Weruche Opia) and after a dizzying night out, she pees outside a closed shop front with a man she’s just met who happens to be a drug dealer. She’s also in good spirits, safe, and having a fun evening. I May Destroy You asks: why must we only see the polar extremes? Either you’ve never seen or heard of a drug before or you’re abusing drugs and it’s ruined your life. Here, Arabella and her best friend use drugs because they want to. They have agency. It’s not a cautionary tale and it’s not about morality.

The representation of Black women on TV is still stifling and embedded in racial stereotyping. Currently we are in the midst of witnessing the “Black lady therapist” stereotype play out on screen, which I can’t help but feel has its roots in the Mammy figure. The sole purpose of these characters is to coddle, listen, protect, and unpick the problems of white and non-Black protagonists and they pop up in everything from Wanderlust to Broad City to Normal People. It’s a challenge to escape the fact that, right now, shows are placing Black women into a plot simply serve to the needs of everyone else. Sometimes it honestly feels easier to find a Black lady therapist on television than in real life.

Outside of the therapist, we’re the judge, the headteacher, the nurse, or just the Black best friend. And we're often the only Black person in the room, meaning we alone carry the weight of presenting “Black Excellence” and “Black Girl Magic” – labels that I find empowering but not easy to live up to at every moment of every day.

Presenting Black women only as morally attuned caregivers, practically excellent in every way and incapable of making mistakes is just as dangerous as being on the opposite end of the scale. I May Destroy You depicts what our lives look like outside the white gaze; Arabella barely has the capacity to look after herself, let alone any white characters.

Standing on the shoulders of characters such as Issa in Insecure, Arabella is a fully formed, multidimensional character and, through her, Coel proves we can be mediocre sometimes, as well as scared, confused, learning, and in need of a helping hand once in a while. I May Destroy You lets people know that, yes, Black women take drugs, smoke, pull all-nighters, and put pads on in front of their mates. Not every Black woman's experiences will resonate with Arabella’s, but that doesn’t make them any less valid. Being defined either by our very best achievements or our lowest moments leaves no middle ground — but the middle ground is what our lives actually look like.