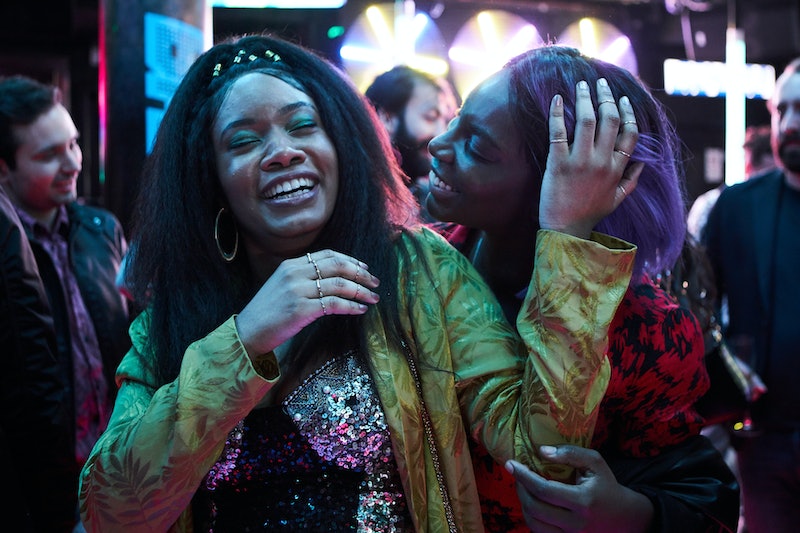 In the most recent I May Destroy You, set three months before the events of the premiere, Terry (played by a blistering Weruche Opia) flies out to Ostia, Italy, where best friend Arabella is writing her next book. The weekend promises to be a drug and drink-filled romp set against Italy’s dreamy southwest coast. Mostly, that's exactly what it is.

To start, Terry and Arabella buy drugs off a person they’ve never met; when they take them, nothing bad happens — a television miracle. The friends spend the day collapsing into laughter, narrowly avoiding being ejected from cafés and clubs for their loopy, drug-addled behavior. For Arabella, whose re-upping of substances (coke, Molly, etc.) outpaces Terry's, the night is one long series of near scrapes she can’t see from inside her own fun bubble. For Terry, who tires of the party before her host, a long walk home through an unfamiliar city doesn’t end as badly as we know it can.

I May Destroy You is proving much more nimble than a cautionary tale. It’s realistic. Arabella takes drugs, and things are fun for her. The dealer she meets at the basketball courts sells her drugs that seem to be exactly what he claimed they were. When she runs into him at the end of the night, Biagio sees her safely home. If the series premiere, in which Arabella survives a drug-facilitated rape, is the worst case scenario (and, of course, it’s somehow still not), then a night of serendipitous ricocheting through Ostia is the other side of the coin.

Still, the episode isn't seduced by Arabella’s good time. Biagio, we learn, is sober for a reason: his mother and sister both died from overdoses. When he tells Arabella to quit using drugs, it's not patronizing and it’s certainly not superior; he is, after all, her drug dealer. It’s just the advice of someone who has already seen the flipside.

Even before Biagio shows up, though, we have the exhausted gaze of Terry to remind us that drugs are usually only fun for the people taking them. As she sobers up, waiting for Arabella to complete bathroom coke runs turns boring. But Terry's still drunk when she decides to leave, and that's when the episode steers onto knottier terrain.

Navigating herself through Ostia's narrow alleys, she attracts the attention of two men standing outside a bar. They drink some more and dance and, eventually, head back to Arabella’s to hook up. There’s no indication Terry's been pressured into the situation, just some insinuation the threesome it isn’t really spontaneous — the men may not be strangers. But the doubts Terry harbors about the consensual encounter are evident in her blank stare even as she texts a friend back home to gloat about the vacation rendezvous. From the moment she was shown her room and its four poster bed, she was excited to have sex in it; now that she has, Terry seems uneasy.

I May Destroy You isn’t just a show about one character's rape, but about consent and all its gradations. If the first episode is a stark look at how drugs leave you vulnerable to others, this episode underscores how they leave us vulnerable to ourselves: Agency, it turns out, is no bulwark against regret.

More like this
Where Is Oscar Torres In 'Only Murders In The Building' Season 2?
By El Hunt
Watch The 'Heartstopper' Cast Joyfully Dance To Whitney Houston at Pride
By El Hunt
Florence Pugh & Zoe Kazan Have Teamed Up For A Major New Netflix Series
By Rachel Mantock
Everything To Know About 'The Undeclared War' Season 2
By Rachel Mantock
Get Even More From Bustle — Sign Up For The Newsletter