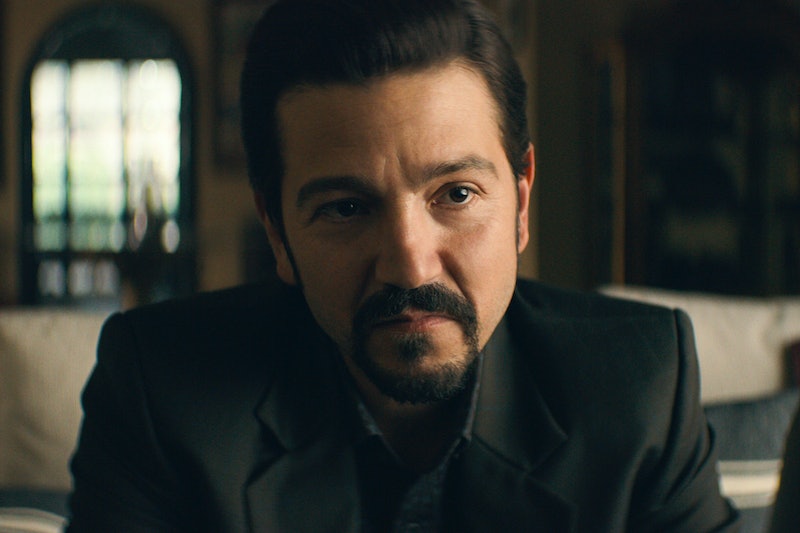 Narcos has never been afraid to eliminate its main antagonist for the sake of historical accuracy. Fans will certainly remember Season 2, which ended with the death of Pablo Escobar despite the fact that he’d been the driving force of the show. The second season of spinoff series Narcos: Mexico took a similar route — concluding not with a death but with the arrest of drug kingpin Félix Gallardo.

Following a season that chronicled DEA agent Walt Breslin’s (Scoot McNairy) attempts to track Gallardo down, the Guadalajara cartel founder was taken into police custody for a laundry list of crimes including drug smuggling, racketeering, violent crimes, and the murder of DEA agent Kiki Camarena (Michael Peña). When the third and final season picks up on Nov. 5, Gallardo will still be behind bars and won’t be featured in the show. Instead, the season will center around a new generation of Mexican kingpins that rise up in the aftermath of his arrest.

In real life, Gallardo was arrested in 1989 and sentenced to 37 years in prison. He initially continued to lead the Guadalajara cartel from his jail cell, arranging drug deals via cell phone and fax machine. However, after being transferred to the Altiplano maximum security prison in 1992, he could no longer contact his associates.

Diego Luna, who plays Gallardo, alluded to this history in a February 2020 interview with Refinery29. “‘In jail’ does not necessarily mean you're out of the business,” he said, seemingly teasing the possibility of his return to Narcos: Mexico. However, it was confirmed eight months later that Luna would not be reprising his role for Season 3. He told Indiewire in April 2020 that after a few years of filming, he simply needed a break from the material. “At the beginning it was fun, but then it became really heavy for me. I need rest, those two years were really intense for me,” he said.

In the meantime, Luna is set to star in the upcoming Disney+ series centered around his Rogue One: A Star Wars Story character Cassian Andor. Details surrounding the as-yet-untitled show are sparse, but Luna told IndieWire that he was eager to work on the project because he felt the most free in his career while filming Rogue One. “I can’t really talk about it. The thing I can tell you, and it’s a nice challenge and it’s a great way to approach a show, but what happens when you already know the ending?” Luna said, referencing Cassian’s death at the end of Rogue One. “Then it becomes about the story. Everything is in how you tell the story and how many different layers you can find. This can’t be a show now where at the end we surprise you with like, ‘Oh no it wasn’t him!’ We’ve already seen the ending.”