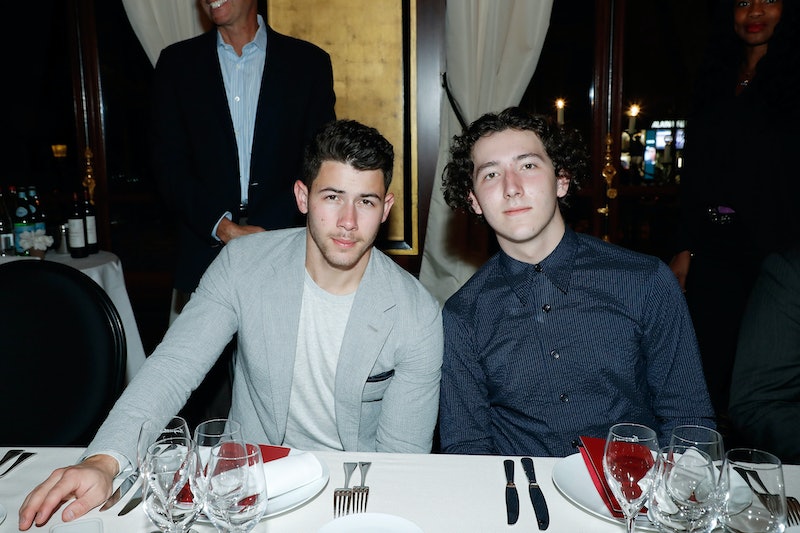 From John Legend and Niall Horan to Pete Davidson and Lilly Singh, plenty of celebs showed up to to poke fun at Nick, Joe, and Kevin Jonas for Netflix’s Jonas Brothers Family Roast. There is, however, one person who’s notably absent: the trio’s youngest brother Frankie Jonas. The 21-year-old tells Bustle over email that while he wanted to attend the filming, he’s currently out of the country, “living [his] lifelong dream of backpacking through Europe.” He still found a way to participate from afar, though. “I wanted to be present in some way and contributed jokes and suggestions,” he adds. “I’m very glad I got to give them some spicy nuggets to exploit for laughs! I’m super excited to see the show, from everything I’ve heard it’s hilarious and a lot of fun.”

Ahead of the taping, Joe told Entertainment Weekly that he and his the siblings had no intention of taking it easy on each other either. “We’ve had conversations [about] boundaries but we're also brothers. Boundaries schmoundaries. We know what we can and cannot do and, also, we’re not trying to break the band up again. My jokes are fun and there’s a couple gut punches. You gotta go for it.” However, he said he and his brothers’ wives — Priyanka Chopra, Sophie Turner, and Danielle Jonas — had “the most ammunition” out of anyone and would probably come at them the hardest.

Had Frankie have been there, he probably would have come at them just as hard. Though Kevin, Joe, and Nick obviously broke big with their band, Frankie has cultivated his own following with self-deprecating humor on TikTok. “Everything that I talk about on TikTok… no one knew that that was how I speak, how I express myself, what I think is funny,” Frankie told Bustle in April. “I was just making jokes, thinking no one was hearing them. And then people heard them and liked them. I thought, ‘I’m going to continue to do this,’ because I’ve never had my thing really. This feels like so much of my thing. It feels so empowering to have a thing.”

Frankie — who made cameos in his brothers’ movies Jonas, Camp Rock 2, and Jonas Brothers: The 3D Concert Experience — now has a busy schedule to contend with. Earlier this year, he signed with United Talent Agency and moved to Los Angeles to pursue various fashion, film, and television opportunities. He also said he planned to continue taking the astrophysics and academic writing classes he’s been attending virtually through Columbia University in New York.