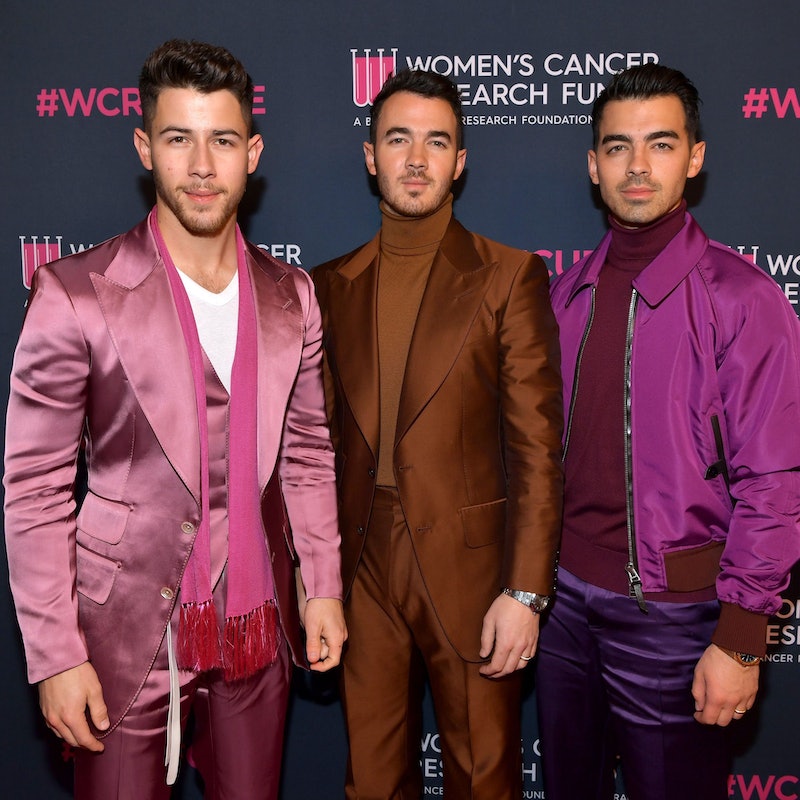 Since the Jonas Brothers reunited in 2019, they’ve released 2019’s Happiness Begins album, a documentary and concert film, scored several hit songs, and toured the globe. It’s hard to think back to a time when Joe, Nick, and Kevin weren’t so tight-knit personally and professionally. But in a new excerpt from their forthcoming memoir, BLOOD, shared on June 8, Joe revealed that their 2013 breakup — which led to a six-year hiatus for the band — took an emotional toll on him that was far more intense than fans may realize. Comparing the dark feelings to a destructive “tsunami,” Joe recalled his reaction to Nick’s proposal for a break.

Set for release on Nov. 9 through Dey Street Books, BLOOD features each brother’s perspective on the band’s multi-decade run, from its 2005 formation to the breakup and recent reunion. “When people picture tsunamis, they usually think of it as this majestic, perfectly formed wave that ends in tragedy and destruction. It's brilliantly blue and crests above the horizon as it approaches landfall. It's almost a work of art,” reads Joe’s excerpt. “That's not really what a tsunami looks like. It's ugly. It's not really even a wave.”

He continues: “The ocean simply doesn't stop when it hits land. It builds up at the shore, and, when there's too much displacement, the water breaks free and the ocean spills forth, collecting filth and destroying everything in its path.” Then, he began retelling the story of the band meeting that sparked their break, noting that he “walked into that meeting like a tourist going to the beach.”

“I kicked back on the couch, said, ‘What's going on,’ and put my feet up,” he writes, illustrating that he didn’t expect what Nick was about to say. “I didn't see the tsunami coming. And the tsunami was inside me, building up as Nick spoke.”

“I still remember the exact words he said,” Joe notes, clarifying that his recollection of the event is slightly “different” from Kevin’s before detailing that Nick declared: “My heart is no longer in this.” His tone was “pastorlike” and reminded Joe of their father. “Something an old-fashioned gentleman might say to his partner when getting divorced. It felt formal, serious. ... and permanent.”

Joe says the “pressure kept building up inside” of him in that moment, which Kevin then “set loose” as he started “going on about a breakup tour.” The excerpt continued: “‘We can figure this out,’ he was saying. ‘We'll just say, ‘This is it. We're breaking up. And we're going to do this farewell tour.’” He was shocked at his older brother’s swift acceptance of Nick’s proposal, writing, “How could he be cool with this so quickly? It was all over, and he was trying to market it. This was not okay. I opened my mouth to speak, and the words burst out.”

The book’s fall 2021 release comes after it was initially announced back in May 2019 and delayed indefinitely in July 2020. Posting the excerpt on Instagram alongside a black-and-white promotional photo of the band, Joe wrote the caption, “The tsunami inside of me built until it broke and crashed through everything in its path… But sometimes things need to break down so they can be built up again on a stronger foundation.” He continued, “As we grow through our lives, I know I’ll always have my brothers, as family, as friends, and as BLOOD.”

More like this
See 'Twilight' Stars Together Again For A Sweet Cullen "Family Reunion"
By Stephanie Topacio Long
OG 'High School Musical' Stars Reunited In Paris & "No Time Has Passed"
By Brad Witter
Lindsay Lohan Explained That 'Mean Girls' Homage In 'Falling For Christmas'
By Brad Witter
The 'Love, Lizzo' Harry Styles Scene Is Just 1 Moment That Made Fans Feel Seen
By Brad Witter
Get Even More From Bustle — Sign Up For The Newsletter