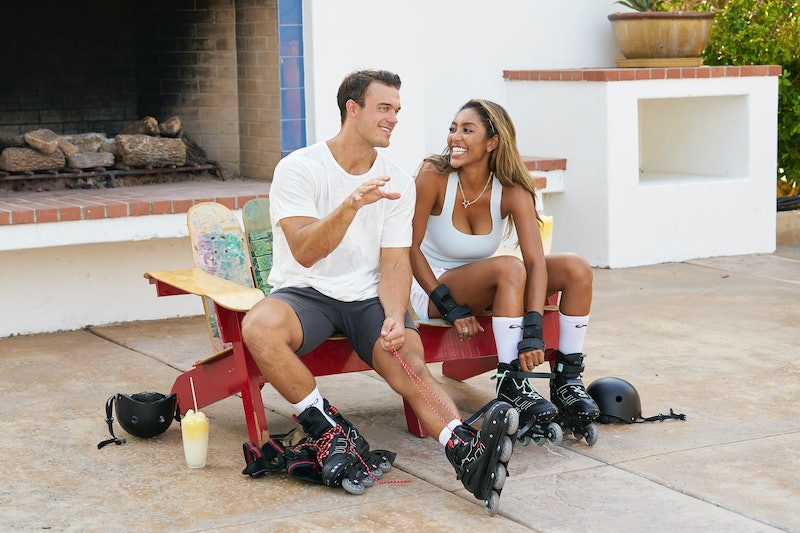 Despite slowly sharing more and more about himself over the course of the season, Ben was sent home on The Bachelorette when he couldn't tell Tayshia that he was in love with her. The Army veteran and personal trainer has had a hard time letting his guard down, which meant that in the moments after his hometown date — when Tayshia needed him to let her know how he felt — Ben was unable to say those three words.

Despite telling his friend and Top Chef star Antonia Lofaso that Tayshia made him happier than he had ever felt in his life, Ben explained that the prospect of sharing those feelings with her was incredibly daunting. "I have the strongest feelings I’ve ever had for a person for her, but love is a scary word. Once you say it, it can’t be unsaid," he admitted. Unfortunately, even with plenty of coaching from his loved ones, Ben just froze up after the date and let Tayshia leave without telling her how he felt.

"I’m incredibly uncomfortable. I’m super nervous. My heart rate’s never been higher. My brain just couldn’t work," he explained to the cameras. "In true Ben fashion, I just blew it. I’m in love with her, and I couldn’t tell her." However, the most heartbreaking moment came after Ben was eliminated, when he still couldn't find the words to express his love for Tayshia and how upset he was to be leaving. Instead, he repeated, "It is what it is," much to Tayshia's surprise.

"I don’t even know what to do. I’m still in love with her," a shocked Ben said after he got into the car to leave La Quinta. "I really thought we were going to be together. I wanted to marry her. She was gonna be my wife, the mother of my children, all these things." But while he realized that he "should have told her how I felt when I had the chance," it wasn't until he was driving away that Ben realized his inability to express himself might have sent him home. "Maybe she loved me, and she thought I didn’t love her back," he said. "And if that’s the case, I f*cking blew it."

Sadly for Ben, Tayshia confirmed that was exactly the reason as she broke down in tears watching him leave. "This is not how I saw things ending with Ben," she admitted, before revealing that she strongly considered giving the trainer her final rose. But Ben's reluctance to open up made it impossible for her to know exactly how he felt at this point in their journey. "I’m not asking for this grand gesture, but the fact that he couldn’t give me one ounce of emotion [broke my heart]. I was just like, 'Please make me feel like these past few weeks meant anything to you,'" Tayshia said.

Based on Ben's last-minute realization — and a preview that teases a dramatic return from him — it seems like Ben might finally found the words to tell Tayshia how he feels. Fans will just have to wait and see whether that grand gesture was enough or if he was too late to win her back.