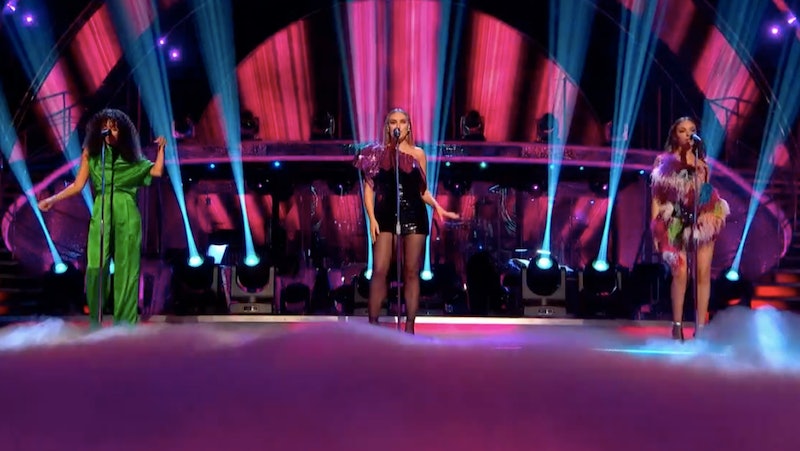 Between a string of music performances and the BBC One talent competition Little Mix: The Search, it's been a hectic year for Little Mix. The band performed on the Strictly Come Dancing results show last night, but as a trio rather than a four-piece, leaving fans wondering why Jesy Nelson was missing from the Little Mix Strictly performance.

Little Mix were the musical guests for Strictly's results show on Dec. 13, which saw contestant Ranvir Singh axed from the competition. As a trio, Leigh-Anne Pinnock, Jade Thirwall, and Perrie Edwards performed "Break Up Song," a single from their new album, Confetti, which debuted at number two on the UK Albums Charts.

Strictly is not the first performance Nelson has missed. Fans first grew concerned when the singer was absent from the Little Mix: The Search finals on Nov. 7.

Following the broadcast on Nov. 7, a spokesperson for the band said that Nelson would be taking an extended break due to "private medical reasons." Since then, no additional details have been released about the 29-year-old's health. "We will not be issuing any further comment currently and ask media to please respect her privacy at this time," said the spokesperson in November.

Nelson has also been absent from Little Mix's performances on the Jonathan Ross Show, Children in Need, and the MTV EMAs. The singer has been out of the spotlight for more than a month and, with no official word confirming when she would return to the group, megafans — dubbed “Mixers” by the girl group — are concerned Nelson may have left for good.

Last year, Nelson opened up about how fame has affected her mental health. The singer released a documentary, Jesy Nelson: Odd One Out, on BBC Three in September 2019, where she spoke about the online abuse that she has endured during her time in the group. She revealed that the intense scrutiny over her looks resulted in severe depression and a suicide attempt.

Nelson has been spotted out and about this week, per Liverpool Echo, but her social media pages have been quiet.

Little Mix is set to embark on their Confetti arena tour in 2021, but there's no word yet on whether Nelson will join.