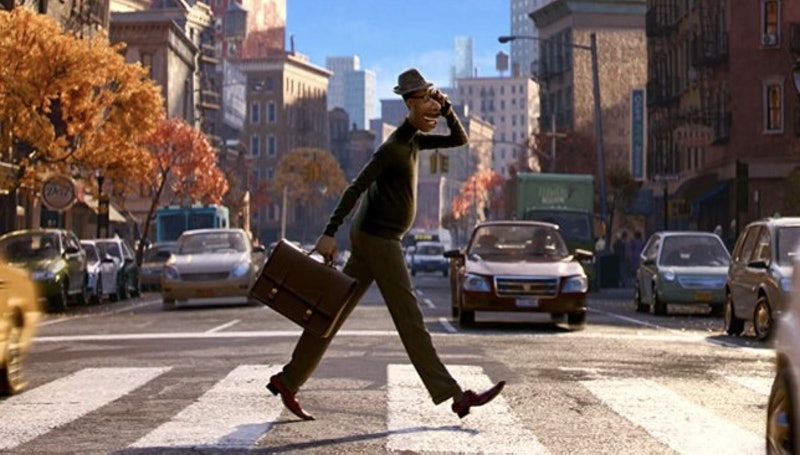 The question of who gets control over the remote is always a sticky one — especially during the holidays, when it seems like every family member wants to watch something different. Your brother is angling for a film with a killer soundtrack. Your niece is demanding an animated feature. And your mom just wants a movie that will make her feel good. Thankfully, all those different wish list items align in the new Pixar film Soul. (Now all you have to argue over is who’s going to get stuck with the fruitcake....)

Jamie Foxx stars as a middle-school music teacher named Joe Gardner, who has just landed his dream gig playing one of the best jazz clubs in New York City. But a cosmic turn of events lands him instead in an alternate realm called The Great Before, where souls get their personalities before coming to Earth. There, Joe teams up with a clever little soul named 22 (Tina Fey) in the hopes of somehow getting back to everything and everyone he’s left behind. (If you haven’t yet, be sure to check out the chills-inducing trailer.)

In addition to an all-star cast (which also includes Questlove and Phylicia Rashad), Soul features brand-new jazz music by Jon Baptiste and a score by Trent Reznor and Atticus Ross. So, yeah, it’s a total crowd pleaser.

With Soul dropping December 25, you have only a few days to sign up for Disney+ if you want to watch (without Twitter spoiling it). And in case you need a little convincing, here are six more reasons to get on the streaming site ahead of Soul’s debut.

1. Warm Up Your Tear Ducts With a Pixar Marathon

Trust us: You won’t want to go into Soul cold. Prep yourself by revisiting one (or two or 20) of Pixar’s past animated hits. Whether you prefer the classics like Toy Story and Monsters, Inc. or newer faves like Inside Out and Coco, they’re all on Disney+ waiting for you (and your box of tissues). Bonus: By brushing up on all things Pixar, you’ll be primed to spot any well-hidden Easter Eggs lurking in the background of Soul.

2. Get Into the Ho-Ho-Holiday Spirit With the Classics

You know what else happens on December 25? (Duh, we don’t really have to spell it out, do we!?) If you’re curious just how overstuffed the Disney+ slate of festive flicks is, simply imagine Santa’s stomach after an all-you-can-eat milk-and-cookies buffet, and you get the idea. Here’s just a partial list of the Christmas classics you can binge right now: Home Alone, The Nightmare Before Christmas, Mickey’s Christmas Carol, The Santa Clause, The Muppet Christmas Carol, Babes in Toyland, and Miracle on 34th Street. If you start today, you may be able to watch them all before the big guy slides down your chimney.

If fresh yuletide content is what you crave, Disney+ has you covered too. Newly released specials on the streamer include High School Musical: The Musical: The Holiday Special

(chock full of Christmas, Hanukkah, and New Year’s tunes), On Pointe (ballerinas getting into formation for a performance of George Balanchine’s The Nutcracker), and The LEGO Star Wars Holiday Special (Jedi Rey and BB-8 set off to learn more about the Force ahead of the Wookie celebration, Life Day). Consider it Disney+’s gift to you—and one you don’t have to wait until Christmas morning to open.

Speaking of Star Wars—perhaps you’ve shared one of those adorably hilarious Baby Yoda memes or even dressed your dog up like the tiny green Jedi for Halloween, yet you haven’t watched The Mandalorian. Well, you’ll want to fix that—and fast! Transport yourself to a galaxy far far away (and find out Baby Yoda’s real name) by streaming the show’s first two seasons. (The season two finale just dropped on December 18.) If you catch up now, you’ll have the force on your side by the time the next Star Wars installment, The Book of Boba Fett, debuts in December 2021.

5. Spend a Night on Broadway

Live theater may be on hold for now, but the room where it happens is always open on Disney+. Whether it’s your first or 50th time enjoying the musical stylings of Lin-Manuel Miranda’s hit Hamilton (the original cast recording may have been in our Spotify Top 10 for the past four years running), there’s always a new nuance or note to discover in this beautifully shot #Hamilfilm (which co-stars Soul actor Daveed Diggs!).

Santa Claus may not be able to deliver on that date with Captain America you asked for, but you can still spend a night with America’s Ass by watching the man in action on Disney+. The site has 20 Marvel Cinematic Universe movies to choose from, and on January 15, will be debuting the new series WandaVision starring Elizabeth Olsen and Paul Bettany—proving that there truly is no end game when it comes to Earth’s mightiest heroes.

More like this
UK Viewers Will Have To Wait For The Terrifying 'Hellraiser' Reboot
By El Hunt
UK Viewers Will Have To Wait To Watch The Handmaid’s Tale S5
By Maxine Harrison
A New Scooby-Doo Movie Confirmed Velma Is Gay & Twitter Is Pumped
By Radhika Menon
Everything You Need To Know About ‘Black Panther: Wakanda Forever’
By Bustle Editors
Get Even More From Bustle — Sign Up For The Newsletter