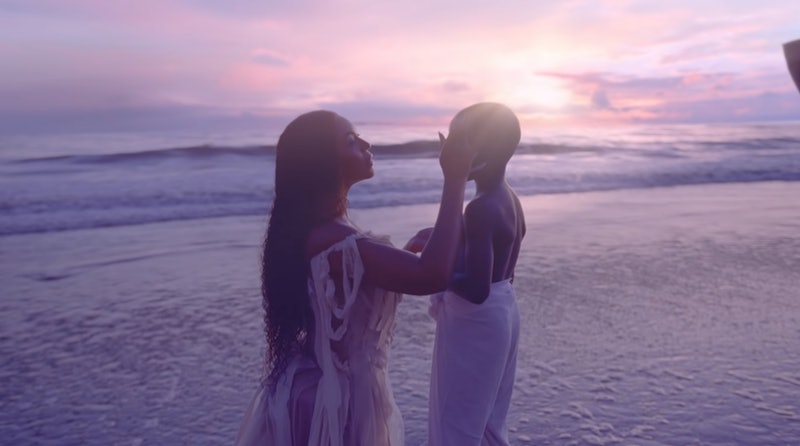 It's been some time since Beyoncé fans have been treated to a proper new album by the artist. Lemonade's release in 2016 marked the last official Beyoncé album release, and though there's been a smattering of new music by her in the years since — mostly related to the release of Disney's The Lion King remake in 2019 — there still remains an ever-lengthening gap in Beyoncé's discography. So when the Beyhive caught wind of Mrs. Knowles-Carter's upcoming visual album for Disney+, Black Is King, fans became hopeful that the album would features some new music from Queen Bey. But when Bustle reached out for comment on whether or not Black Is King will feature new music, Disney wrote, "Black Is King (visual album) is based on the music of The Lion King: The Gift," and did not respond when asked about the inclusion of previously unreleased music in the visual album.

Last year, Beyoncé portrayed Nala in Disney Studios' live-action remake of The Lion King. The film was a massive success, and it currently ranks as the seventh highest-grossing film of all time. A major appeal of the film was the music, of which Beyoncé was a big part. The Grammy-winner sang the classic "Can You Feel the Love Tonight?" alongside co-star Donald Glover, who voiced Simba in the film. And Beyoncé also co-wrote and recorded a brand new track called "Spirit" for the film. Beyoncé also curated and produced a supplemental album of music inspired by the film called The Lion King: The Gift. And it's the music from this album that forms the soundtrack to Black Is King.

The Lion King: The Gift features a number of African artists, as well as a few American artists who will be more familiar to casual fans, including Pharrell Williams, Childish Gambino, Kendrick Lamar, and Beyoncé's husband, Jay-Z. And, of course, Beyoncé herself performs on a number of tracks, most notably on her solo tracks "Spirit" and "Bigger," and on the collaboration "Brown Skin Girl," which features her daughter, Blue Ivy Carter. The full song tracklist for The Lion King: The Gift is below, excluding the numerous Lion King-related interludes that appear on the album.

The music, much of it African-inspired, will be at the heart of Black Is King, which will contain some form of a narrative story. Disney and Beyoncé's Parkwood Entertainment described the film as "a celebratory memoir for the world on the Black experience," according to Variety, adding, "The film is a story for the ages that informs and rebuilds the present. A reunion of cultures and shared generational beliefs. A story of how the people left most broken have an extraordinary gift and a purposeful future."

More like this
Yes, You Can Stream ‘To Leslie’ In The UK Now
By Sam Ramsden
Twitter Is Overjoyed By Angela Bassett’s Record-Making Oscar Nomination
By Maxine Harrison
You’ll Definitely Recognise The Stars Of Amy Winehouse’s Biopic
By Maxine Harrison
Jemima Khan Used Her Own Life As Inspo For 'What’s Love Got To Do With It?'
By Darshita Goyal
Get Even More From Bustle — Sign Up For The Newsletter
From hair trends to relationship advice, our daily newsletter has everything you need to sound like a person who’s on TikTok, even if you aren’t.