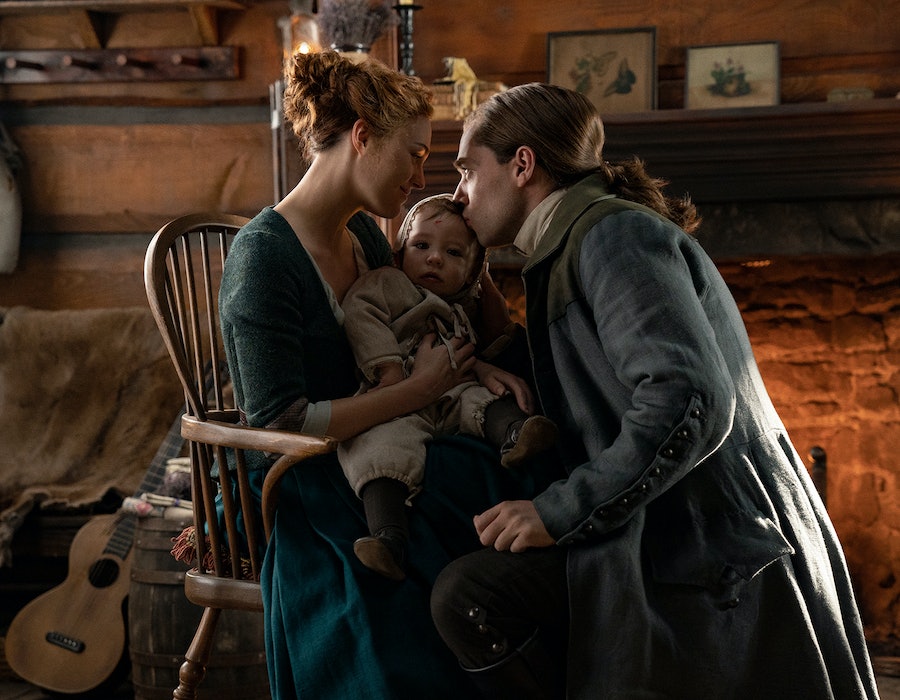 Spoilers ahead for the premiere of Outlander Season 5. Brianna and Roger may have just gotten married on Outlander, but Roger already seems eager to go back through the stones. "Maybe when we go back, we can do all this again, and I'll be a little more prepared," he tells Bree, referring to their lives in the '70s. She looks concerned, but forces herself to smile when he glances back her way.

Judging by promos, this is just the beginning of an ongoing discussion for the couple. In the trailer for Season 5, both Jamie and Claire urge the two to return home because it's safer for them there, but Brianna seems determined to stay. This is likely because Roger sees their time in the 18th century as a pitstop, not a lifetime commitment, while Brianna is content to stay with her parents.

"For Bree, home is where the family is and where her dad is. So I think Bree can settle into this time a lot more than Roger can," Sophie Skelton, who plays Bree, told O magazine.

Season 5 of Outlander is based on The Fiery Cross, the fifth book in Diana Gabaldon's Outlander series (book spoilers ahead!). Though Roger and Brianna do eventually go back through the stones, it's not until after the birth of their second child, Amanda, in the sixth book, A Breath of Snow and Ashes. Claire diagnoses Amanda with a congenital heart defect that requires modern medicine, so they return to the '70s.

This isn't necessarily the same route the show will take, as it's already deviated from the books in several key ways — particularly in regard to Murtagh and Stephen Bonnet's storylines. Most likely, Season 5 is just beginning to lay the seeds for Roger and Bree's eventual journey back through the stones, but if it does happen this season, Outlander will have headed into a particularly trippy time warp that will have a major impact on how the show follows the books.