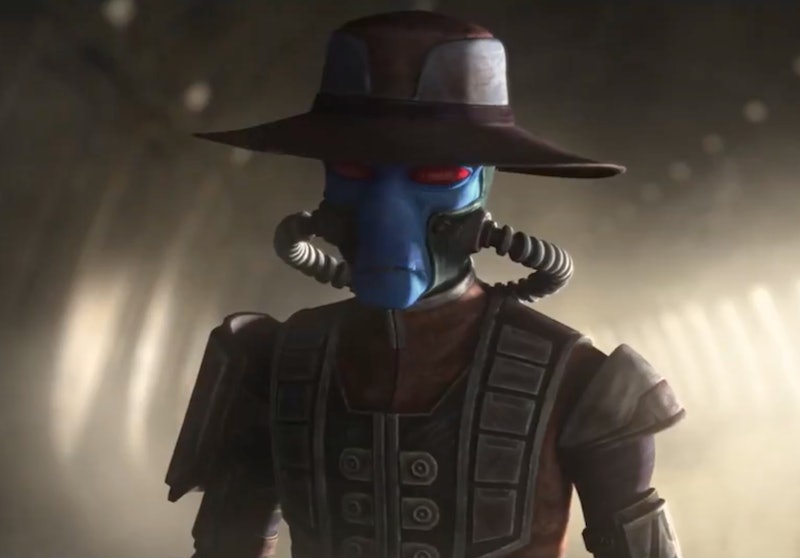 As the first spinoff of The Mandalorian, The Book of Boba Fett follows bounty hunter Boba Fett (Temuera Morrison) and Fennec Shand (Ming-Na Wen) as they navigate the criminal underworld and stake their claim on Jabba the Hutt’s former territory. While details about the overarching story beyond that have been kept under wraps, this plot point has led to theories that bounty hunter Cad Bane will be in The Book of Boba Fett as well. Not only has Cad worked for the Hutt crime family in the past, but notably he was also the mentor of Boba Fett — and if there’s one thing that the Star Wars franchise loves, it’s confrontations between men and their mentors/father figures.

According to his official StarWars.com Database bio, Cad Bane was born on the planet Duro and was briefly mentored by Jango Fett, the template for the clones who also raised Boba as his own son (who, yes, is a clone of Jango). Over time, Cad became the preeminent gun-for-hire and was a reoccurring villain in the animated series The Clone Wars and Rebels. Known for being cold, cruel, and calculating, Cad was often hired by villains like Count Dooku and Darth Sidious, which pitted him against various Jedi like Anakin Skywalker, Obi-Wan Kenobi, and Mace Windu.

Some time after the war, Cad mentored a young Boba Fett as repayment for being taught by Jango. But this mentorship would eventually culminate in a standoff between the two in which Boba would gun down Cad. This has never been depicted on screen, though. As Clone Wars producer Dave Filoni revealed at a 2017 Star Wars Celebration, their relationship was meant to be explored in future Clone Wars seasons, but plans were scratched after the series was canceled in 2014. The show was brought back for a final season in 2020, but with only 12 episodes to wrap up everything, several plot lines were left on the cutting room floor.

At the panel, Filoni did share some of the unfinished footage, as Den of Geek reported. It showed a young, overly confident Boba trying to protect a group of people being held hostage by Cad and some other bounty hunters. In the clip, this leads to them having a quick-draw duel in which both of them get shot. The footage didn’t show Cad’s fate, but you see Boba survive thanks to his helmet stopping the bullet — which would have explained how his armor got that signature dent. Filoni said that the backstory for Boba’s helmet dent was pitched by George Lucas himself, but that idea has yet to be revisited on screen since Clone Wars. It’s very possible we could finally see a confrontation between the two of them in The Book of Boba Fett.

It’s also important to note that Cad reappeared in Filoni’s 2021 animated series The Bad Batch, which is a spinoff of Clone Wars and contains many of its unfinished ideas around the clone troopers. While Boba is not in Season 1, the show notably features a younger Fennec, who is tasked with protecting Omega, the sole female clone of Jango. While rescuing Omega, Fennec runs into Cad, who’s also been hired to kidnap Omega. The two fight, and Fennec manages to best Cad in hand-to-hand combat before literally tossing him overboard — meaning that if Cad does appear in The Book of Boba Fett, it likely won’t only be Boba whom he’ll have a score to settle with.

The Book of Boba Fett is now streaming on Disney+.