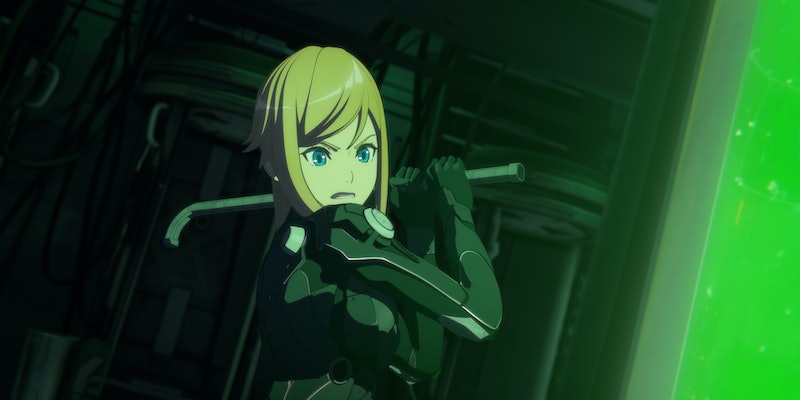 The apocalyptic anime Pacific Rim: The Black (inspired by the two live-action movies of the same name) hit Netflix on Mar. 4, introducing a new set of viewers to the war between the Kaiju and Jaegers. Season 1 of Pacific Rim: The Black is a continuation of the universe depicted in director Guillermo del Toro's 2013 film and Steven DeKnight's 2018 follow-up. This time, the lore is given a new spin by co-showrunners Craig Kyle (Thor: Ragnarok) and Greg Johnson (X-Men: Evolution). Fans of the Japanese-American anime were able to indulge in seven new episodes of adventures starring siblings Taylor and Hayley. But the fast-paced series might leave some viewers wondering if Pacific Rim: The Black will return for Season 2.

The first season takes place in Australia and after the period when Jaeger robots had the ability to battle Kaiju creatures that arose from the Pacific Rim. When viewers are re-introduced to this fictional world, Kaiju has seized Australia with unprecedented numbers, leading to widespread evacuation. The only pair equipped to stop the monsters are teen siblings Taylor and Hayley Travis, who must locate their missing parents and learn how to co-pilot a run-down Jaeger defense mobile weapon as their only means of survival. In the English version, the Travis siblings are voiced by Gideon Adlon of Netflix's The Society and Calum Worthy of American Vandal. The Japanese edition sees Yui Shimodaya and Yūsuke Kobayashi play the roles. All four voice actors would likely return for a second season.

As for official word on Season 2, Netflix reportedly ordered two seasons of Pacific Rim: The Black back in 2019. Sites including ScreenRant and IGN have reported that a second season of the anime spinoff is coming. According to IGN, Legendary Entertainment's Elie Dekel confirmed the two-season order at Project Anime, telling the audience, “[This is] one of the biggest budget anime series I’ve had the pleasure of working on, and I think that speaks to the commitment of Netflix and Legendary [to anime].” That said, a release date will likely be a ways away, given the production required on animated projects.

While a second season of Pacific Rim: The Black is seemingly confirmed, fans shouldn't hold their breath for Pacific Rim 3 on the big screen. Earlier this year, del Toro teased a possible crossover between the Pacific Rim and MonsterVerse (Godzilla and King Kong) movies on Twitter. However, he walked his idea back in a follow-up tweet, writing, "Talking only as a fan BTW - NO plans to return."

So, if you've burned through all seven episodes and are in need of another installment, it appears that a second season could be in the cards.