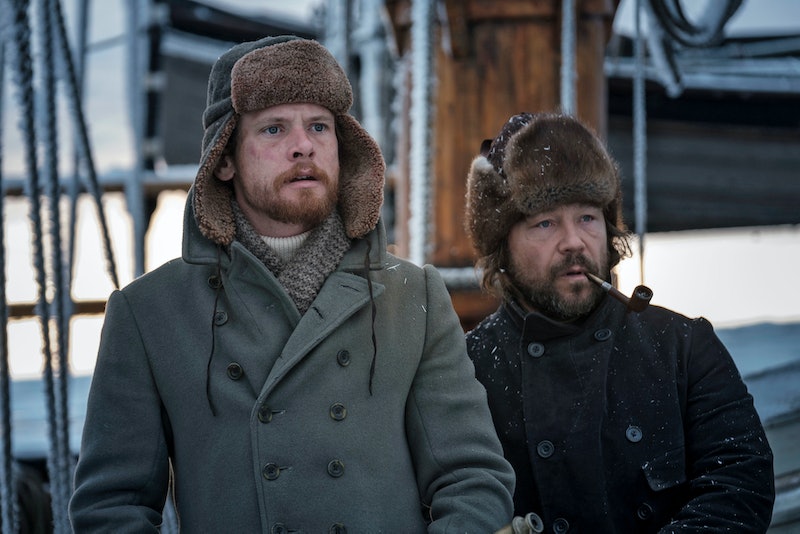 Packed to the brim with suspense, gore and action, BBC Two’s The North Water did not hold back. Adapted from Ian McGuire’s novel of the same name, The North Water follows the story of Patrick Sumner (Jack O’Connell), a ship’s doctor who joins a whaling expedition bound for the Arctic in the late 1850s. As viewers navigate the dangerous and fatal waters alongside the characters, there’s one question on everyone’s lips. Will there be a Season 2?

Colin Farrell, Jack O’Connell and Stephen Graham bring life to a vibrant group of characters. From Henry Drax (Farrell) the sinister psychopath to Patrick Sumner, a broken man trying to find a new purpose to his life, there were plenty of complex characters for viewers to get to grips with.

Following a “hugely successful launch” on AMC+ streaming service in the US in July, per the BBC, The North Water has also received praise after it aired in the UK on BBC Two in Sept. 2021. While viewers are now able watch the whole of Season one on the channel, there has yet to be an announcement confirming a second season. However, the show’s creator writer and director Andrew Haigh did tell the BBC that it was a “once in a lifetime opportunity” which may or may not translate to once in a lifetime series.

“Making this series was a once in a lifetime opportunity and I couldn’t be prouder of what we were able to achieve,” Haigh said. Graham also praised the show in a statement to the BBC, “Filming on the ship was an incredible experience and one that I will never forget”. With such enthusiasm from cast and crew, here’s hoping it leads to a second series.

The plot itself has potential to be expanded, with secrets and experiences yet to be explored for the characters if the show was to be renewed. Shows aired by the BBC typically have an annual cycle, so we could expect to see it return to our screens late 2022.

All five episodes of season one are available to watch on BBC iPlayer.

More like this
'Bridgerton' S3 Will Show A *Very* Different Side To Kanthony
By Sam Ramsden
Olivia Colman Stars In First-Look Trailer For BBC's 'Great Expectations'
By Sabah Hussain and Sam Ramsden
Twitter Simply Couldn’t Cope With The ‘Happy Valley’ Finale
By Sophie McEvoy
Claire Foy Spoke Out About 'The Crown's Gender Pay Gap
By Sam Ramsden
Get The Very Best Of Bustle/UK
Sign up for Bustle UK's twice-weekly newsletter, featuring the latest must-watch TV, moving personal stories, and expert advice on the hottest viral buys.