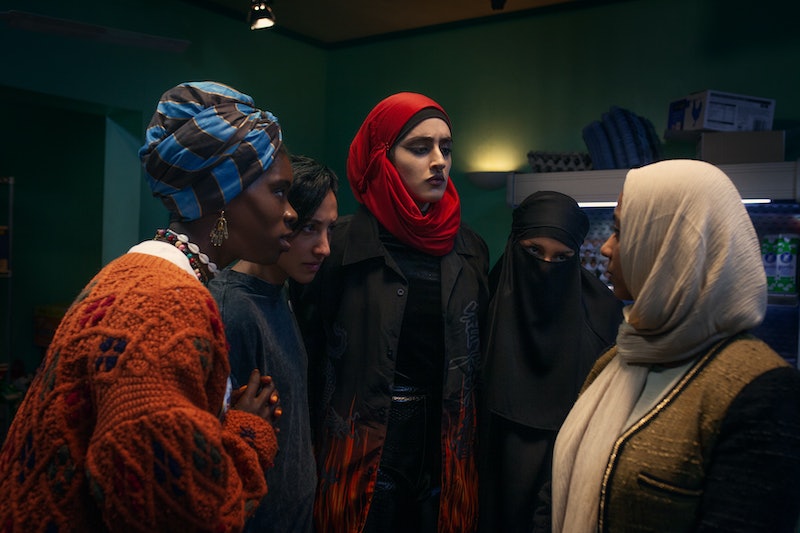 We Are Lady Parts is C4’s latest success story, following in the footsteps of Derry Girls with a female-led cast and pitch perfect comedy writing. Over the course of six episodes, the all-female Muslim punk band find their footing in the music scene and set their sights on playing as many gigs as they can. The series ends with a pretty optimistic outlook, but will there be a We Are Lady Parts season 2?

For now it seems the show is in television limbo. A rep for Channel 4 tells Bustle that there’s “no news yet” as to whether it will return, and there doesn’t seem to be any info online suggesting that We Are Lady Parts is a one series deal, nor anything to suggest it has been commissioned for a second season. So time will tell the fate of We Are Lady Parts, but hopefully, the outcome is that Amina, Saira, Ayesha, and Bisma return and potentially hit the road on the first Lady Parts tour.

Described by Vogue as “a riotous comedy that’s unlike anything you’ve seen before,” it’s clear that We Are Lady Parts has been well-received. And even if the series doesn’t return for a second season, its cast members want to take the series to the next level – by performing as Lady Parts at real events.

“I’d love to get artist passes to all the festivals as Lady Parts, and just walk around,” Sarah Kameela Impey, who plays Saira, told the Guardian. “My dream is to hear a Lady Parts song in the background when I’m in the shopping centre,” Faith Omole, who plays Bisma, added. This may soon come true, seeing as the soundtrack to the series is now available to stream.

All in all, while there’s no news on We Are Lady Parts returning anytime soon, there seems to be some semblance of hope that the band will reunite and educate the masses with punk music.