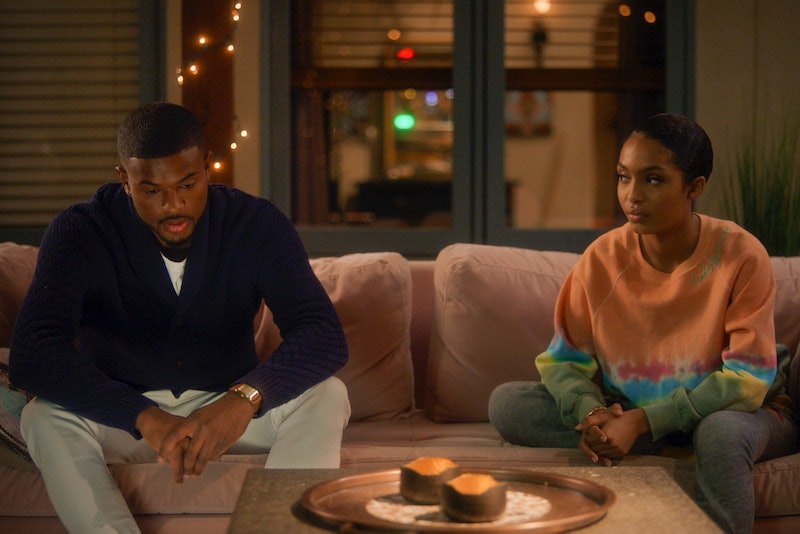 Even though Aaron wasn’t too happy that Zoey waited until he was in a new relationship to confess she’s in love with him, the on-again, off-again pair finally gave in and had sex in the March 11 episode of grown-ish. “Once Rochelle is removed from the situation, then Aaron and I will be together,” Zoey told Ana afterward. “Cue the fairy tale, complete with our little happily ever after ending.” But not so fast.

That happy ending was cut short almost immediately when Zoey spotted Aaron walking through campus hand-in-hand with Rochelle. Later, he explained to Zoey that while what happened between them “was a big deal” to him, it wasn’t enough to erase three years worth of drama just so they could “magically be together” again. With graduation approaching — and CalU waiting on a decision about his private prison divestment campaign’s future — he said he simply needed some time to think about things, even though he felt bad for putting both Zoey and Rochelle in such a “confusing, uncomfortable situation.”

Still, Zoey couldn’t shake the feeling she’d played herself, continuing to insist that Aaron was relegating her to being his sidepiece. That’s when their conversation went all the way left, with Aaron instead describing Zoey as “the girl that floats in and out of my life whenever she wants and just kind of screws with my head.” Afterward, Zoey said in voiceover she’d never “felt so bruised by the intense game of love.”

That was before she talked to Rochelle, who apologized for asking Zoey to take a step back from Aaron. “Clearly there’s nothing going on between you two, and the fact that I jumped to conclusions because a woman has a guy as one of her best friends is just one of the worst things a woman can do to another woman,” Rochelle — oblivious to Aaron’s cheating — explained. “Moving forward I’d really like it if we could all three be friends.” Awkward.

There’s still one more episode to go before the Season 3 finale, but fans shouldn’t expect a neat resolution to all this mess. Freeform recently announced grown-ish will return for Season 4 this summer, and with such a short wait between seasons, the writers will likely let this play out for a while before bringing it to a conclusion. But viewers have made clear what they want to see happen.

“Don’t play with us!! Aaron better drop Rochelle and get with Zoey,” one fan tweeted, while another added that the two “belong together” because they’ve been “holding each other down” for such a long time. Another viewer even asked the writers to “please stop with the drama [and] just let Zoey and Arron get back together,” adding that everyone knows “that's where this is headed” anyway.

More like this
Miriam Haart & Girlfriend Nathalie May Have Broken Up After 'My Unorthodox Life'
By Brad Witter
Robert Brotherton's Boyfriend Ra'ed Saade Competed On Several Reality Shows
By Brad Witter
We’ve Got A Text! Another 'Love Island' Series Is On The Way
By Darshita Goyal
Who Is Pete Davidson Dating? He "Courted" Emily Ratajkowski At A Knicks Game
By Jake Viswanath
Get Even More From Bustle — Sign Up For The Newsletter