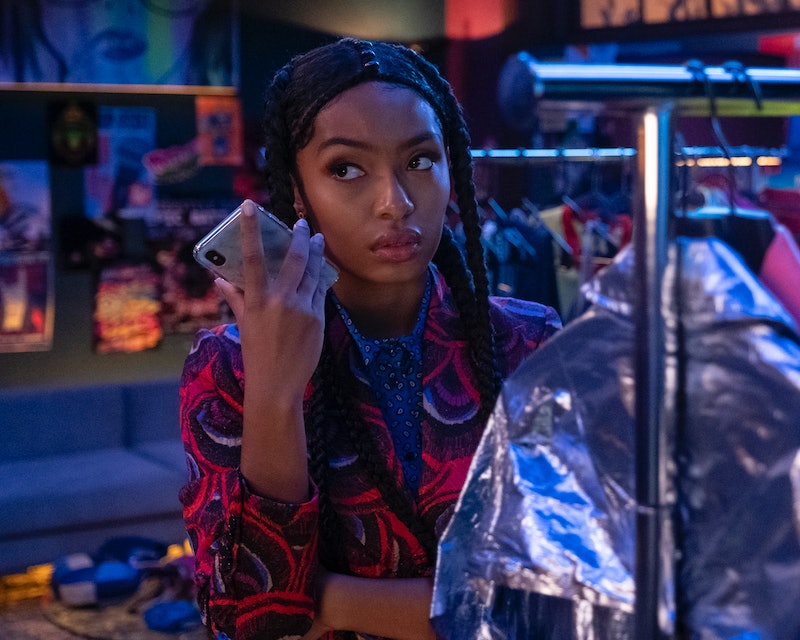 Spoilers ahead for grown-ish Season 3, Episode 13. Life has kept moving forward since Zoey dropped out of CalU, and "your girl" isn't too happy about it. After a few days back on campus in the Feb. 18 episode of grown-ish, Zoey lamented that, the "worst thing about coming home and finding out everything [has] changed' is having to "leave again before [you've] had a chance to make any sense of it." She then wondered how much else would be different the next time she comes back.

This implies Zoey is having some doubts about her decision to leave school and pursue a career in styling, though she mostly seemed to be upset about the way her friends' lives were changing without her. After discovering Ana had put together a nursery for Nomi (who will return in the Feb. 25 episode), Zoey regretted not being part of it. Ana assured her that nothing else had changed, but was swiftly proved wrong when Jazz announced she'd had her first one-night stand following her NCAA championship win. (Oh yeah, and Ana forgot to mention she's newly baptized and abstaining from sex.)

Zoey's feeling of being left out came to a head when she wasn't allowed into the "biggest event of the school year" — CalU's field day — because she's no longer a student. Zoey wasn't around to hear her, but Sky also made a few choice digs about her friend's life choice. "As a college dropout, this is the first of many doors that will be slammed in her face," including "a stable career, a 401K, and, I hate to say it, but a respectable husband," she said.

If all of this FOMO, plus Zoey's rocky relationship with her celebrity client Indigo, isn't enough to inspire a return to CalU, her relationship with Aaron might be. Thanks to a chance meeting at Titanium, he relied on her for advice about whether or not to accept the school's offer to forgive his student loans in exchange for dropping his private prison divestment crusade. Naturally, Aaron's new girlfriend Rochelle was none too happy when she found out about this, so maybe he'll be single again soon?

Then again, Yara Shahidi, who plays Zoey, previously told Complex she was "glad" the writers made the decision for Zoey to drop out of college, so this may just be an honest exploration of the complicated feelings that come with taking a less traditional path. "I think we couldn't do justice to the experience of growing up without having characters explore alternative paths," she said. "[It was important to show somebody like Zoey] make that decision and be able to not sugar coat either experience of being in school or be[ing] out in the world, knowing that they have benefits and detriments for every person."