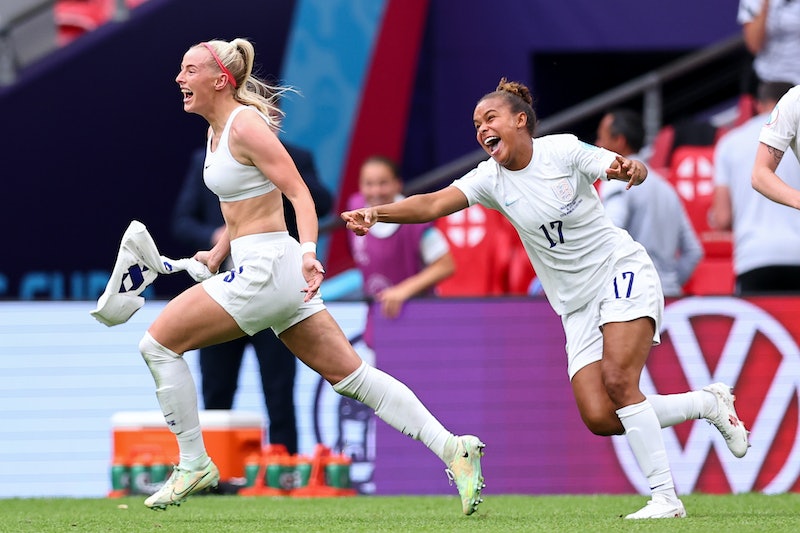 It’s come home! For the first time since the 1966 World Cup, England has taken home the trophy in a major football tournament, with the Lionesses winning the Euros 2022, beating notoriously tough opponents Germany in the second half of extra time. With 17.6 million fans tuning in to watch on TV, and a Wembley crowd of 87k that smashed through all previous records for both men’s and women’s games at the stadium, the win wasn't just a huge moment for Sarina Wiegman and her unstoppable squad. It’s also a watershed moment for women’s football as a whole — expect huge investment in the sport, likely knighthoods for many of the England squad, and a whole new generation of inspired young players eager to take up the mantle.

In a tense match that saw England blazing ahead thanks to a flawless chip from Manchester United striker Ella Toone, before losing their lead in the final seven minutes, it was nerve-wracking, thrilling stuff watching the Lionesses battle it out in extra time. After bouncing back from a nasty ACL knee injury that almost ended her football career, Manchester City striker Chloe Kelly picked the right night to score her first ever international goal in the final ten minutes, winning the game.

And aside from those glorious goals, the victory was filled with iconic moments, both on and off the pitch. Here are some of the highlights: from Russo attempting to read a German tactics note to the team’s epic celebrations.

The composure, the precision, and not to mention the flawless pass from Kiera Walsh and the world-class finish. Excellent stuff from Ella Toone all round.

Evoking memories of U.S. soccer player Brandi Chastain, who celebrated in similar style after scoring a winning World Cup penalty against China way back in 1999, this felt like a fitting tribute from Kelly.

Russo tries her hand at espionage

Russo has already earned legend status after scoring a back-heel nutmeg goal (through the legs of the goalie) in the Lionesses’ semi-final face-off against Sweden, but her antics during extra time at the final ranked up there. When Germany’s manager Martina Voss-Tecklenburg sent a secret tactics note onto the pitch during the final minutes of extra time, Russo had an admirable go at sneaking a peek. Who knows, maybe she can read German?

The Euros has marked a hell of a comeback for Chloe Kelly, who almost had her entire footballing career ended by a nasty knee injury that ruled her out of last year’s Tokyo Olympics. And after scoring the match’s winning goal during a penalty box scuffle, with a quick-thinking get-the-job-done whack into the nets, is it any wonder she was eager to celebrate with her team? When Sweet Caroline started blasting into the packed stadium, she gracefully sacked off a TV interview to join in — but not before treating us to a few bars.

After a challenge by German midfielder Sydney Lohmann, the squad’s most experienced player Jill Scott didn’t hesitate to speak her mind, leading the BBC’s commentators to apologise to viewers at home. Put it like this, you don’t need to be an expert lip-reader to figure out what she’s saying.

Last night, Mary Earps treated us to some excellent on the ground reporting into the Lionesses’ big night out — an early hint of things to come. And to quote captain Leah Williamson this morning: “I’m feeling a little bit rough.” Presented without comment, and tbh, good on them!