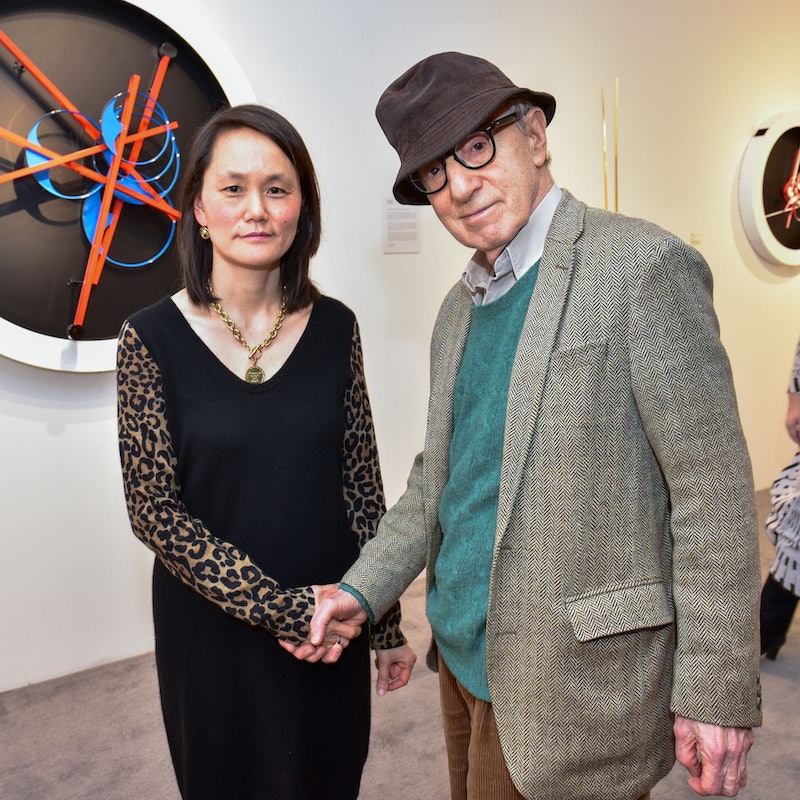 Narrated largely by Mia Farrow and her adopted daughter Dylan, HBO's new docuseries Allen v. Farrow is a damning examination of the sexual assault allegations Dylan made against Mia's ex-partner — the famed director Woody Allen — when she was 7. (Allen has long denied Dylan's claims.) The premiere episode primarily focuses on Allen and Mia's relationship and the "inappropriate" behavior Allen exhibited toward Dylan throughout it. But near the end, it pivots toward Mia's discovery of Woody Allen's relationship with Soon-Yi Previn, her other adopted daughter.

As Mia Farrow explains in the episode, she was picking up a jacket left at Allen's apartment when she noticed "pornographic" pictures of a woman on his bedside table. Disturbingly, they were nude Polaroid pictures of Previn, then a college freshman. This revelation threw the family into chaos. "I remember my mom told me and Ronan, 'Daddy took naked pictures of Soon-Yi,'" Dylan says in the episode. "And that was sort of the first instance where I thought, 'Oh… it's not just me.'"

Allen and Previn married several years later, in 1997, and eventually adopted two kids. They're still together today, but the exact timeline of their relationship is a complicated one. Here's a breakdown.

According to her adoption papers, Soon-Yi was born on Oct. 8, 1970. “I remember being extremely poor,” Previn told Vulture of her childhood in a 2018 profile. "And then I decided one day to run away."

Per The New York Times, Mia Farrow and her ex-husband André Previn adopted Soon-Yi from Korea under the organization Friends of Children. (Per Vulture, Farrow had to challenge federal law in order to adopt Soon-Yi, as families were only allowed two international adoptions at the time and she already had two children from Vietnam.)

Allen and Farrow are introduced at Manhattan restaurant Elaine's after meeting in passing several years earlier. They later begin a relationship and collaborate on 13 films together, with Farrow often starring as the lead. At the time, Farrow was 34 and divorced with seven kids. Allen was 43 and told the New York Times that while Farrow loved kids, he liked to spend his time "with work and only a limited time with kids."

Per Vulture, Farrow first introduced Allen to the family when Previn was 10. She immediately hated him. "Woody wasn’t interested in meeting us children. And the feeling was mutual; we weren’t interested in meeting him," Previn told the outlet. "I hated him because he was with my mother, and I didn’t understand why anyone could be with such a nasty, mean person. I thought he must be the same way."

Farrow adopts a baby girl, Dylan Farrow. In Allen v. Farrow, Farrow says that Allen was resistant to being a father, but was open to the idea if they could adopt "a little blonde girl."

Previn told Vulture that her first "friendly encounter" with Allen occurred when she was in the 11th grade. She broke her ankle playing soccer, and Allen suggested she see a doctor and then offered to take her to school.

Around this time, Allen and Previn started going to Knicks games together. "I think Woody went after me because at that first basketball game I turned out to be more interesting and amusing than he thought I'd be," Previn said.

Allen testified in court during a 1993 custody battle that his sexual relationship with Previn began "a few days after Christmas" in 1991, when she was home for the holidays from her freshman year at Drew University in New Jersey. He was 56 and Previn was 21. He admitted that "at the very outset, it didn't occur to me that [the relationship] would be anything but a private thing."

According to Dylan Farrow, this is the day Allen sexually assaulted her. (Allen has repeatedly denied the allegations.)

Allen releases a statement confirming his relationship with Previn to the press, saying, "It's real and happily all true."

A day later, he says he's "saddened" by Mia Farrow's accusations of child abuse, calling them "false" and "outrageous."

In a Newsweek article, Previn speaks out for the first time. She claimed that Allen was "never any kind of father figure" to her and rarely spoke to her growing up. "Only when Dylan was born did he start visiting regularly," she said.

"When I first got friendly with Woody, he and Mia were finished with their romance," she continued, adding that they bonded over films, sports, and art. "I think Mia would have been just as angry if he had taken up with another actress or his secretary." She also alleged that Mia was "violent" with her, and that the allegations that Allen assaulted Dylan are "ridiculous." (Mia, through a family spokesperson, refuted all claims of physical abuse and neglect to Vulture).

After a seven-month inquiry, a team of child abuse investigators assert that Allen did not sexually assault Dylan Farrow. Mia Farrow's legal team calls the report “incomplete and inaccurate." A month later, a child psychologist slams the report as "seriously flawed."

Allen loses the custody battle for Dylan, Moses, and Ronan Farrow. Acting Justice Elliott Wilk of the State Supreme Court states that Allen was "self-absorbed, untrustworthy and insensitive," and denied him visitation rights to Dylan. Allen attempts to appeal the case, but it is denied in May 1994.

Allen marries Previn. Allen's publicity agent told The New York Times that they married "because the timing felt right for them." Allen had just finished filming Deconstructing Harry, and Previn was graduating with a master's degree in special education from Columbia University.

Per the New York Post, Allen and Farrow reveal they have an adopted an infant daughter, Bechet Dumaine Allen.

In a Time magazine interview, Allen says he had a "perfectly healthy" relationship with Previn, and that there was "no downside" to getting together with her. "The heart wants what it wants," he said. "There's no logic to those things. You meet someone and you fall in love and that's that."

In a Vanity Fair interview, Dylan Farrow goes on record for the first time about Allen's alleged abuse. On Feb. 1, 2014, she pens an open letter recounting her experience with Allen for the New York Times.

In an interview with NPR, Allen calls his relationship with Previn "paternal." He adds that he "liked her youth and energy" and that she "deferred" to him. "I was happy to give her an enormous amount of decision-making just as a gift and let her take charge of so many things," he says.

The #MeToo movement begins after a New York Times article reveals Harvey Weinstein's long history of sexual harassment, abuse, and rape (Weinstein denied the claims but was found guilty of criminal sexual assault and rape in the third degree in February 2020). Allen says that Weinstein is "a sad, sick man" but cautions against a "witch hunt atmosphere."

Dylan Farrow writes an article for the Los Angeles Times titled, “Why has the #MeToo revolution spared Woody Allen?”

Vulture publishes a long interview with Soon-Yi Previn, in which she accuses Farrow of bad parenting and defends Allen.

Dylan Farrow then criticizes the piece, noting that the author, Daphne Merkin, has been Allen's close friend for decades. "The author has written about her friendship and infatuation with Woody Allen,” Farrow tweeted. “The idea of letting the friend of an alleged predator write a one-sided piece attacking the credibility of his victim is disgusting."

Today, Allen and Previn live in Manhattan's Upper East Side. Both parties have repeatedly denied all of Dylan Farrow's allegations. "'What's happened to Woody is so upsetting, so unjust," Previn told Vulture. "[Mia] has taken advantage of the #MeToo movement and paraded Dylan as a victim. And a whole new generation is hearing about it when they shouldn't."