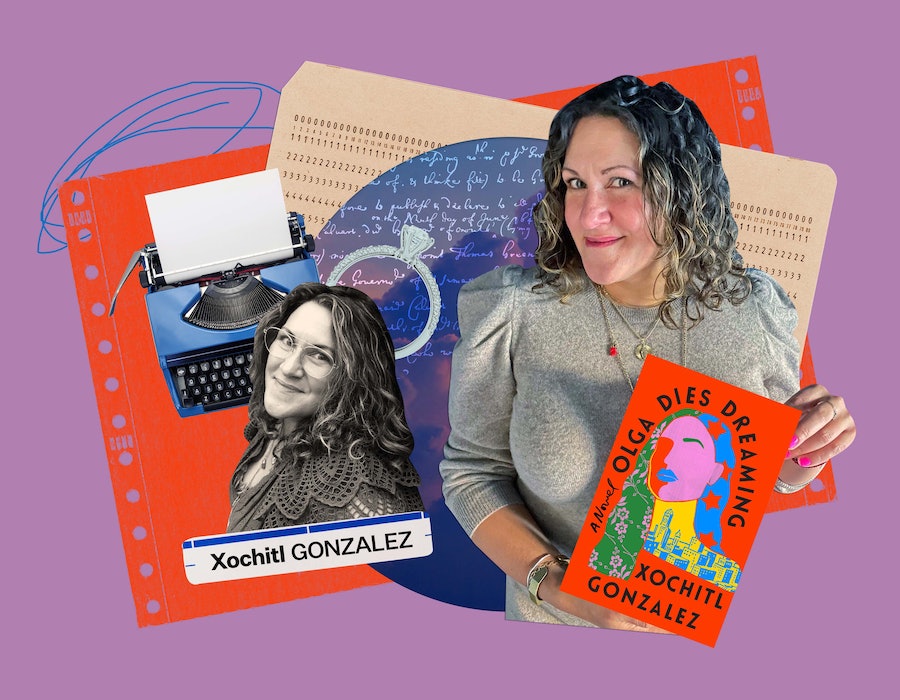 Sean Gladwell, Torriphoto/Getty Images, Xochitl Gonzalez
So You Want To Quit Your Job

What does it take to change your life entirely? Is it simply a decision to do a different kind of work, to live somewhere new, to break off a current relationship — or does it take something else altogether? For Xochitl Gonzalez, it was the latter. She’d spent the previous 15 years as a business owner, having cofounded a successful wedding planning company in Brooklyn, New York that catered to wealthy clients. She’d also penned magazine columns on wedding etiquette, and appeared on a similarly themed reality TV show for a time.

But just before Gonzalez’s 40th birthday in 2017, her grandmother passed away, leaving the Brooklyn native a financial nest-egg that would enable her to spend more time writing — her lifelong dream deferred. “My grandmother’s sweet ghost gave me confidence,” she tells Bustle.

In January, she released her debut novel, Olga Dies Dreaming, about a Nuyorican wedding planner who’s aiming for the seemingly dissonant goal posts of both family and career fulfillment. It’s already earned lauded industry reviews and is being adapted into a Hulu pilot — which Gonzalez is writing and executive producing — starring Aubrey Plaza and Jesse Williams. It’s a story the Nuyorican author, who’s now 44, hadn’t thought feasible for herself. And it took quitting and starting over to get there.

Back in 1995, she’d arrived as a first-year student at Brown University, with a heavy dictionary in hand. Her grandfather had inscribed her name on the book’s spine, so that “nobody would steal it.” Gonzalez had been raised by her grandparents in Brooklyn — him, a nighttime janitor; her, a public school lunch lady — who hadn’t attended professional school or college. She arrived in Providence, Rhode Island, then, with “class dysmorphia,” she says. “I felt like writing was ‘someone else’s thing,’” says the author, who majored instead in art history and visual art, “even though I’d wanted to do creative writing at Brown.”

“Don’t let the unfamiliarity of ‘the new’ freak you out. It will become familiar.”

Her suspicion seemed confirmed when her roommate (affluent, white) hit early publishing success. Gonzalez found herself with a unique dilemma: having been allowed entry into an elite, Ivy League space, but without the accouterments of class privilege that were required to take advantage of such an education. “It was like they invited us to dinner but didn’t give us forks and knives,” she says now.

After graduation, she returned to her childhood home in Brooklyn “without a road map,” she says. “I didn’t fit in Brooklyn either, after Brown.” She worked at an art gallery for a bit before realizing it wasn’t financially feasible, given her student debt. Then she took advertising jobs — in which she excelled. “I kept getting promoted, and started getting caught up in validation. I realized then I could have my own business,” she says. At 26, she started Always a Bridesmaid with a close Latinx friend, which provided an artistic outlet. “I’d go through periods of thinking, ‘This is kind of creative,’ but then felt stuck in too-small skin,” she says. “Whenever I felt resentful and frustrated, I tried to respond by changing the business [structure and strategy].” But still, she felt unfulfilled at the end of the day, in part because of her clients’ attitudes: “We were business owners, yet we were treated like the help, like housekeeping.”

When Gonzalez was 36, one of her close friends passed away from cardiac arrest. She was just a few years older than her, and had burnout from overworking in a thankless job. She died in the middle of an intense argument about PTO. A few years later, after her grandmother’s death, Gonzalez’s realization that she wanted to write became a driving force — “[and] not just as a hobby.”

She sold her business to a former employee, got a “day job” in fundraising to pay the bills, and honed her craft during off hours, starting with “little stories.” Soon after, she won a place at the Bread Loaf Writers’ Conference at Middlebury College — a program she remembered from her college roommate’s accolades — and fully immersed herself in writing, working “to get to the point of granting herself permission to write.”

Shortly after, she applied and was accepted to the prestigious Iowa Writers’ Workshop, having centered her application on self-gentrification and the American dream. “A lot of [my] dissatisfaction came from leaving college without models of how to be yourself and ‘have the dream,’” she says. She arrived in Iowa City with an agent and roughly 200 pages of her novel already written, and dove with “laser-like focus” into writing and revision. Unlike her time at Brown, “There was no imposter syndrome because I burned through all that.”

Before she completed the program in 2021, she’d already landed a book deal.

Maybe this is part of how we change our lives, by keeping the strings taut on that deferred dream. For Gonzalez, having a successful first career allowed her to sidestep imposter syndrome in order to pursue it. “What makes change hard are myths like that it’s ‘too late’ or that ‘skills are not adaptable,’” she says. “[But I] learned so much from wedding planning. … Don’t let the unfamiliarity of ‘the new’ freak you out. It will become familiar.”

More like this
Savannah Guthrie Got Her First-Ever Tattoo With This Former Wild Child
By Suzanne Zuckerman
Another Side Of Rupert Grint
By Maria Sherman
10 Equally Romantic & Heartbreaking Books From British & Irish Authors
By Shahed Ezaydi
Jessica Simpson On The Time She Was Pursued By A Backstreet Boy & An *NSYNC Member
By The Editors
Get Even More From Bustle — Sign Up For The Newsletter
From hair trends to relationship advice, our daily newsletter has everything you need to sound like a person who’s on TikTok, even if you aren’t.